Fields of Glory: Around the Midwest GAA
by Vincent Beach 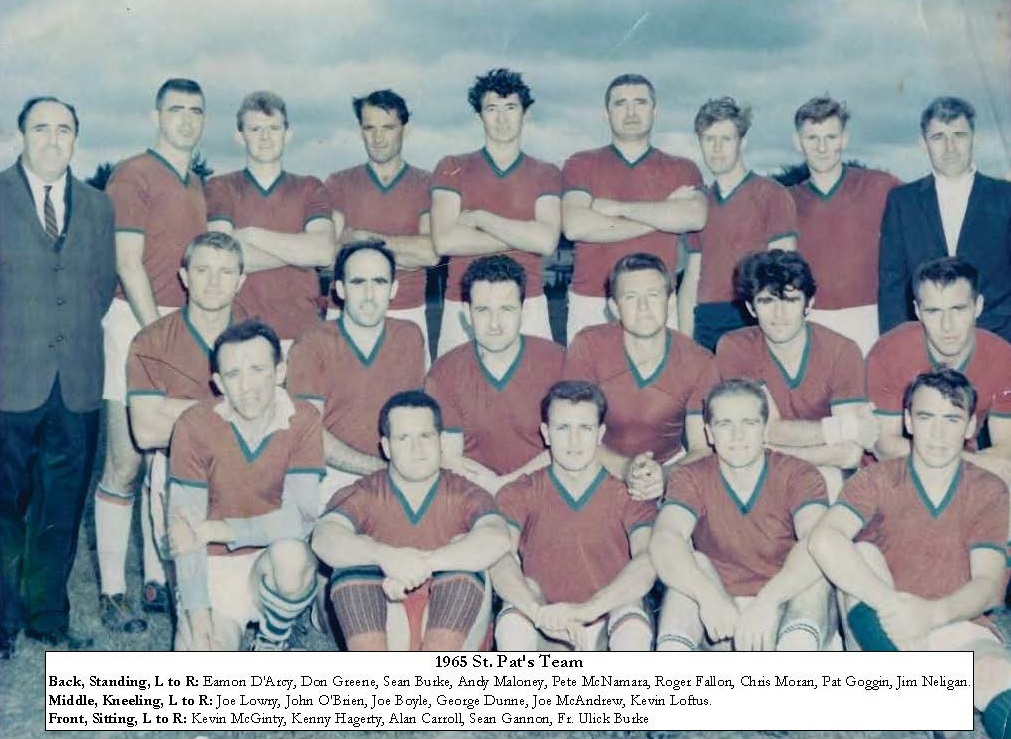 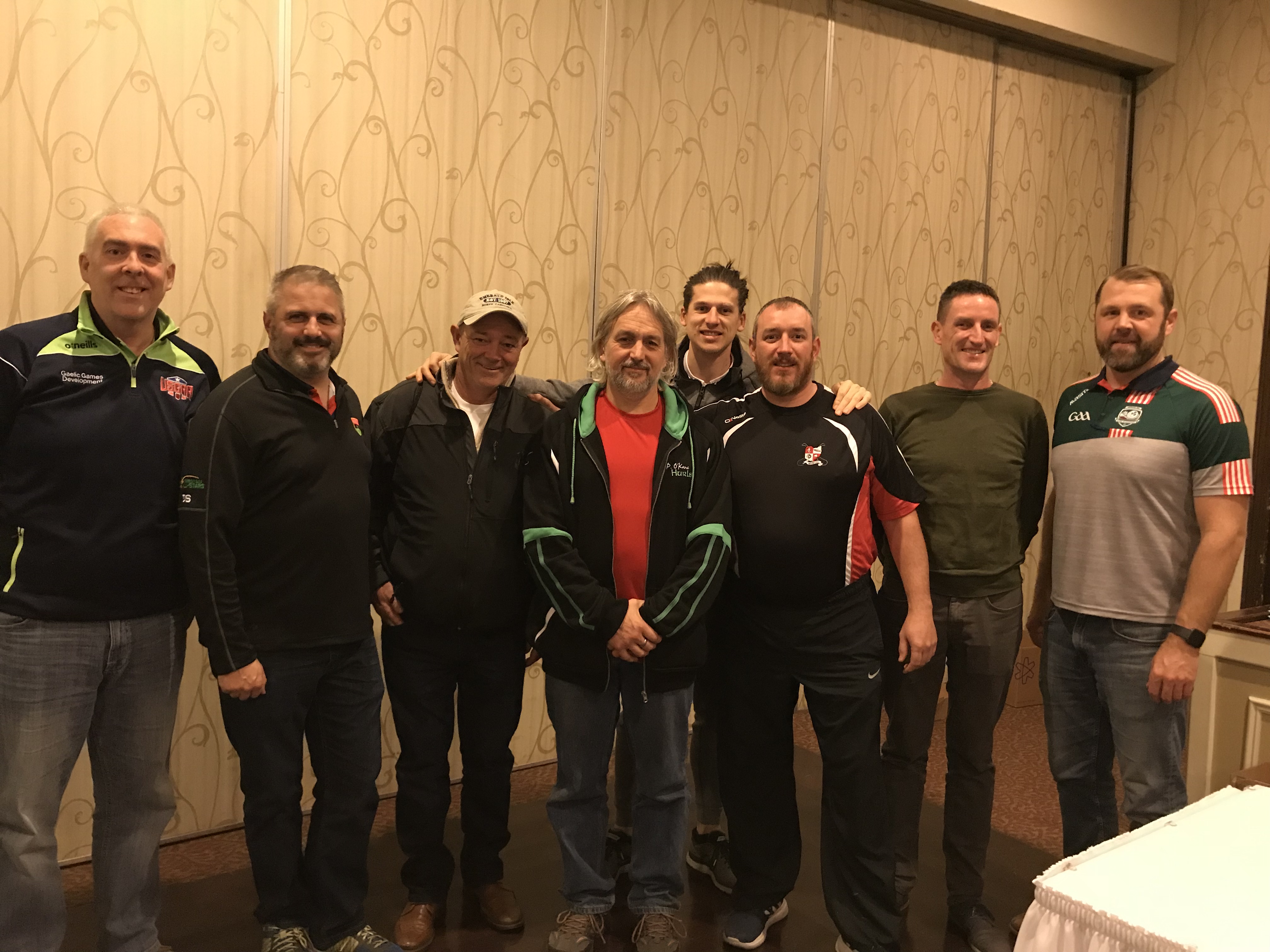 Delegates from clubs and divisions across the country met in Chicago on November 9th& 10thfor the USGAA’s annual convention. Also in attendance were Jerry O’Sullivan, Chairman of the Munster Provincial GAA (of which USGAA is organized as a county), and Niall Erskine Chairman of World GAA.

World GAA comprises of all the GAA organizations outside of Ireland including USGAA, New York GAA, Gaelic Games Europe, Middle East GAA, Britain GAA, Australasia GAA, Canada GAA, and Asia GAA. The USGAA will be sponsored by Masita (uniforms and kits provider) and Guinness.  Tag in your social media @GuinnessUS and your local GAA club @ClevelandGaelic when enjoying ‘a bit of the black stuff’.

This year’s USGAA AGM had more delegates than can ever be remembered.  There are ten divisions across the county and all were well represented: Central (Chicago area), Heartland, Mid-Atlantic, Midwest, Northeast (Boston area), Philadelphia, Southeast, Southwest, and Western (San Francisco area).

The Register’s report had many interesting facts: 178 teams from 130 clubs, 5,394 members, 1,207 resident players (Irish born), 2,713 American born players, and 551 sanction players. The organization remains financially strong, and continues to be supported by the GAA (Croke Park) for increased participation and development.

The Finals are being held in Leesburg, VA., about an hour outside of D.C., a week before Labor Day (August 23-25). Next year’s AGM is in dreary San Diego!

Cleveland GAA Update: Cleveland GAA will be participating in off-season indoor soccer Co-Ed and Men’s leagues.  If you are interested in playing and learning more about Gaelic Football, contact clevelandgaa@gmail.com. 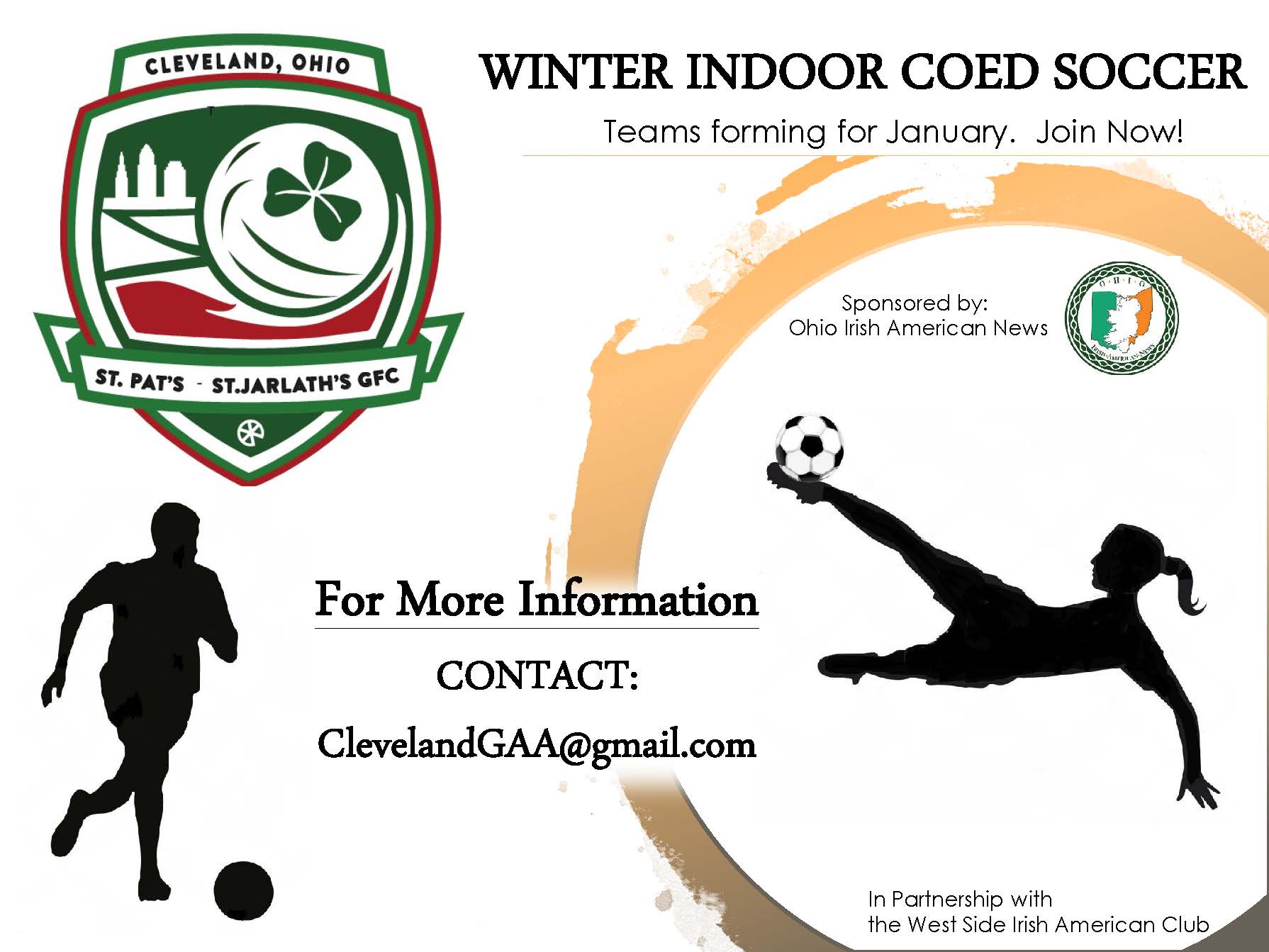 The Cleveland annual general meeting will take place at PJ McIntyres on December 7.  If you have young ones, we will have skills camps to teach the game. Contact us: ClevelandYouthGAA@gmail.com.

Cleveland GAA would also like to announce the arrival of Ladies Gaelic Football Coach Danial Murray, from Knocknacarra, Galway (just east of Craggy Island, so it is).  Daniel will be head coach for upcoming training sessions and the 2019 season. Those interested in playing or learning more should email: clevelandLadiesGAA@gmail.com.

Follow @ClevelandGaelic on Facebook and Twitter for fall and winter activities for Men, Women, and Youth.  Planning is in the works for friendlies, open games, fitness training, and indoor.

Go raibh míle maith agaibh (thanks y’all) to our readers and supporters.  Fáilte (welcome) to all; consider getting involved at any level.

The Gaelic Athletic Association is Ireland’s largest sporting organization and a bit of home for the Irish abroad here in the US.  Beyond sports, the Association also promotes Irish music, song and dance and the Irish language as an integral part of its objectives. 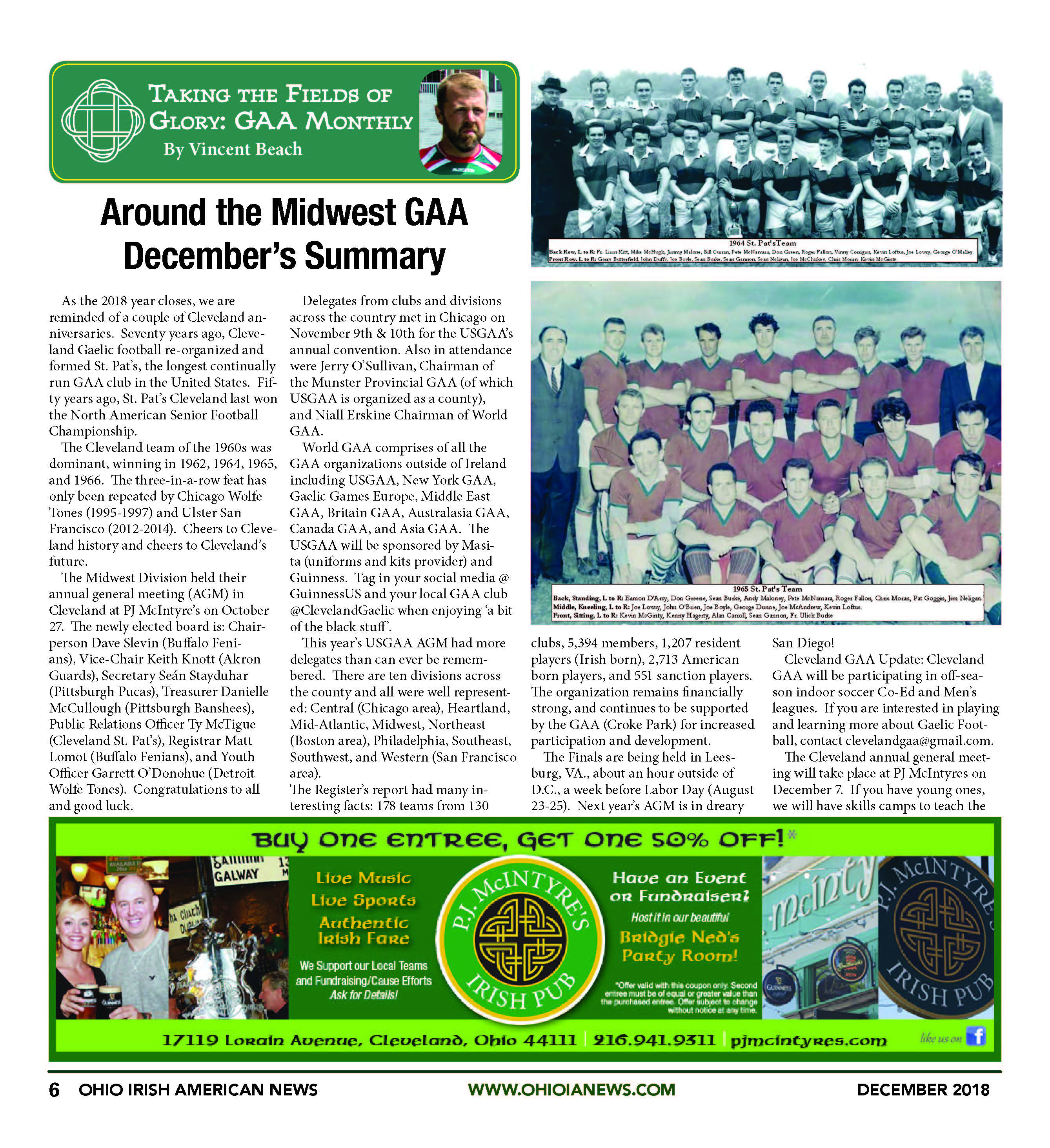 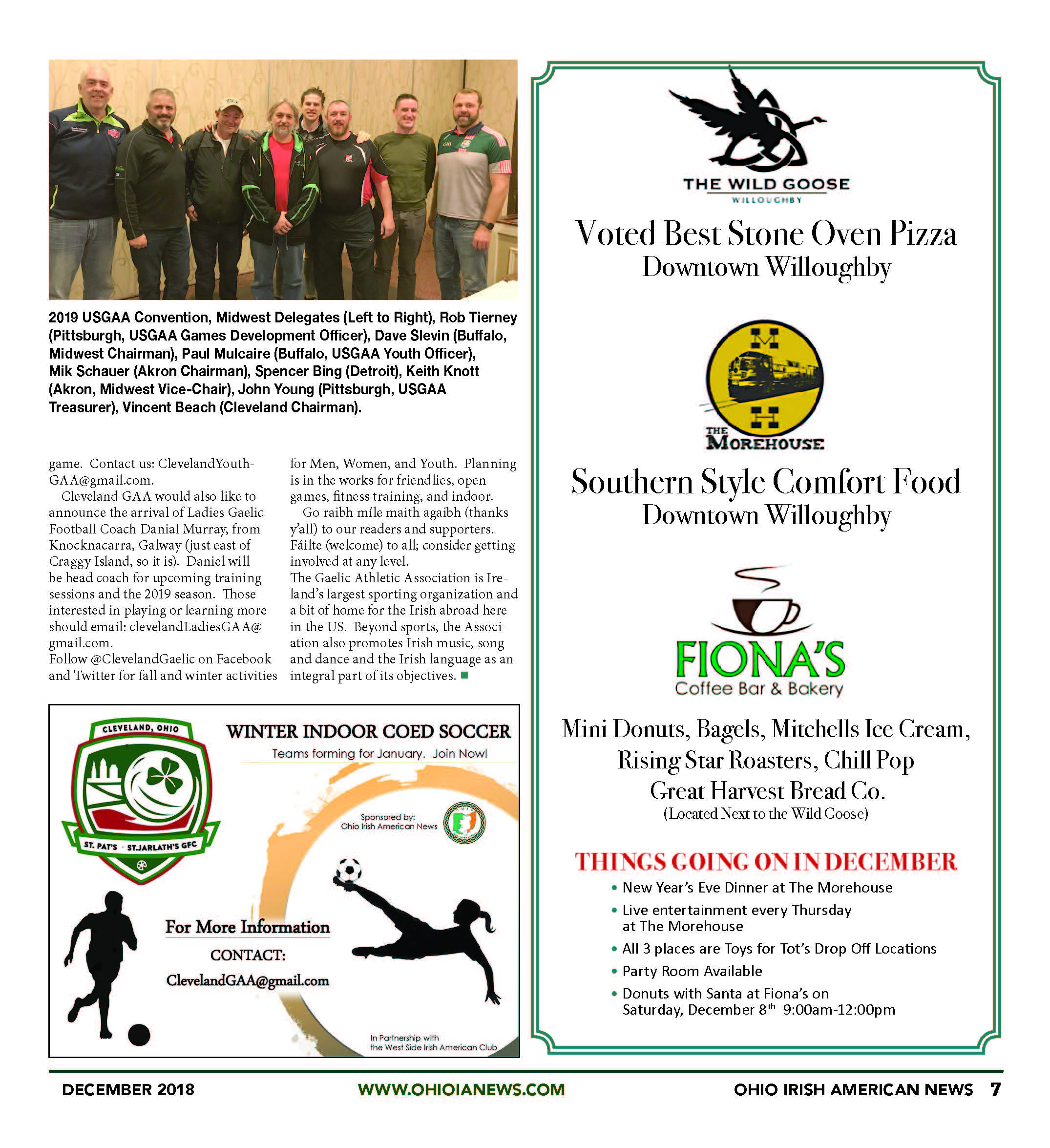 Taking the Fields of Glory with the Midwest Athletic Association (GAA)