Fall is an aptly named season. Yes, leaves fall to the ground, but more significantly, the season itself descends on us like it just fell from the sky. One minute you are sunbaked, barbequing, loving all those long evenings, and then BOOM. Suddenly, it is cold, dark, raining, with darkness dropping way too quickly, like you are enfolded into damp bat wings. No wonder witches and spells are associated with this time of year, because it all seems to happen with supernatural speed.

The gathering dark meant the end of the year to the ancient Celts, culminating in the celebration of Samhain (sah’win) or Halloween. Somehow the Irish tradition of carving gourds to ward off evil spirits has morphed into the season of Pumpkin spice here.

Another unforeseen consequence of the Halloween season are two costumes that are certain to appear, ghosts and witches. Ghosts make sense; Halloween was the day that the dead could roam the earth only to be terrified by your ancient Celtic neighbors’ pumpkin carving job. Doesn’t seem too likely, but …

We take the presence of witches for granted at this time of year, but they seem to have been stuck into the scary Halloween gumbo at a later date.  The Celts did not perceive witches in the varieties that our costumes come in; sexy or monstrous. Early Celtic witches were more spiritual entities for good or bad, often with some type of lamentation connected to them.

Witches as we know them appeared in Ireland earlier than our Salem witch trials, but probably only due to the fact that America was further from England than Ireland was. Witch trials were spread over Europe but seem to have taken hold in England and Scotland and then spread to Ireland.

The supposed witches have one thing in common, they were all non-conformists in some way. On this point, the stereotypes are cemented, for most all of them were women, were unfortunate in appearance, circumstance or both or the other type, the temptress who lured men to some kind of ruin.

A famous Kilkenny witch, Alice Kyteler, was the beautiful daughter of a wealthy Flemish immigrant. She had the unfortunate luck of surviving four husbands, each of whom increased her wealth with their respective deaths. She was arrested and tried in connection to this, but eventually allowed to disappear, certainly minus some of her fortune. Her maid however, Petronilla de Midia, was the one who confessed and incriminated her mistress.

She admitted to such outlandish things as making spells from rooster intestines and hair plucked from a bottom, which earned her the privilege of being the first person burnt at the stake for heresy in Ireland, on November 3, 1324. We don’t get to hear her side of the story, but Petronilla couldn’t have been much of a witch to end up like that.

The good witch, or wise woman, tradition follows a positive theme but does not really have much of a costume. This type is exemplified by Biddy Early of Ennis, Co. Clare. Biddy was born in 1798 and orphaned at an early age. She also survived four husbands. She differed from Alice in that she was not made wealthier by her husbands’ untimely ends.

Biddy was also distinguished because she had developed a reputation as a healer. Her early life misfortunes would mark her as having that potential in Irish tradition. Biddy and her practice were in frequent conflict with local authorities during her life, but she must have done a great deal of good for people because by the time of her death, she was regarded as a local hero.

Sadder witch stories follow a similar theme. Women who were outcasts and had the bad luck of being too close to a disaster of some sort. They committed the sin of being in proximity when things went wrong for some community member. A woman was heard to mutter something days before someone died in the house she passed by, it must have been a curse from her that was responsible.

One story from Antrim in 1710 paralleled the Salem witch trials. Eight women were tried for causing the demonic possession of a teenage girl, causing this one in particular to have fits, throw Bibles and vomit nails. Explains a lot.

The last “witch” killed in the American colonies had her fate sealed when she drew the attention of the hot-blooded evangelical extremist Cotton Mather. Ann Glover was an immigrant whose family was forced to leave Ireland by yet another celebrated gentleman, Oliver Cromwell. The family was split up and she landed in Massachusetts.

Ann had the position of caring for a family. When the children became seriously ill, it was decided that nothing outside of demonic influence could have brought on the illness. Ann was a woman who was guilty of being old, Catholic and an Irish speaker, which she spoke exclusively during her trial. It would be hard to think of a worse combination in the eyes of that crowd.

It is kind of strange to now see these legends as part of Halloween. They are more sad than scary, for what seems to have survived is the demonized version of more tragic tales. The thing about all of these stories is that even though I am telling them in a more reasonable manner than they were told in their own time, the people in question still have no voice.

We don’t know their side of things. They were, except for Biddy, alone and disliked. Arthur Miller wrote The Cruciblein the 1950s about the Salem witch trials, to remind us to allow our calmer, cooler and more compassionate natures to lead us and not let our judgement fall like autumn leaves on our modern witches.

Please forward Akron area events to me to share with all our readers! 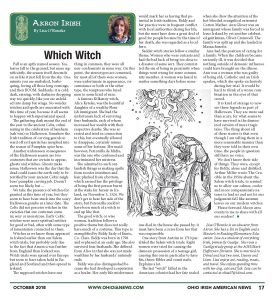 *Lisa O’Rourke is an educator from Akron. She has a BA in English and a Master’s in Reading/Elementary Education. Lisa is a student of everything Irish, primarily Gaeilge . She runs a Gaeilge study group at the AOH/Mark Heffernan Division. She is married to Dónaland has two sons, Danny and Liam. Lisa enjoys art, reading, music, and travel. She enjoys spending time with her dog, cats and fish. Lisa can be contacted at olisa07@icloud.com.