Summer ends and Fall quickly turns to winter in Ireland.  We don’t have much of a Fall season in the Emerald Isle.  This is probably due to our geographic location, temperate climate and the abundance of ever green trees.  It is a wet, windy, cold season with shadows of gloom and darkness that dampen the day and obscure the picturesque landscape.

My memories of Fall are wrought with the misery of getting up in the pitch black mornings, walking to school in lousy weather, with dawn breaking in the horizon and dusk upon us in the evening walk home.   The drudgery of daily living was relieved by the mid-term break.  A week free from school and academic responsibilities found us lounging in debauchery, culminating in the Hallowe’en holiday.

This pagan tradition oddly enough originated in Catholic Ireland and the British Isles, and arrived in America with Irish immigration in the late 19thCentury.  There itburst forth into a considerable and lucrative national holiday. It has since become a billion-dollar industry for candy and costumes sales.

History teaches us that the October 31 Holiday is based largely on the Celtic pagan feast of Samhain(the new year).  Hallowe’en marks the end of the Celtic Calendar, a night where the veil separating our world from that of ghosts, is at its thinnest, thus allowing strange creatures with supernatural powers to wander the earth.

Celebrated for centuries by the Celts, this enchanting night is aroused with crackling bonfires and assorted sweets to appease the dead.  The original jack-o-lanterns were carved from turnips and lit with burning lumps of coal. They were placed outside homes to welcome the deceased loves ones and also offered protection from malevolent spirits.  What a job is must have been to carve those indestructible root vegetables!

With the arrival of Christianity to the Isles and to ensure conversion, Samhainwas merged into the new Faith with November 1 celebrating All Souls’ Day.  Immersed in the superstitious and mysterious other world, a reality described as “the fantastic,” the holiday is further celebrated with the creation of horror, fantasy and science fiction writings and movies.

According to Regina Hansen, we are fascinated by monsters and the unknown because “it’s a way to experience the supernatural without having to believe in it.  Stephen King once said that horror is a way to face death.  It’s an existential thrill, a way to laugh at death and be fine afterwards.” I have experienced the likes at haunted houses, never mind the cinema!

Fond childhood memories remind me of the respite Hallowe’en bestowed on us. Mam’s freshly made hot potato pancakes slid from the greased frying pan onto our welcoming breakfast plates.  Butter knives clanked as we fought to get globs of butter to slather on them.  Waiting for the glaze to melt, cups of tea were poured and the kettle was set to boil again for refills.

Lunch appetites were whetted by the colcannon warming on the stove top –  mashed potatoes intertwined with fried cabbage and green onion, flecked with parsley and moistened with cream – was eagerly consumed.  Hallowe’en was a family celebration, and we stayed home for the evening.  My mother used to bake a báirín breac, (barm brack), which literally translates to speckled loaf.

It’s essentially a light fruit cake with sultanas and raisins and candied peel.  Fortune-telling and witchery are stirred into the yeast batter with a coin and a ring kneaded into the bread.  Devouring the bread was done so carefully to avoid smashing a tooth on the silver. Whoever got the slice with the ring would supposedly get married first, and whoever got the coin would become the wealthiest in the family.  None of us wanted the ring.  We all wanted the coin.

The harvest was incorporated into the tradition.  Bowls of fruits and in-the-shell nuts adorned the kitchen counters and the aroma of baking apple tarts sprinkled with cloves was delectable.  Apples were placed in a basin the sink, and we took turns trying to bite chunks out of them with our hands behind our backs.  This was not as easy task.  Whoever managed to successfully consume the most out of the apple got a prize.

My Cleveland abode has different Hallowe’en traditions.  We don’t carve turnips, or dunk for apples.  My friends from the Philippines come to our house every Hallowe’en with their daughter.  She and my kids trick or treat, and we enjoy a hot Shepherd’s Pie upon their return that warms cold fingers and frosty noses.  The kids spill out the candies in front of a glowing fireplace and a somewhat friendly exchange ensues.

I’m lucky if I get a Reese’s, but my hot port is all I need to consume.  A friendly neighbor tries to scare the daylights out of us by banging on our French doors donning a scary mask.  We quickly forgive him and have good craic as we share our Middleton to calm the nerves and enjoy the laugh.  Evolving traditions at home abroad.
Sources:  Regina Hansen, Ph.D. Boston University College of General Studies.
Deseret News – Amy Laskowski, 10/31/2013 bbc.co.uk 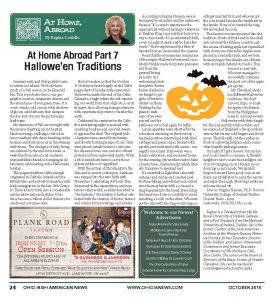 *Regina is a Graduate from the National University of Ireland, Galway and a Post Graduate from the National University of Ireland, Dublin.  She is the former Curator of the Irish American  Archives at the Western Reserve Historical Society, former Executive Director of the Soldiers’ and Sailors’ Monument Commission and former Executive Coordinator of the Northern Ohio Rose Centre.  She serves on the Board of Directors of the Mayo Society of Greater Cleveland.  She can be reached at rcostello@ameritech.net

Editor’s Corner: On a Roll

Discussion of Irish Language Act at Stormont in N Ireland