Always there would be stories of lights

Hovering among bushes or at the foot

of a meadow; maybe a goat with cold horns

pluming into the moon:

a tingle of chains

As the heart of autumn eclipses the last vestiges of summer light, night comes early and winds chime with the approaching ghosts of winter.  Brown leaves scuttle along cold pavement and moonlight casts eerie shadows upon that which looks so familiar in the light of day. It is easy to imagine how the rational part of our mind is held sway by fear and superstition.  How does one distinguish between that which is fact or fiction?

There is a well-known legend among the natives of Achill Island, County Mayo, Ireland involving Brian Rua Uí Cearbháin. During the 1600s, Brian Rua Uí Cearbháin prophesized that “carriages on iron wheel, blowing smoke and fire, which on their first and last journeys would carry corpses” to Achill Island. As a bridge from the mainland to Achill was non-existent at that point in history and railways were yet to be discovered, Rua Uí Cearbháin’s words would have been cryptic to the old widow with whom he shared his vision.

Were his ramblings the stuff of legend or a true prophecy? Almost three hundred years later, his words became reality.

Achill Island is a picturesque land where tiny villages dot vast mountains that sweep down to rugged seas. In 1893, the Midland and Great Western Railway began construction to link the last section of the railroad from the east of Ireland to Achill Sound.

The official opening of the final railroad link between Mulranny and Achill opened on May 13, 1895. However, the first train to run on that passage was a year earlier, June 16, 1894 when 30 of 32 bodies of victims drowned in the Clew Bay Disaster were brought home to Achill Island to be buried in Cill Damhnait, Kildavnet Cemetery.

During the daylight hours of June 14, 1894, a group of young Achill workers were on board a hooker boat, The Victory, to connect with the larger freightliner, the SS Elm, which was to bring them to future employment in Scotland.

One poignant first hand account documents the reflections of survivor young Eibhlin, who with her brother Sean was embarking on a journey to join her brother Micheal and sister Niamh in America. These siblings were among the many young Achill villagers who were starting on a new chapter in their lives, a chapter abbreviated by tragedy.

As The Victory wove between the Clew Bay Islands, the group of young people aboard became excited when they first glimpsed the mighty SS Elm. They rushed to the starboard side of the boat to obtain a better view of the steam liner and the Westport Harbor beyond. The hooker could not handle the weight and soon capsized, drowning 32 passengers in its wake. Young Eibhlin survived, but she was never to see her brother Sean again.

Now on board a carriage of steel and fire, the bodies were taken back to Achill for burial. The Mayo News described the scene along the railroad passage: “A mighty steam hearse moving quietly along through mountain and bogland” as “the hills became black with people who kneel and pray as the train comes into sight.” After nearly three hundred years, the people of Achill bore witness to the first foretelling of the prophecy according to Brian Rua Uí Cearbháin. Forty-three years later, the prophecy would be completed.

In September of 1937, a group of young Achill villagers, aged 13-16, were taking part in seasonal “tattie hoking,” or potato picking, among the farms in Kirkintilloch, Scotland. At night, the young lady workers would sleep in cottages while the young men, often brothers of the girls, would sleep in the bothy or cow byre.  It was not uncommon for the lads to be padlocked into their sleeping quarters “to keep them away from the village girls.” Tragically, this practice led to death.

A fire started in the Kirkintilloch bothy. The sisters of the boys heard screams as smoke and flames leapt from the barn.

Amid the hysterical cries of the girls and the chaos of a night engulfed in fire, Scottish foreman John Mackie and Irish supervisor, Thomas Duggan fought to rescue the boys, only to find the bothy had been padlocked. By then, it was too late. Ten young boys from Achill Island perished that night.

Originally, the boys were to be buried in hastily supplied coffins in a cemetery near Kirkintilloch, but the grieving villagers of Achill sent a telegram stating, ”Beir Abhaile ar marbh” – “Bring home our dead.”  With this second tragedy, the 17thcentury prophecy of Brian Rua Uí Cearbháin was fulfilled. The first and last journey of the iron carriage brought devastation and sorrow to all the inhabitants of Achill Island. Two weeks after this final journey, the Achill rail line closed on September 30, 1937.

Is the legend of Brian Rua Uí Cearbháin coincidental history or the manifestation of a true prophet? Seekers of tales and local historians may never be able to separate fact from fiction in this dark time of Achill history, but the truth remains that the lives of many young Achill natives were lost before their dreams even began. 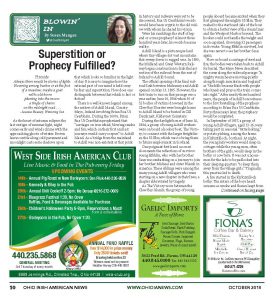 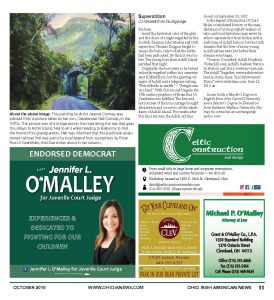