This column has discussed 1880 in Cleveland in previous months.  Irish immigration increased in the early 1880s, and Cleveland was a booming. Downtown in the 2ndWard, Irish women dominated the census in places like the Kennard House.  Education and economic opportunities increased for second generation Irish American women as well.

Last month we looked at the Irish influence in the public schools. New public and private spatial relationships were a result of this demographic shift ,as Irish women began to negotiate and maximize these new constructions, albeit not without friction and attack.

The Land League united Cleveland and brought Parnell to town.  His visit bore bare the bias of a Protestant city council and the strength of a united Cleveland Irish community.  After that visit, the Ladies’ Land League in Cleveland were considered a contentious liberation organization by some, including the Scottish Bishop Gilmour.
The Irish American Archives Society has an excellent page on its website entitled “Cleveland Women and Irish Nationalism,” which has background on this missionary mêlée and Mary Rowland, its president.  This is Bishop Gilmour’s final public statement.

“In answer to my grave and severe criticism of last week on the formation of the Ladies’ Branch of the Parnell Land League of Cleveland, the ‘Presidentess’ thereof last Sunday informs her audience and the public that they must ‘away with such dictation’ as their Bishop gave them when he told them ‘the noisy political arena was no place for a women.’ In the same hall and by one of the men who are pushing forward these silly women, it was said at the same meeting, ‘if they were to be ruled by the Scotch or Italian or English priests we had better shut down the whole lot.’

“Another addressed his Bishop as ‘Gilmour’ and the tone of all the addresses is so flagrantly disrespectful of the Bishop and priest that it become necessary to speak in terms that will leave no misunderstanding.  So long as this Parnell branch of the Land League confined itself to the simple discussion of the Irish question I passed them in comparative silence, as I am strongly in sympathy with the cause of Ireland and have ever spoken in clear terms upon the question both in Cleveland and elsewhere, when time and place presented an opportunity.

“No man has ever spoken stronger words than I on the wrongs of Ireland, as seen in my late lecture on the Land League.  I resented, and today resent, the imputation and the charge so industriously made by the men of this Parnell branch of the Land League that because I refused to advocate the no-rent policy so lately in vogue that therefore I am the enemy of Ireland.

“I reject such charge as simply untrue. So long as this Land League Society has confined itself to a male membership, they and I have probably had but a difference of opinion as to the means to help the cause of Ireland.  They had their views.  I had mine, and we were free to differ, and as men act it out as men.

“But when they bring women into the political arena, and will attempt to unsex the women of my flock; to make them brawling politicians, and under the plea of patriotism attempt to destroy female modesty and so bring shame on every Catholic woman of Cleveland, then it is time to speak, and to speak in words that will end dispute.  When the question is squarely raised on choosing between female modesty and pretended patriotism, then I place myself on the side of female modesty; and when it comes to defending the female modesty of my flock as against the brazen unwomanliness of female politicians, I accept the gauge and will see that no Catholic women within my diocese shall turn herself into a brawling politician.

“If there are women in Cleveland who will turn themselves into brawling politicians, then they shall not be Catholic women, and, if heretofore they have so called themselves, then the public shall know they are so no longer.  No women within the diocese of Cleveland shall at the same time be a Catholic and a brawling politician.  The Catholic woman must live within the modesty of the home; she must be the ornament of the family circle and her womanly delicacy and gentle nature shall not be tainted with the noisy brawl of the virago.

“Woman must be women.  Women shall not be permitted to unsex themselves and at the same time within the limits of the diocese of Cleveland remain members of the Catholic Church.  Now therefore, I, Richard Gilmour, by the grace of God and the appointment of the Apostolic See Bishop of Cleveland, hereby and by the presents excommunicate and declare excommunicated, ipso facto, and within the limits of the diocese of Cleveland cut off from the communion of the Catholic Church any woman now a member of the Parnell Branch of the Ladies’ Land League, of Cleveland, who shall attend any meeting of the said Ladies’ Land League, in what is known as the Parnell Hall, Cleveland, or in other hall, whether such meeting be held next Sunday afternoon, or hereafter, at any other time or place.

“I further declare excommunicated, ipso facto, and within the limit of the diocese of Cleveland cut off from the communion of the Catholic Church, any woman or women who shall join the said Ladies’ Land League.  Female modesty must be maintained let the cost be what it may. No Catholic woman shall be permitted to forget her womanhood; or, if she does, she shall, within the diocese of Cleveland, cease to be in communion with the Catholic Church.  We hereby direct that next Sunday, fourth inst., this letter shall be read at all masses in all the English-speaking churches of the city of Cleveland, and we also direct pastors to warn the women of their respective congregations against joining the above Ladies’ Land League or in any manner countenancing any movement with will tend to taint or lessen among us Catholic female modesty.  Given under my hand and seal at my episcopal residence, Cleveland, this 1stday of June, 1882.” Plain Dealer, June 3rd, 1882.”

These words I attempted and failed at analytically regurgitating like a good historian.  This “Bishop’s Bull” was written on Thursday, published on Saturday and read at mass on Sunday, “Tomorrow and Tomorrow and Tomorrow.” That is not a lot of time re-sex yourself no matter your modesty.  The excommunication did not silence Mary Rowland and the Ladies’ Land League in Cleveland, even if it meant sacrificing everything. 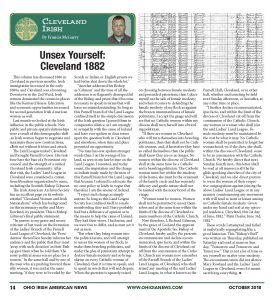 Got My Whishy: Cleveland Irish