One wake too many has left me feeling the unstoppable passage of time. I won’t do disservice to one lost friend by talking too much of another. Each hurt. Each has memories that have left me restless for one last conversation on one hand, and the easing of the decades of pain when I go to join them, on the other.

We are a nostalgic lot, though I suspect it is lessening with each generation removed from Erin’s green shores – more focused on looking forward, rather than back. It is as it should be. We look to where we are going, not where we have been. Still, I encourage you to have that conversation with them, before you can no longer, and can only wish for it.

Within, Halloween is on the kids minds – learn how the tradition merged with Samhain in Ireland as the ancient pagan ways and days and the emerging catholic ones evolved. There are so many great concerts tours and more in October ~ check them out in the Out & About Ohio section, on pages 22-23. Have you tried Sully’s Angry Leprechaun Burger? The recipe is inside, bring a chaser. Profiles, reviews, jokes and special features abound; I hope you enjoy the issue.

We are off to the INUSA National Convention this month, this year in New Orleans.  I am looking forward to seeing old friends, and moving the Irish in America, forward.  We’ll have a story and a pic or 3 for you next month.

(Until next month, goodbye)

“Follow me where I go, what I do and who I know;

Congratulations to Casey’s Irish Imports, celebrating THIRTY years of gifts and commemorating our weddings, baptisms, and rich heritage connecting us all, to Ireland.

Congratulations to Great Lakes Pipe Band, who took first at the 153rd Highland Gathering & Games in Pleasonton, CA over the Labor Day weekend. The event is one of the largest gatherings in the world. 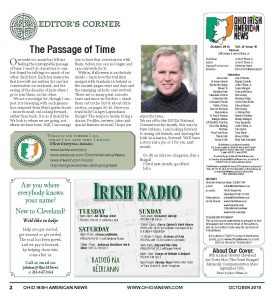 Out & About Ohio Music & Events April