To paraphrase a recently re-departed small forward of some renown, for many Irish Americans, particularly first generation Irish Americans, life experience has proven that nothing is given, everything is earned.

For Walter P. O’Malley, father of current Cuyahoga County Prosecutor Michael C. O’Malley, himself son of Walter O’Malley of Corraun, County Mayo, everything was earned. Like many of his, the greatest, generation, O’Malley quit school early to join the service in 1942, soon after Pearl Harbor (in patriotic zeal, he may have overestimated his age to do so, perhaps by improving his birth certificate).

He returned to Greater Cleveland afterward, settled in Brooklyn, where he and his wife raised 11 children. Mike is the 11th. “The first batch attended Catholic High School,” Mike remembers, “but we later additions attended Brooklyn High.”

All of the O’Malleys attended St. Thomas More elementary and were formed, spiritually and academically by the Sisters of The Incarnate Word. Mike recalls them as, “Nice but no-nonsense—they were top notch. They instilled love for the Lord but also the need to do homework.” Michael later attended Kent State University, and earned his law degree from Cleveland-Marshall.

Of his upbringing. Mike remembers the sacrifices made by parents to feed, clothe and educate 11 young souls on the income that a job in the trades then provided. His Dad recognized that the key to success in the larger community was through education and hard work; his fondest hope that his offspring would all surpass him in their various life endeavors.

Michael was not the first Irish American lawyer to begin his career in the courthouse. He was hired as personal bailiff for the late and legendary jurist, Eddie Corrigan of the Cleveland Municipal Court, who earned some contemporary media attention but who was renown by lawyers who knew him for his legal mind. He later became a Probation Officer for the City of Cleveland, and, after a brief time in private practice, Mike first ran for public office for a City Council seat in what was then Cleveland Ward 16, the Old Brooklyn area.

Mike O’Malley was hired as an assistant County Prosecutor and rose to the position of First Assistant under Bill Mason. In this capacity, he supervised the prosecutions of some of the larger, high profile criminal enterprises and homicide cases in the recent Cuyahoga County history. After serving as Safety Director for Parma, Mike won election for County Prosecutor in 2016.

Among his goals is to rehabilitate low-level drug offenders so as to reintegrate them into society without the stigma of a felony conviction. He recently noted the amount of crime in our community by drug users, a problem best remedied by treatment and recovery. While O’Malley is supportive of the highly successful Drug Court run by the Common Pleas Court, he believes the criteria for entry should be more inclusive.

Mike has two sons, Shane and Evan, both St. Ignatius graduates, classes of 2014 and 2016, respectively.

The office of County prosecutor and its view of its mission has evolved rapidly in recent history—the public and the media’s reaction to high profile police shootings, the advent of the Drug Court, perceptions of racial imbalance in prosecutions as well as the decline in the number of indictments have combined to effect changes in the way cases are brought to the grand jury, and in O’Malley’s case a desire to reach out to local and neighborhood communities.

There seems to be a growing perception, too, that merely being “tough on crime”—incarcerating low level, non-violent offenders to State prison—does little to prevent recidivism and perhaps worsens the crime problem.

O’Malley seems to understand this changed landscape. Not everyone outside the justice system appreciates the vast effect the office has on the greater community, on crime, punishment and policy.

Mike O’Malley and his many siblings were infused with the work ethic that is common to first generation Irish Americans, the knowledge that in American society, attainment is earned, not given. 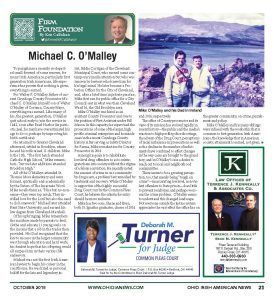