Michael Malachy O’Sullivan was born at Foilmore, Caherciveen, County Kerry, Ireland, on March 17, 1854. Little is known about his early life in Kerry, but, at some point, his family relocated to County Galway.  He graduated from the National School in Galway at the age of fourteen. He later became a teacher and then principal at the same school.

One source states that O’Sullivan was fired as principal at the National School due to his political activities, notably, his membership in the Irish Republican Brotherhood (the Fenians).  Another source states that he resigned the position to pursue the study of law and the sciences at Trinity College, Dublin.

In either case, what we know is that he was a member of the Irish Republican Brotherhood in County Galway and he did leave his principal’s post to attend Trinity College. After graduation, he was hired as a professor of science and the junior classics at St. Michael’s Seminary in Ballinasloe, County Galway.

At this time in Ireland, the oppression of the poor tenant farmers was at its height, particularly in the west of Ireland.  Most of the Irish poor lived on land leased from a landlord.  Being “tenants at will” the Irish faced eviction for non-payment of rent or merely because the landlord wished them gone.

The system produced less and less food to both pay the rent and feed the tenant’s families.  By 1879, the land system had brought famine to parts of Ireland. Those, like O’Sullivan, who took up the cause of land reform, insisted that only land ownership by the Irish would resolve the problems and they began a program of organized land agitation directed at the landlords and the reduction or rents.

In May 1876, the first Tenants Defense Association in the west of Ireland was founded at Ballinasloe, County Galway, by Mathew Harris and Michael O’Sullivan.  Harris was also a Fenian and a member of the Supreme Council of the IRB.  O’Sullivan was named Secretary of the TDA.

The organization urged tenants to renegotiate fair rents with landlords and, if necessary, to withhold rents.  While promoting non-violent solutions to land reform, their rhetoric often came very close to advocating violence.

In addition to retaining his professor position at the seminary, O’Sullivan was also editor of the Western News, “fighting nobly to alleviate the almost incomparable sufferings of his country-men.” Through the diligence of Harris and O’Sullivan, the Tenants Defense Association became a model for other tenant rights movements.

A County Mayo man, Michael Davitt, was released from prison in December 1877 after serving seven years for arms smuggling.  Upon his release, Davitt disavowed the violence of the Fenian movement and adopted the belief that Irish land reform could only be achieved by working through non-violent means.He established a land organization in County Mayo and began discussions with James Daly, also from County Mayo, as well as, Matthew Harris and Michael O’Sullivan of Galway.

Davitt’s discussions led to the first“monster meeting” that was held in Irishtown, County Mayo on April 20, 1879, with an estimated turnout of 15,000 to 20,000 people. O’Sullivan was the most effective speaker at that meeting.
He told the crowd, “If the landlords who are now demanding exorbitant rents do not lower them to meet the requirements of the times and the altered circumstances of the tenant farmers, let the tenant farmers themselves meet together, and consult together, and settle among themselves what would be fair, equitable rent, and if that is not accepted by the landlord – why, let them pay none at all” (followed by cheering from the crowd and cries of “None at all!”).

The success of the Irishtown meeting led Davitt to consider consolidating the work of the various regional land organizations into one national organization. On October 21, 1879, the Irish National Land League was founded.
At the first meeting, Member of Parliament Charles Stewart Parnell was elected president of the League.  Michael O’Sullivan was elected Assistant Secretary.  It was said of the Land League that, “The fire they kindled spread into a blaze which inflamed all Ireland.” O’Sullivan became one of the National Land League’s most aggressive and influential members, he travelled throughout Ireland denouncing British brutality and landlord greed.  His activities and that of the League soon attracted the attention of the British.

The government took action in November 1880, when 14 members of the National Land League were arrested and charged with four counts of conspiracy against the country’s landlords, including “conspiracy to excite discontent and disaffection among the Queen’s subjects.” Of the fourteen members arrested, five, including Parnell, were Members of Parliament; nine of those arrested, including Michael O’Sullivan, were either officers or members of the Land League.

The show trial, held at the Four Courts in Dublin, began on December 28, 1880 and ended on January 25, 1881.  The defendants were released because the jury was unable to decide on their guilt.  One result of the month-long legal effort was the popularity of Parnell and the Land League increased.  It also caused the passage of the 1881 Coercion Act by Parliament, which empowered the government to arrest and imprison, without trial any person “reasonably suspected” of treasonable practices or agrarian offences.

After the passage of the Coercion Act, Michael O’Sullivan decided to immigrate to the United States. Coming to America, he lectured on Irish land reform in various cities, and settled in Colchester, Connecticut, where he obtained employment. He spent his evenings in the study of law.  He secured a state certificate to teach in Connecticut and accepted the position of principal of the Poquonock School in Windsor, Connecticut, which he held for three years.

O’Sullivan successfully passed the law examination and was admitted to the Connecticut bar in New London on September 28, 1886. He then began the private practice of law in Windsor, and was elected Justice of the Peace for that town.

O’Sullivan then decided to follow a different path in his vocation and become a Catholic priest. He joined the Order of Preachers (the Dominicans) at St. Rose Priory in Springfield, Kentucky.  He was professed on the feast of St. Dominic, 1890 and was sent to the Dominican House of Studies in Somerset, Perry County, Ohio for his theological training.  O’Sullivan was ordained by Bishop John Ambrose Watterson at St. Joseph Cathedral in Columbus, Ohio on January 25, 1894. He took the religious name Paul and became Father Michael Paul O’Sullivan, O.P.

Following his ordination he was first sent as a missionary to the northwest. He served in parishes in Montana, Illinois, Iowa, Wisconsin and Minnesota.  In 1914 he was assigned as a professor at the Dominican House of Studies in Somerset, Ohio where he served until his death on June 8, 1920.  He is buried in the Dominican plot at St. Joseph’s Cemetery in Somerset. It was written regarding Father O’Sullivan, “He was zealous, eloquent and possessed of a rare mind; he accomplished much good in the various places where he labored.” 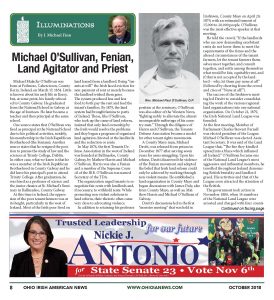 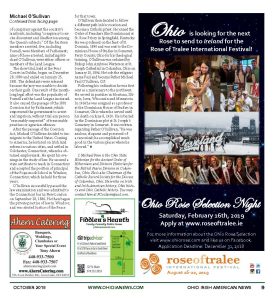 A New Year, A New Cover, an Auld Tradition