“Walk in the footsteps of sinners and saints,” so invites the excellent promotional video filmed on Cork’s Spike Island. This striking, verdant island contains a star-shaped fort possessing what once was the largest prison in the world.  It could hold up to 2300 inmates.  Sinners and saints.  Or both?

People, hurting, decent and ugly all at once? People who tried, failed and paid a heavy price.  Only, today, we accept nothing less than perfection from those who went before. Any ill-judgement, great or small, practically disqualifies them from the human race. Blessed is he who expects nothing, and remember – you only analyse the wrong done, not the good.

These dark and forbidding prison buildings are in appearance and intent certainly equal to the notorious Kilmainham Prison in Dublin. In fact, hesitantly entering one of the fort’s oppressive, black-as-night corridors of cells, I found myself pleased that I was now standing in a prison notKilmainham, which held no troublesome memories for me.

However prisons, especially ancient ones, are meant to border on the brutal and their existence is to punish? To reform? The usual suspects show up in Spike Island’s prison fort, which finally closed its doors forever in 2004: Famine victims, 19thcentury inmates to be transported to the outer ends of the world for both paltry and dreadful crimes, 20thcentury young people found guilty of ‘allowing themselves to be carried in a stolen vehicle’, thieves and felons.

This prison’s history, like that of Ireland, is principally the history of the poor. The fort standing today replaced two previous ones; work on it commenced in 1804 and was completed around 1850.

The fort, formerly Fort Westmoreland, was ‘home’ to many prisoners. I visited because of one: John Mitchel. An outstanding, fiercely acerbic and exceptional political journalist, a man hovering, perhaps, on the brink of sanity during the years of the Great Hunger; a racist. Cripplingly difficult to type that last word.

He arrived on the island in chains as May of 1848 faded and was removed from both Spike Island and Ireland on June first, a time period so short it hardly seems worth mentioning. Here, though, first appeared the seeds of his Jail Journal, his deeply personal recollections of what he might be expected to endure as he stood on the threshold of his sentence of transportation.

He was the first person to be tried by the British under the newly passed Treason Felony Act of 1848 and was convicted by a jury of none of his peers.  Leading to his conviction were his searing, antagonising, and wrathful articles, appearing initially in the famous Young Ireland newspaper, The Nation, and afterwards in his own paper, The United Irishman.

These articles raged against the reckless neglect by, and harsh laws of, the British Government in Ireland. They represent Mitchel’s urgent attempts to highlight the plight of nameless hungry Famine souls desperately seeking food.

In the years that followed, two other forts far across the Atlantic wrought further distressing damage on Mitchel’s life. He succeeded in escaping from Van Diemen’s Land (present day Tasmania) and started a new life in America, where he threw in his lot with the slaveholding South.

Towards the end of the American civil war, in July 1864, his eldest son John, then a captain in the Confederate army, was mortally wounded defending Fort Sumter in South Carolina from Abraham Lincoln’s Union army.
Mere months after that civil war ended, Mitchel returned to New York, where he persisted in publishing his views regarding the Confederacy. Such was the exasperation of the Northern people that Ulysses S. Grant arranged for his arrest warrant for aiding the Southern rebellion.

Mitchel was imprisoned without trial for slightly over four months in Fort Monroe, Virginia, in a casemate cell next to Confederate President Jefferson Davis. The conditions under which Mitchel was held were so severe that he never fully recovered.

May 27, 1848 – On this day, about four o’clock in the afternoon, I, John Mitchel, was kidnapped, and carried off from Dublin, in chains, as a convicted “Felon.” Thus commenced Jail Journal.

“I stand before you today as a thief and a robber.  I stole this head, these limbs, this body from my master and ran off with them.”  Thus began several speeches made by the famous Maryland abolitionist and ex-slave Frederick Douglass.

I have read these two quotes often on entirely separate occasions, but for me they are ever entwined. Sacrilege? In history you should never play the “what-if” game.

But I can still wish that John Mitchel might have had even a single day’s encounter with Frederick Douglass.  Would the keen intelligence and sheer humanity of the illustrious agitator have changed the innately honest Mitchel’s now warped view of the world? Did Mitchel’s tired and tragic reasoning matter? How could he love one section of humanity to the point of self-destruction, yet view others elsewhere with mean and casual prejudice?

These thoughts played on my mind as I sat staring out at the sparkling sea on Spike Island this summer past.  The island fortress fully deserves every modern accolade won.  A fifteen-minute ferry trip takes you from Cobh, giving you three hours to spend on the island with the option of joining a guided tour.

Time flies past and you’ll find yourself planning a fresh trip so you can also visit the prisoners’ graveyard, or the houses of former employees scattered on the island, in addition to studying the various strands of stories about Spike and further artefacts on display.  Then, as your return ferry approaches Cobh, you might glance backwards and catch sight of the Irish tricolour flying high above the entrance to the fort.

Fort Westmoreland was renamed Fort Mitchel in 1961, honouring the impassioned Young Ireland journalist. Another member of Young Ireland, Thomas F. Meagher returned in 1848 from revolutionary France having been presented with a silk-embroidered green, white and orange flag by the women of Paris. In Dublin,
John Mitchel told his friend Meagher: “I hope to see that flag waving one day as our national banner.” 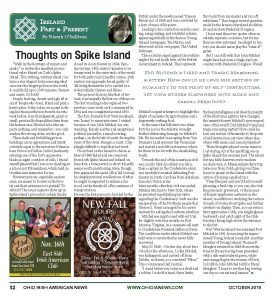 Off the Shelf Book Review: The Pull of the Stars by Emma Donaghue / On This Day in Irish History