The Great Lakes Pipe Band placed first at the 153rd Highland Gathering & Games in Pleasonton, CA over the Labor Day weekend. The event, sponsored by the Caledonian Club of San Francisco, is one of the largest gatherings in the world. 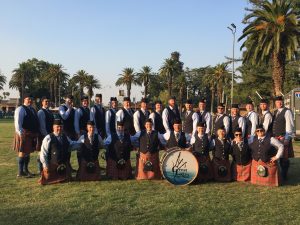 Final placings for the weekend were determined by the combined results of the march, strathspey & reel and medley events, where Great Lakes PB first and third respectively. Final Grade 2 results, the highest grade offered, were:

The Caledonian Club of San Francisco’s Highland Gathering and Games are the largest in the U.S. and, in some years, the largest in the world. It is not unusual to have more than 30 pipe bands at the event, plus hundreds of athletes, dancers and other participants.
The Caledonian Club of San Francisco was founded in 1866, a year after the end of the Civil War, and its inaugural Highland Gathering and Games, a family picnic with athletic contests, was held in a field at 12thand Market Streets in San Francisco on Thanksgiving Day 1866.

The San Francisco earthquake of 1906 could not stop the Highland Games from going on, nor could two world wars or a Depression. The early Games were held in Petaluma, north of the Golden Gate Bridge, after World War II, before moving to Santa Rosa, in Sonoma County. In 1994, the Games moved again, to the Alameda County Fairgrounds in Pleasanton, where they have been ever since. Current attendance at the Games is estimated at over 50,000 people during the two days of the event.

On August 20, 2010, our son Quinn was diagnosed with a large benign brain tumor. He underwent surgery to remove it and endured several weeks of inpatient therapy to return home and go to school. He continued to get stronger. Quinn’s motivations to reach his goals were prizes he could pick out of the treasure box, often times the box was very low or empty. 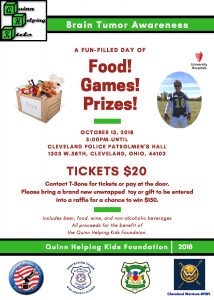 We founded, Quinn Helping Kids to try and sure that the treasure box has plenty of choices of toys for all kids undergoing treatment. We want to bring a smile to the faces of each child receiving treatment to help brighten their day. Monies raised are given directly to the hospital for distribution to needy families and will also go towards the purchase of gifts and gas cards for the older children and their families to help out in their daily expenses.

Our first fundraiser was held in December of 2012. We were able to raise $1200.00 for the purchase of gas cards, gift cards for families traveling from out of town to the Cleveland area for their child’s treatment, We also collected over seven hundred items like toys, hats, scarf’s, socks , stuffed animals and 200 books for the children.

After witnessing the overwhelming support and generosity from the family and friends of Quinn, The Quinn Helping Kids committee, along with The Cleveland Police Patrolmen’s Association decided to reach out to the community for their support in helping children smile everyday even though at times it can be difficult.

Quinn understands with your support and generosity their will be many bright smiles. Thank you for helping us, to help the ones who need our help the most, our kids.

Out & About Ohio January Music & Events