Off the Shelf: THE CAMBRIDGE HISTORY of IRELAND- Four Volumes

This is a mammoth four-volume history of Ireland from 600 AD to the present. One hundred historians, working in thirty-eight institutions, along with the editors, have produced a magisterial work that contains, in the tradition of historians collectively producing works in their areas of expertise, and in the process rivaling The New Historyof Ireland, published between 1976 and 2006, with nine volumes. This project took only four years to complete.

In Volume I, 600-1550, political, artistic, religious, social and economic aspects of the medieval period are delineated. The first English conquerors arrived by invitation in 1166 when the exiled King of Leinster, Diarmait MacMurchada, approached King Henry II for help in regaining his kingdom. There is an abundance of sources for the 14thand 15thcenturies as Ireland became more thoroughly integrated into larger worlds.

Volume II, 1550-1730, underlines transition. Ireland in the 1550s was seemingly medieval, but was slowly being integrated and involved in global expansionism. Historians have previously estimated population loss during the Cromwellian conquest at between ten to twenty-five per cent. More recent estimates suggest up to thirty percent of Ireland’s population may have perished during the conquest. But the key question of who should govern Ireland and how it’s lands should be divided were answered, the decisive winners being the Protestants.

Volume III, which encompasses the years 1730-1880, had their backdrop in the Napoleonic wars. The twin ideologies of republicanism and unionism emerged. According to one writer, Ian McBride, “no constituent of eighteenth-century society was more dynamic than its Presbyterian population.”

Another writer, Peter Gray, writing on the subject of the Great Famine argues that what happened was not the result of genocidal intent (as some historians have noted), but a mixture of “a providentialist theodicy, a moralist obsession with self-help, a liberal economy and the ascendency of British middle-class pressures for budgetary restraint and transferring the fiscal and moral responsibility for the famine back to the countryside.”

The final volume covers 1880-the present. This volume deals politically with issues of sovereignty and freedom. Emigration looms large in this volume, as does the brutal violence which existed during the “troubles” in Northern Ireland.

Some subjects were omitted, such as should there have been an Irish language chapter, but nonetheless it is a work of inspiring quality and would be a fine addition to anyone’s Irish collection. Unquestionably, it is a TOP SHELF read.

**Terrence J. Kenneally is an attorney and owner of Terrence J. Kenneally & Associates Co. in Rocky River, Ohio. Mr. Kenneally defends insureds and insurance companies in insurance related legal cases throughout the state of Ohio. He received his Masters from John Carroll University in Irish Studies and teaches Irish literature and history at Holy Name High School. Mr. Kenneally is also the President of Holy Name for 2018-19. He may be reached at terry@tjkenneally.com. 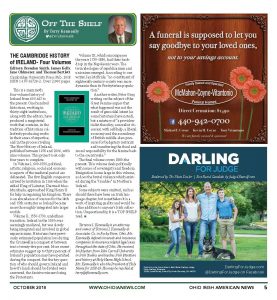 Off the Shelf: The Witches Elm, by Tana French