1 October 1761 – The first major outbreak of violence by “Whiteboys” begins in Tipperary. The Whiteboys were a secret Irish agrarian organization that used violent tactics to defend tenant farmer’s rights.

6 October 1891 – Death of Charles Stewart Parnell, champion of tenant’s rights and co-founder of the Land League.

12 October 1975 – Canonization of Oliver Plunkett, Archbishop of Armagh, the first Irishman to be made a saint since Laurence O’Toole in 1226.

20 October 1870 – Death of composer Michael William Balfe in Dublin. He is best known for his opera The Bohemian Girl. 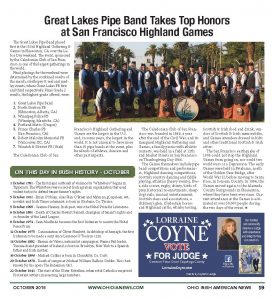 Illuminations: The Promise of Peace

Searching for My Roots: Pilgrimage to Painesville