Every year, I teach G. B. Shaw’s play, Saint Joan, and each year it continues to inspire me.  Shaw, a renowned atheist, takes it upon himself to tell the story of a 15thCentury woman who dares to challenge the male hierarchy.  Not content to be simply a dutiful daughter, Joan rejects the traditional role of wife and mother and becomes a soldier.

For Shaw, Joan’s life is one of genius. She a military strategist, a forerunner of gender equality, and she refuses to be silenced.  Believing herself commissioned by the Almighty, Joan rallies the French army to oust the English from her beloved France.  Her passion is indomitable.

Joan’s fervor cannot be quenched; despite the numerous attempts to alienate her.  Eventually, Joan is betrayed by those she believes she can trust (Church and state).  Shaw’s Joan is formidable.  She is a threat to male supremacy and as such must pay for it with her life.

Writing at a time (1920) when women were sacrificing themselves for the right to vote, Shaw demonstrates that the spirit of Joan lives on.  In Shaw’s play, Joan’s solitary voice is highlighted by the fact that she is the only woman on stage.  While the men seek to bully, mock, and demean her, their attempts inevitably backfire.

Joan, naively it seems, believes that the important men in her life will support her cause.  But, she is sadly mistaken. To those in power, Joan is a rabble rouser, whose political inexperience and idealism makes her dangerous to the state.  And, her belief that anyone can hear God for themselves puts her at odds with the Church.

In contrast to those in positions of influence, the populace see Joan as sincere.  She is a visionary, who, unlike the men in power, genuinely believes in what she says.  To the ordinary people, she is without guile.

It is inconceivable for us to imagine what Joan faced as a woman in the 15thCentury.  Her biographers, mainly men, tend to romanticize Joan’s life.  Uncomfortable with a female protagonist, they depict her as saintly, beautiful, and otherworldly.

By objectifying and downplaying Joan’s ordinariness they elevate her in a way that detracts from her incredible talents as a leader.  Her skills as a military strategist, bravery on the field, and genius are diluted and written out of her story.  It is not until Shaw recasts her in his famous drama that we see that she is a woman before her time.

Her voice can still be heard in the ‘Me Too’ movement.  For while we continue objectify and demean women, we add fuel to fire that took Joan’s young life and branded her a witch.

To finish, I would like to offer my own homage to the patron saint of gender equality.

Tripping on Jesus, fiery and stoned,

Sputtered into a gaping hole of nothingness,

Mockingly, she laughed at the giant void,

Silence was no friend of hers,

Dwarfing her with reminders

Of absence and stilled voices,

The soul’s vigil began to wane in the gathering darkness

And her ire began to smouldered,

Wandering with the wispy plumes

Wondering, if that was all we left

The faint smell of existence,

Fondling a cross with sweaty palms

She massaged the dead Christ and

Let them strip, whip and expose me on the solid

Tis better than being crucified by

Time, and the predictable agony of multiplying seconds,

She laughed at her confessors,

And, dissatisfied with a world

Full of self-interest and political snakery,

Her perverse sense of fashion, deemed to be

Christ, she even reeked with the odour of neglect,

She had become a smell that lingered a little too long,

Soon, they would pin the tail of her

On her donkey’s ass and expect her to pray,

Another game, another rouse to belittle a

Cross bearers would tempt her

With the smell of burning flesh,

Meat for their fleshy minds,

With their carnivorous egos,

They would try to consume her passion,

And, spit out the grit of her humanity

Into a hollowed piety,

Rats, laid siege to her imagination,

Scurrying across her naked feet,

The dank, cold, cell, closed about her,

There was no escape,

A ghastly smell of the dead and dying

Rose up from the slabs,

The fragrance of the damned

Bound her to them,

A key in the lock,

Forced air from her lungs,

Pushed past each other

As fear, oozed out of each pore,

From her hand, the cross dropped,

Lost to the darkness,

Soon, the fire would lovingly kiss her face,

And, with each rush of flame

The sheer magnitude of her resolve

Would melt and peel away,

Soon to be scorched, her unsteady purpose,

Soon, her body too would become exhaled in a halo of smoke

In the dark soul of the night,

Leaving her spirit to hang on the tree of life,

Watching, as the fiery sprites dance around her 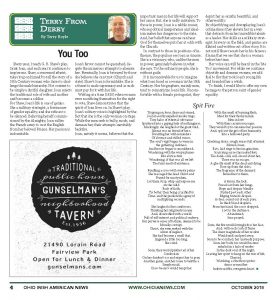 Blessed Are the Meek: Terry from Derry

Terry from Derry: Moving Towards Change

Terry from Derry: Breathe at Last