Never Let your friends down, and never break your word– John P.

I have been asked about the name, John P. Kelly, for the Lucas County AOH division.  I was present at the initial meeting when the name was decided; John P. Kelly had died the year before.  John donated his materials to the Ward M. Canaday Center, University of Toledo Libraries, on July 17, 1985; listed as: JOHN P. KELLY PAPERS, 1937 – 1983    MSS-055

Correspondence is largely incoming. Major correspondents include Congressman, Michael J. Kirwan, Adlai Stevenson, Harry Truman, John F. Kennedy, Robert F. Kennedy, and Hubert Humphrey. Photographs, nearly all of them 8″ x l0″, are news photos of Presidential candidates, portraits of Kelly’s political confreres, informal scenes of fund-raising dinners and the like. There are a number of good photographs of Truman’s 1948 visit to Toledo and of John F. Kennedy’s visits in 1959 and 1960. Notable too is a color photograph of Kelly with Robert F. Kennedy, taken only weeks before the latter’s assassination.

Mr. Kelly was a lifelong resident of Toledo. He attended St. Patrick’s School and the old St. John’s High School and College, leaving his law studies in the latter institution to join the army in World War I.

Kelly’s long political career began in 1916, when he became a stenographer for a neighbor, John O’Dwyer, then the Democratic Party boss. In 1935 he was appointed a County Commissioner to fill the term of the late George W. Lathrop. He ran for election to that office in 1936 as a write-in candidate.

His campaign speeches all ended with the line: “Can everyone here spell Kelly – K-E-Double L-Y.  He not only swamped his Republican opponent, but set a new record for domination of a single precinct.  It was the East Toledo precinct where he won 353 votes out of a total registration of 355. There were five registered Republicans on the polling place staff.

He was elected a City Councilman in 1939 only to resign in 1941 to return to the Board of County Commissioners to fill out the unexpired term of the late Raymond J. Sheahan.  He was defeated in 1943 for the commissioner’s office and he retired briefly to private life.  Kelly was named clerk of the election board in 1944 and elected county Democratic chairman in 1945.

Kelly was among the last of the old time, paternalistic, big city bosses.  He was the one to whom the rank and file Democrats turned to when unemployment occurred, or a child got into a jam or when there wasn’t enough money at Christmastime.  Over the 60 years, Mr. Kelly became Mr. Democrat.

His conversational trademark was “Best year I ever had.”  Kelly was The Democratic state vice chairman for 20 years, refusing a number of opportunities to become state chairman.  He was a member of the Democratic National Committee’s advisory board for 17 years and a democratic ward chairman from 1932 until 1984, when he entered a nursing home.

At Mr. Kelly’s retirement dinner, Judge Robert Franklin described Mr. Kelly as a politician with an outstanding record, a maker of presidents, loved by Republicans and Democrats, a sincere, dedicated American with an active fertile mind, competitive spirit and dynamic leadership.  His achievements and effective service helped build Toledo and Lucas County, making them a better place in which to live. Judge George Kiroff said of Mr. Kelly that when he was party chairman, “In 25 years, he never asked anything of a public official except that he do his duty.”

Judge John Potter, a Republican, said that Mr. Kelly “practiced the art of politics in an eminently fair and honorable way.  He devoted his life to the political process and to making this a beautiful country. Mr. Kelly is a beautiful person.”

Another Republican, Judge Harvey Straub, said “he is one of the best of the good guys.”  Mr. Kessler, Mayor of Toledo said, “John, the city of Toledo is a better city because you have been here.”

A recording, part of the collection at the University of Toledo, consists of two reels. One is of Kelly’s retirement dinner on Oct. 30, 1966, at which speeches were made by Frazier Reams, Jr., then a gubernatorial candidate, former governor and Toledo mayor Michael DiSalle, Congressman Thomas Ludlow Ashley, Senator Edward M. Kennedy, and Mr. Kelly’s brother Msgr. lgnatius Kelly.

Responding to the remarks of others, Mr. Kelly said that he was deeply touched and declared that, “this is my shining hour. Thank you for the memories.  This is truly the best year I’ve ever had.” 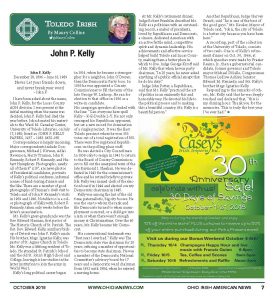 Out and About Ohio: Music and Events in July