I used to feel like a man trapped in a women’s body, but then I was born.

The Cohens were at the dentist office.  Mr. Cohen made it clear that he was in a big hurry.  No gas or needles or any of that stuff, just pull the tooth and get it over with.  The dentist complimented him on his bravery and asked “which tooth is it?”  Mr. Cohen turned to his wife and said; “Show him your tooth honey.”

A husband and wife who worked for the circus went to an adoption agency. The social workers there raised doubts about their suitability. The couple then produced photos of their 50-foot motor home, which was clean and well maintained and equipped with a beautiful nursery. The social workers then raised concerns about the education a child would receive while in the couple’s care. “We’ve arranged for a full-time tutor who will teach the child all the usual subjects along with French, Mandarin, and computer skills.”  Then the social workers expressed concern about a child being raised in a circus environment.  “Our nanny will be a certified expert in pediatric care, welfare, and diet.” The social workers were finally satisfied. They asked, “What age child are you hoping to adopt?” “It doesn’t really matter … as long as the kid fits in the cannon.”

A knight and his men return to their castle after a hard day of fighting.  “How are we faring?” asked the King.  “Sire”, relied the knight, “I have been robbing and pillaging on your behalf all day, burning the towns of your enemies in the west.”  “What?” shrieks the king, “I don’t have any enemies in the west!”  “Oh”, said the knight, “Well you do now!”

Two cannibals are eating their dinner and one cannibal says to the other, “I don’t like my mother-in-law very much.”  The other cannibal replies; “Well, just eat your chips then!”

A man came home after working the night shift and went straight to the bed room.  He found his wife asleep with the sheet pulled up over her head.  He is aroused and crawled under the sheet and made love to her.  Afterward he hurries downstairs to get something to eat.  He was startled to find breakfast on the table and his wife pouring coffee for him.  “How did you get down here so fast?”  He asks. “We were just making love.”
“Oh my God,” his wife gasped.  “That’s my mother up there.”  She complained about having a headache when she came over.  I told her to lie down for a while.”  Rushing upstairs, the wife ran to the bedroom.  “Mother, I can’t believe this happened.  Why didn’t you say something?”  The mother-in-law huffed; “I haven’t spoken to that jerk for fifteen years and I wasn’t about to start now.”

A man comes home from the doctor’s office with a new hearing aid.  It’s the latest miniature electronic model with a silicon chip and all the works, worth five thousand dollars.  He walks in the door and proudly shows it to his wife.” It looks fine,” she said.  And he replies, “Half past seven.”

I went to the bank the other day and asked the teller to check my balance.  She pushed me over. 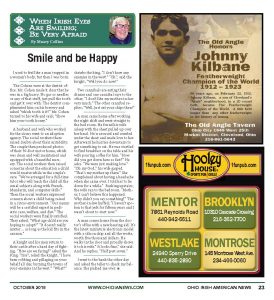 Jokes! When Irish Eyes Are Smiling …

When Irish Eyes Are Smiling … Be Very Afraid ~ Jokes!