On October 4, 2018, John Carroll University’s Peace, Justice, and Human Rights program gave its inaugural Peace Leadership Award for outstanding work in peacemaking and peacebuilding to Raymond Lennon. In the words of Dr. Philip Metres, “Lennon’s skills as the logistics coordinator of the JCU Ireland Peacebuilding Program are matched only by his ability to befriend quite simply everyone in Northern Ireland, to include all manner of voices in our program. Raymond has been the crucial coordinator on the ground for John Carroll University and our program simply could not have happened without him—regularly meeting the likes of both Ian Paisleys (Senior and Junior) and Martin McGuinness, among others.”

Born and raised in Belfast, Raymond Lennon went to St. Malachy’s for high school and Queen’s University for his education degree. He taught for 27 years in one of the most troubled areas of Belfast. Several of his students were killed during the Troubles, yet he was always an advocate for peace and daily spoke to his students about the futility of violence.

Raymond maintained a good relationship with the British Security Forces and the IRA; he could get along with everyone. He became a collaborative member of the Clonard Community as a lay person, and assisted Father Alec Reid in his peacemaking efforts in the Basque region of Spain. In 2011, Raymond received his master’s at Queens University in anthropology, focusing on the “Emotional Force of Transmitted and Appropriated Memories.”

Raymond Lennon represents the steadfastness of the everyday citizen, who does the work of peacebuilding one relationship at a time, behind the scenes and outside the view of the camera. These are the secret heroes of Good Friday, and indeed of any vibrant society. A paragon of what John Paul Lederach calls the moral imagination, Lennon shows compassion, curiosity, creativity, and courage in the world often saturated with hate, close-mindedness, stubbornness, and cowardice. 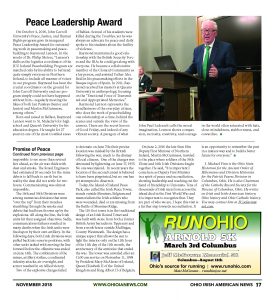 The Many Stages of Melissa Fitzgerald, Part II