It started in the eighties, along with big hair and shoulder pads, Irish self-confidence also grew. Ireland stepped out of the shadows of famine and trouble and decided to take their place on the world stage.

This move was inspired or shoved along by Charles Haughey, a leader with an ego built to move mountains. The Irish did some things very well and he knew it. One of those things was butter. In that product, Irish agriculture was still only a step or two away from how your grandmother did things. That had to have merit.

Butter; the one ingredient that is, despite all of our contrivances and manipulations and saturated fat-infused nightmares, at the heart of so many dishes that we like. Some beloved American foods seem more like butter delivery systems than food in themselves; popcorn, bread, corn-on-the-cob to name a few.

So why then have we settled for bad butter, or worse again, greasy yellow mystery spread, if we like it so much? The main fault for this is rooted in some ill-conceived medical studies, the result of which have actually contributed negatively to the health of many citizens of western societies.

The medical establishment originally concluded that people should not eat saturated fat, which drove many well-intentioned folks to choose highly processed trans-fat products for their morning toast.  These products ended up being worse than what they replaced, along with being a little disgusting to eat.

Eventually, we caught up to simple, and Kerrygold was there waiting. It had been slipping into American markets in that first quarter of the year, anticipating St. Patrick’s Day. Then it would sort of disappear again until next year, except not completely. The trend was beginning for more natural foods and Kerrygold is not a hard sell once you taste it; it is just delicious.

The taste is supposedly enhanced because Kerrygold has more butterfat. That statement kind of makes me wonder what else could be in there. What I do know is that even an Aer Lingus cardboard scone is automatically made moderately edible just being in proximity of the gold-foiled little rectangle of butter.

If you haven’t eaten it yet, where have you been and where do you shop? Kerrygold is packaged in a shiny gold package with an idyllic silhouetted scene of cows grazing placed front and center. After opening the lovely gold package and removing the butter from the interior parchment, the color shocks the first time. Even the hypothetical color butter on most color palettes is a pale tint of yellow. But Kerrygold bursts forth in primary yellow, deep enough to be slightly off-putting.

Then you say to yourself, well it’s the green grass that those cows eat in Ireland that probably makes it this yellow, and the seduction is complete. You belong to Kerrygold and you can cheat on this butter, but you know it is going to be with second best. Why bother?

While it may seem fancy to us, Kerrygold is the everyday butter of Ireland. They put it out on their tables by the half pound, the size of the Irish butter dish. They love their butter and it may seem unhealthy, but until recently, Ireland did not consume all of the processed foods of other countries. Many immigrants to the US are a little horrified at the white salty paste that passes for butter here.
Ironically, from its inception, Kerrygold, was designed more for mass-marketing than feeding the indigenous Irish. Kerrygold was named and promoted from the start to be an exported product. 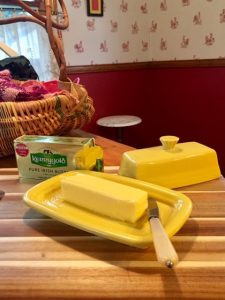 It was “born” on October 8, 1962 in Manchester, England. It was sold in Ireland and England primarily, with an eye on expanding to the European markets. The global domination of Kerrygold ended up being a fluke of timing and tastes. Years ago, eating plain butter would have been perceived as primitive and unhealthy, anyone who ate anything that didn’t contain about thirteen unpronounceable chemicals just didn’t care about themselves.

It is now the number one butter in Germany. It is sold in sixty other countries around the world. It is second only to Land O’Lakes in the US. While Kerrygold is a little more expensive, it packs a flavor punch that allows you to use a little less.

Meanwhile, the American farmers were caught napping on this front. They did not awaken with smiles on their faces ready to embrace the Irish immigrant. America’s dairy heartland, Wisconsin, has banned Kerrygold based on some nonsense that they are not completely truthful about the “grassfed cows,” because sometimes the cows eat other stuff too.

This is not so much a trade war as an attempt to ban Kerrygold from crossing its borders. Let me know how that works. The Irish Mafia is probably already at work smuggling the gold stuff into Kenosha. The people of Wisconsin want their butter and if America wants to compete here they need their own grass-fed cows. This stuff is more addictive than any moonshine I’ve ever tasted. Even Martha Stewart and the Barefoot Contessa, Ina Garden are hooked.

It’s even being abused! There is some type of strange cult of people who use the butter to make something that they call bulletproof coffee. Who outside of a Weight Watchers meeting would order a hit on butter-laced coffee?  The answer is the Keto diet fans who claim that mixing coffee with butter gives your day a healthy boost; the bulletproof is how you feel after consumption, not how the coffee needs to be.

I am all for feeling good, but a buttery croissant is more appealing than buttery coffee. The recipe for the bullet proof butter runs as follows: quality coffee, coconut oil and you guessed it, butter from grass fed cows. Hmm, what could that be? Fans of the recipe swear that it triggers weight loss and boosts cognitive functioning.

If you aren’t a Kerrygold fan already, the Thanksgiving feast is a great time to try it. Maybe not in everything you make, but maybe at least on your table. You could put an ol’ half-pounder out.  Once you start, you can’t go back…..

Don’t Forget, Send Lisa (olisa07@icloud.com) and John (jobrien@ohioianews.com) your Akron area Irish events news and pics so we can let everyone know. Deadline is 10thof the month, for the following month, so Jan 10 for February issue., etc …

*Lisa O’Rourke is an educator from Akron. She has a BA in English and a Master’s in Reading/Elementary Education. Lisa is a student of everything Irish, primarily Gaeilge. She runs a Gaeilge study group at the AOH/Mark Heffernan Division. She is married to Dónal and has two sons, Danny and Liam. Lisa enjoys art, reading, music, and travel. She enjoys spending time with her dog, cats and fish. Lisa can be contacted at olisa07@icloud.com. 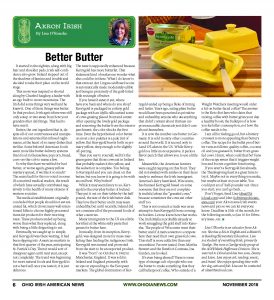