On the eastside of this fair city, the Irish have been known to partake in a wager or two from time to time.  I spent the day researching and was eager to share when we convened at The Pub. The tangential topics of Cleveland historical probes and pints were foreordained to coalesce.  A laptop on the bar and a wager of pints.

The number of references to arrests for ill-fame in the 1850s was daunting for those with Irish surnames.  Our wager soon forgotten, we perused our OhioIANews and discussed Bishop Gilmour’s excommunication of our members of the Ladies Land League.  We looked up Mary Rowland’s response to the Bishop:

“A well-attended meeting of the Ladies Branch of the Land League was held last evening in Parnell Hall, at which the President, Miss Mary Rowland, made the following spirited speech:
Ladies of Parnell Branch: The Bishop has uttered his anathema and we must let him see that we are not afraid. I am proud to see so many here this evening and we will continue this holy work for our country in the face of every obstacle. We are to be excommunicated for what? Because we meet here to discuss the rights of Ireland and not religion. The Church which our forefathers died for is now to be used as a weapon to crush us down. Bishops and priests in Ireland and in this country have upheld the Ladies Land League. This bull has been issued simply to terrify and nothing more. Hell and damnation is held before us because we desire to do all we can to help the suffering people of our native land. Let us show Bishop Gilmour that we are not afraid. God never made excommunication. God is more merciful. It is the work of priests and is done to further their own ends. The one policy has been to keep the Irish people in ignorance and subjection. Bishop Gilmour did a very wrong thing when he uttered the sentiments that are credited to him in the Catholic Universe. He has placed himself open to censure. A few may be terrified by his denunciation but those who love their country never will. I would like to ask, what would the Roman Catholic Church do without the Irish? He says we are unwomanly and that we do unwomanly things when we meet here and deliberate together. If to love our country is heresy then I most certainly am a heretic. He advises us to be the “ornament of the family circle,” etc. I suppose he wants us to remain at home like wall flowers. He must remember that we all have to work for a living. He intimates that every woman here is a virago. Shame that we should be called thus! As for the threat of excommunication, I think we are able to stand that. I have faith in the Irish people. No one can be excommunicated for loving their country. All he thinks is necessary for the Irish people to do is to subscribe and build churches for him. They must not have a country; no, that is heresy. Let us then stand firm and go quietly about our work, doing all we can for Ireland.

The sentiment above expressed was echoed by all the ladies present. It is evident that they propose to defy the Bishop.” –Cleveland Plain Dealer, June 3 1882.

Things had changed since the 1850s.  Irish female immigration increased in the 19thcentury.  Historians noted that female immigration from Ireland was in direct proportion to limited opportunities for women on the island.  In 1880 Cleveland, we witness this immigration in the hotels and boarding houses downtown.  The census illustrates the number of single female Irish present and working as servants.

This was not singular to the Cuyahoga. In New York, 74% of the servants were Irish women.  The industrialization of linen manufacturing created a displaced female workforce in Ireland.  America became a better career move.

Marriage also changed in Ireland post famine. Dowries continued to be less common and people were getting married later in life.  Irish immigrants had a greater chance of getting married in America than their cousins in Ireland. However, there was still fifteen percent of the female Irish immigrants who did not marry.  This is not to say immigration motivation was to search for a spouse.

Mary Rowland notes that, “We all have to work for a living.”  Single female Irish immigrants did work.  After finding the fortitude to leave their place of birth, their families and all that they knew, they came to America and made good.  Those who took positions of servants earned enough to support themselves, to assist in bringing relatives to America, and to contribute to their parish and to the Irish cause.

The Ladies Land League garnered the patronage of such Irish immigrants and signaled the shifting position of women and of Irish women in America.  This did not go unnoticed.  Bishop Gilmour’s excommunication of the women of the Land League highlighted the intersections of gender, church and country.

The Ancient Order of Hibernians in Cleveland “repudiate and condemn” the female members as “un-Catholic.”  Hibernians were still in the Land League and a few months before the Bishop’s Bull held a large Land League meeting at Immaculate Conception.  The Hibernian Rifles voiced their support for the Bishop as well.

The Land League would not last.  In the few years it operated in America, it was able to remit substantial contributions to Ireland.  As an ideological approach, it was a necessary evolutionary stage in the movement towards Irish freedom.  In Cleveland it illustrated the historical connection our town had to national and international movements.  In Mary Rowland it illustrated the commitment of Irish women to the freedom of Ireland. 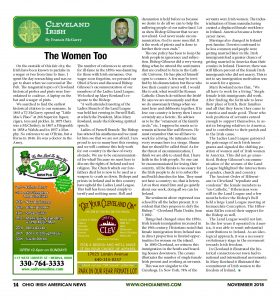 From So Little Sleeping

Cleveland Irish: The Irish and the Law