Illuminations: The Promise of Peace
By:  J. Michael Finn

The 1998 Good Friday Agreement has been effective in bringing peace, but only in part. The accords did end most of the violence and brought some measure of political cooperation between the sides.  The Northern Ireland assembly is currently in a period of non-existence after it collapsed in January 2017. Periods of discussion to restore the assembly have failed and the island of Ireland remains divided. Reconciliation still appears to remain a far off hope.

This month we commemorate the 100thAnniversary of the end of World War I. When it began in 1914 many considered it a possibility that the war could bring about the reconciliation between the Unionist and Nationalist populations of Ireland. Willie Redmond, British Army officer, Member of Parliament and brother of Irish Parliamentary Party leader John Redmond, was convinced that the shared experience of the trenches would overcome the separation between Unionists and Nationalists.  In December 1916, he told a friend: “It would be a fine memorial to the men who have died so splendidly if we could, over their graves, build up a bridge between North and South.”

One of the battles where Irish cooperation was evident was the Battle of Messines (June 7-14, 1917).  Thebattlewas conducted by the British Second Army, on the Western Front near the village of Messines in West Flanders, Belgium.  The tactical objective of the offensive was to capture the German defenses on the Messines Ridge. The British plan was to clear the German army from the Belgian coast to prevent them from using the coastal ports as bases.

The battle was particularly significant in the history of Ireland due to the contribution of both the British 16thIrish and 36thUlster Divisions. Despite fears in some quarters that the combustible Irish mixture of religion and politics would adversely affect their fighting cohesion, the two Irish divisions fought successfully together at Messines.

Between June 1stand 6th, British artillery began bombarding the German lines. The objective of this week-long bombardment was to thoroughly demoralize and shock the German troops holding the trenches. To achieve that objective, using 2,266 field guns and howitzers, the British fired 3.5 million shells into the German defensive zone.

British forces had put careful planning into the Battle of Messines Ridge. For the previous 18 months, soldiers (including Welsh miners brought in for their mining expertise) had worked to dig 19 deep tunnels underneath the German trenches.  At the end of the tunnels they placed nearly 1 million pounds of explosives. The tunnels extended to 2,000 feet in length, and some were as much as 100 feet below the surface of the ridge.

Starting at 3:10 a.m. on June 7, 1917 British engineers detonated 19 explosive charges in the tunnels. The charges were each fired by soldiers and 17 tunnels went off a few seconds apart up and down the length of the ridge, sending geysers of earth, steel, concrete, and bodies flying into the air and searing the dark sky with orange flame.  Over 10,000 German soldiers died instantly and are considered missing, another 25,000 were injured (many suffered shell shock).

The resulting explosions were the largest human-caused explosions before the nuclear era. The sound of the detonation was reportedly so tremendous that it was heard in Dublin and in London. The blasts created huge craters in the surrounding landscape. Just one of the craters was 250 ft. in diameter and 40 ft. deep. As the British commander said to the press the day before the detonation, “Gentlemen, we may not make history tomorrow, but we shall certainly change the geography.”

Following the blasts, many of the leading assaulting troops found it impossible to see more than several feet ahead, as the air was thick with dust and smoke. The Royal Engineers had estimated 20 seconds for the mine debris to fall back to earth but in reality the dust did not settle for two hours. Communicating was almost impossible.

The 16thand 36thDivisions were among numerous divisions that went “over the top” from their trenches stumbling through the smoke and debris that had been thrown up by the explosions. All along the line, the Irish units hit their assigned objectives. Sadly, communications failures resulted in many deaths when the Irish units were fired upon by their own artillery.  In the following days, both Irish divisions were pulled back into reserve positions, with other units tasked with moving the line forward before the offensive was ended on June 14th. The combination of the mines, artillery strikes, coordinated infantry attacks, air oversight, and armor resulted in an Allied victory.

Two of the explosive charges failed to detonate on June 7th; their precise location was mislaid by the British following the war, much to the dismay of local citizens.  One of the charges was detonated by lightening on June 17, 1955. No one was injured.  In recent years the location of the second tunnel is believed to have been pinpointed, but no one has yet attempted to disarm it.

Today, the Island of Ireland Peace Park, also called the Irish Peace Tower, standsoutside Messines, Belgium and memorializes the Irish soldiers who were wounded, died or are missing from the Battle of Messines Ridge.

The 110-foot tower is in the traditional design of an Irish Round Tower and was built with stone from both a former British Army barracks in Tipperary and from a work-house outside Mullingar, County Westmeath. The design has a unique aspect that allows the sun to light the interior only on the 11th hour of the 11th day of the 11th month, the anniversary of the armistice that ended the war. The tower was unveiled after an 11:00 am service on November 11, 1998 by President Mary McAleese of Ireland, Queen Elizabeth II of the United Kingdom and King Albert II of Belgium.

On June 2, 2016 the late Sinn Féin Deputy First Minister of Northern Ireland, Martin McGuinness, traveled to the place where soldiers of the 36thUlster and 16thIrish Divisions fought together. He said, “It is important I come here as Deputy First Minister in a spirit of peace and reconciliation, showing leadership and reaching out the hand of friendship to Unionists. Tens of thousands of Irish men from across the island died in the First World War and it is important to recognize that. They are part of who we are. I hope this visit is a further step towards reconciliation. It is an opportunity to remember the past in a mature way and to build a better future for everyone.” 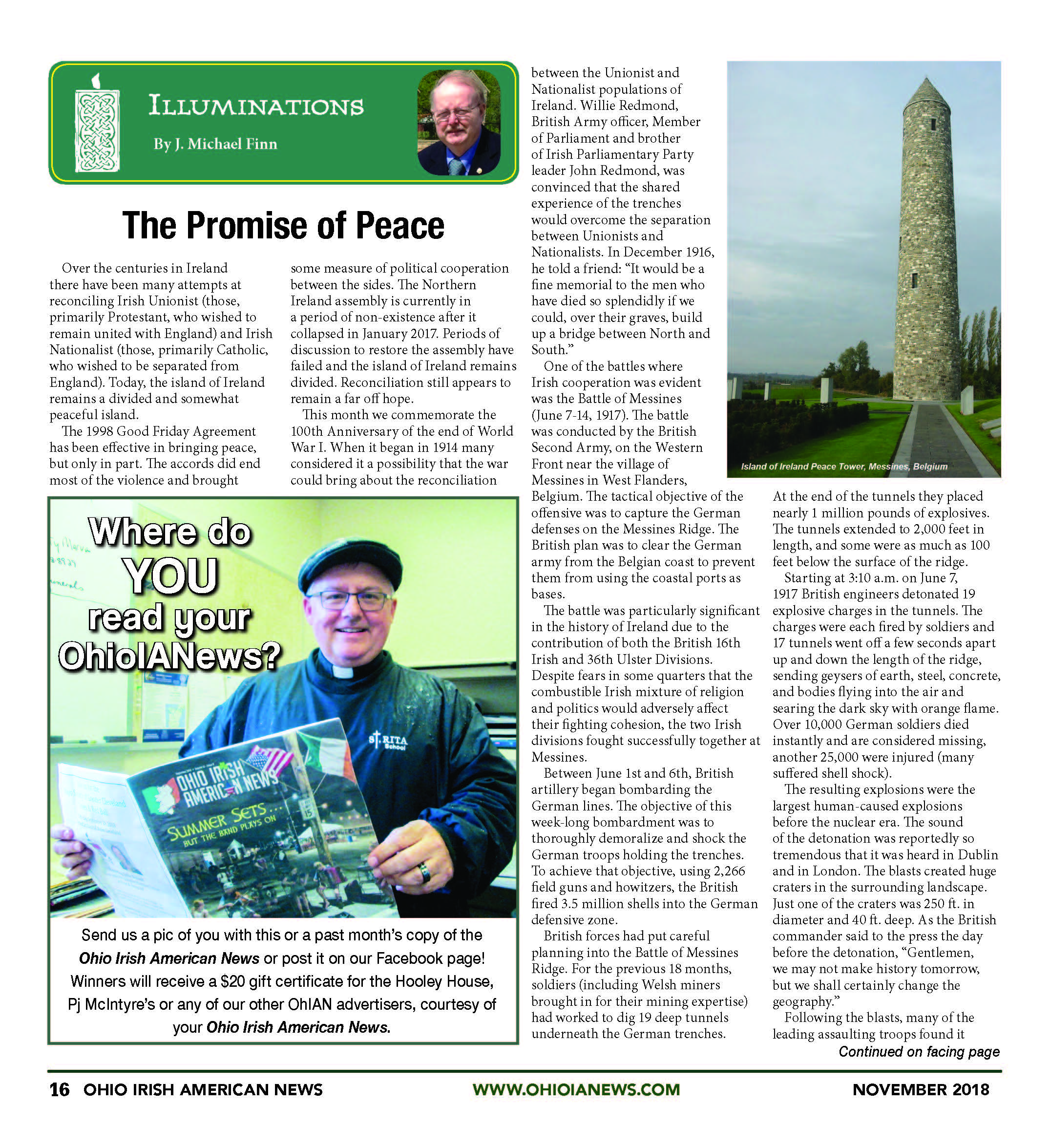 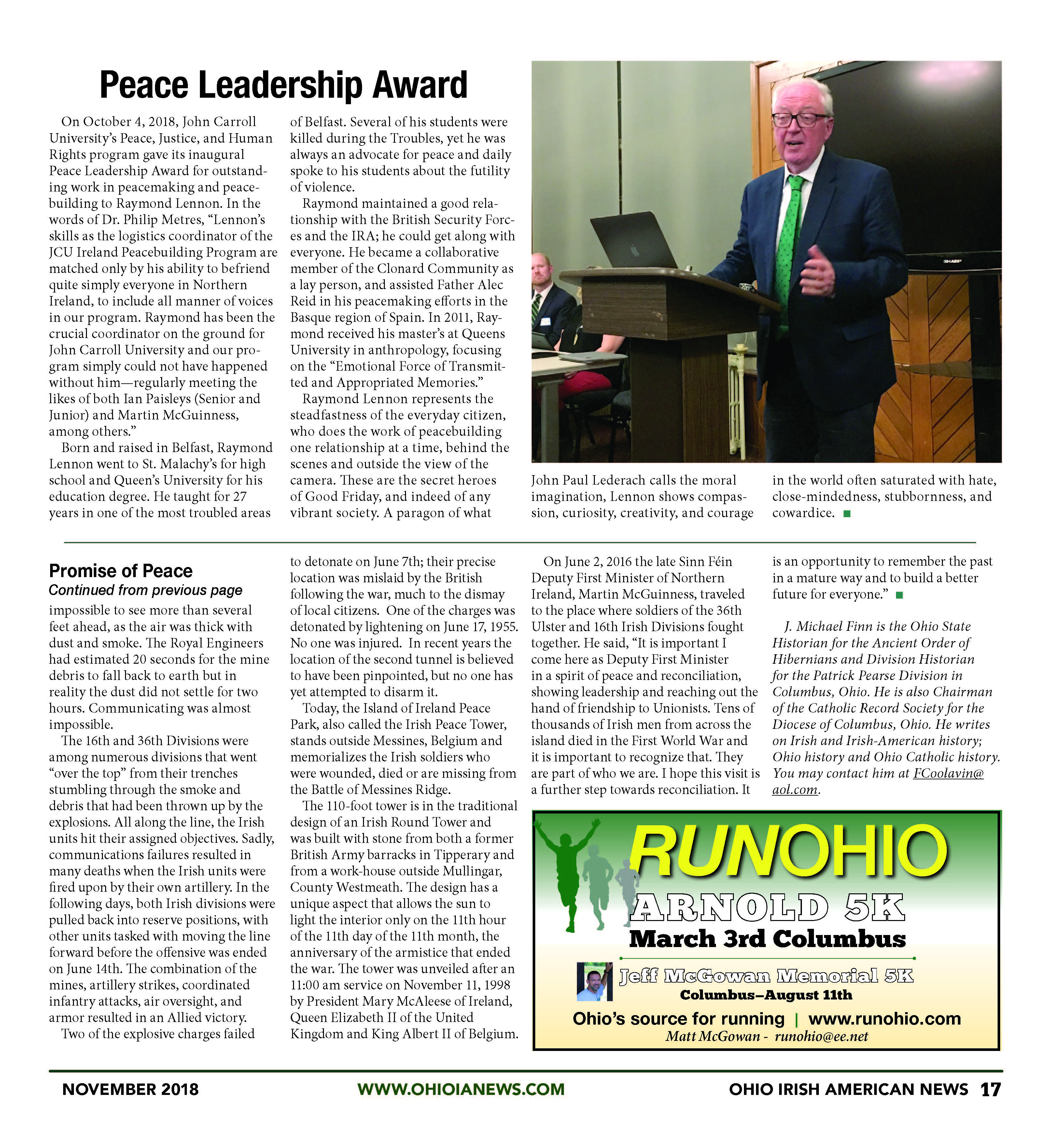 My Father: Custodian and Calligrapher