The Irish American Law Society of Cleveland teamed up with Cleveland Marshall College of Law to present their Third Biennial Symposium in Cleveland on the last weekend of September, 2018. The event was approved for continuing legal education for Law Society members by the Ohio State Bar Association, and included several social hours, a slate of well-prepared experts, and was coordinated with the Mayo Society of Cleveland’s Green and Red Ball, honoring Julie Boland of Ernst & Young LLP.

Their presentation included coping with dawn raids by police coordinated internationally to produce verdicts up to $950 million against multinational corporations due to price fixing cartels by the employees of these companies. Both criminal and civil actions can arise from evidence including what could seem otherwise harmless emails between competitors. The outcome has a chilling effect on potential defendants engaging in dialogue that can be retrieved from emails or text transmissions.

Their presentation distinguished problems in illegal immigration and how they are handled in contrast to the prosecution of violent crimes, drug trafficking and gun offenses by criminals from other countries. Discussion also addressed the process for aliens to gain legal immigration status, citizenship and green cards.

Lunch: Attendees and faculty were provided lunch in the atrium of the Cleveland Marshall Law School with reflections by Ohio Supreme Court Chief Justice Maureen O’Connor and the history of the O’Connor clans fascinating  journey across the United States to Cleveland.

In a broad ranging lecture, Mr. Luck used a story as an example of change for the better. He explained the change of policy allowing beer to be served at WVU football games, which turned out safer, better for spectators, and earned money for the athletic programs at the school. His presentation ranged from fundamental fairness issues for student athletes, to the future of the two money making sports (i.e. football and basketball) for elite NCAA programs. He was also able to pinpoint issues of fundamental fairness to the student athlete going forward.

Session 5: British Military Intelligence and Collusion with Outlawed Loyalist Paramilitaries –  Visiting Professor Dr. Ruan O’Donnell of the University of Limerick brought us to the heart of darkness with support from local attorneys John Myers and Chair Jack Kilroy. Their presentation began with the wholesale arrest and internment of Irish Nationalists in the North of Ireland in the 1970s without charge, and the subsequent interrogation techniques used against this population, up to the more recent pattern of collusion between the British Intelligence and outlawed Loyalist paramilitaries, which goes on to this day.

These covert operations were highlighted by the outrageous 1985 plot to assassinate Irish Prime Minister Charles Haughey by British operatives in the North. Ironically, the response of the outlawed Loyalist paramilitaries brought the issue to light when they sent a message stating their refusal “…to carry out work for the Dirty Tricks Department of the British.” Time ran out, but Mr. O’Donnell was most generous to carry on the discussion about the United Kingdom’s violations of the European Convention of Human Rights after class ended.

The event was a great success, and credit to President Ann Marie Hawkins of the Irish American Law Society.

*Neil J. Conway – Neil has written several human rights articles about Ireland that are digitalized by the Linen Hall Library in Belfast as part of their “Divided Society Project.” 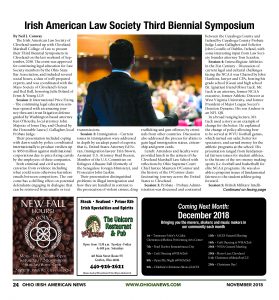 Mayo Society of Greater Cleveland Prepares for the Mayo Ball