ON THIS DAY in IRISH HISTORY NOVEMBER

8 November 1847 – Birth in Dublin of Bram Stoker, author of Dracula.

10 November 1798 -Conviction of treason of Theobald Wolfe Tone during the Irish Rebellion of 1798, regarded as the father of Irish republicanism.

14 November 1923 -W. B. Yeats receives the Nobel Prize for Literature.

18 November 1922 -Court martial of Erskine Childers begins for his role in the Irish Civil War.

Bringing you the movers, shakers and music makers in our community each month. 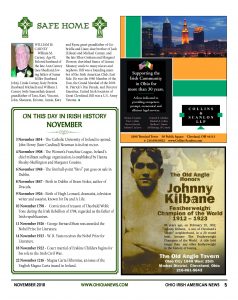 DO NOT Miss: Celtic Voyage; We Banjo 3

Editor’s Corner: Losing too Many Heroes, by John O’Brien, Jr.