The last week of September saw the Cleveland Irish welcome fond friends from across the Atlantic Ocean with open arms once again, to what we hope they consider to be a home away from home.
The weekend of the 2018 Mayo Ball in reality started the Wednesday before the Ball, with the arrival of guests from Counties Mayo, Galway, Monaghan, Kerry and Dublin.  Our ties with Mayo have stretched further afield as the twinning of Cuyahoga County with the Parish of Achill has now become a highway for transporting companies from Ireland to Northeast Ohio, where they can promote their work and sell their products.  This is made possible with a relationship fostered between the Mayo Society of Greater Cleveland and Údarás na Gaeltachta (Gaeltacht Authority) in Ireland.

The economic mission of Údarás is to provide funds for enterprises in the Gaeltacht (Irish speaking areas in Ireland, primarily on the west coast of the country.)  This year, Údarás made it possible for three such companies to travel to northeast Ohio in an effort to find a new market for their products.
Irish American Whiskey Supplies Ltd., Bunnacurry, Achill Island; Lough Mask Distillery, near Tourmakeady; and Dingle Distillery in Kerry brought their whiskeys, gins and expert knowledge about the history of this ancient craft in Ireland.  They spent two days presenting their products to a number of breweries, distilleries and restaurants in Cleveland and provided a Tasting/Sampling at the Tower City Observation Deck on Friday night.   Sinéad Ní Fhatharta,Enterprise and Employment Manager of Údarás, was on hand, introduced the companies and spoke about the role of Údarás and the hopes for additional opportunities for Irish companies in Greater Cleveland in the future.

The Irish Ambassador to the United States, Mr. Daniel Mulhall unfortunately was unable to attend, but submitted an article for our Program Book reminiscing about his time in Cleveland earlier in 2018, where he spoke about the impact of Brexit on Ireland at the City Club.  Brian O’Brien, Consul General of Ireland Chicago, that serves Ohio, is now an annual attendee at our Ball.

Comhairle Contae Mhaigh Eo(Mayo County Council, the judicial and administrative government unit of the County) was present again, with representatives from three of the four electoral areas:  Michael Holmes of West Mayo; Damian Ryan of Claremorris and Blackie Gavin of Castlebar.  Councillor Gavin also serves as the Cathaoirleach (Chairperson) of the Council; Peter Hynes, Chief Executive of the County; and Martina Hughes, Head of Communications, were also in attendance.

The delegates from the National University of Ireland – Galway were Board Member Dr. Seamus Kavanagh and his wife, Nuala Kavanagh.  Alumni were present in the Ballroom including Marion Smalley.  From John Carroll University, Dr. Jean Colleran was in attendance.  The relationship between these two universities was made possible by the Scholarship established by the Mayo Society of Greater Cleveland in 2012, that to date has benefitted twenty-two students from both JCU and NUIG.

The Irish American Archives Society (IAAS) and the Mayo Society support each other in their work and this year was no different.  Brian Maguire, an Irish expressionist painter from County Wicklow, has an exhibit showing at Cleveland State University Art Gallery.  This was made possible by the two organizations working together on this endeavor, that was spearheaded by Margaret Lynch, Executive Director of the IAAS.  Additional support from the Law Firm of Collins and Scanlon, and Louis Finucane brought the plan to fruition.

Maguire’s work primarily deals with themes of physical and political alienation.  His focus on the forgotten has brought him to prisons, hospitals and other institutions around the world.  Brian was in Cleveland during the week of the Ball and the groups mentioned above hosted a reception at the CSU Art Gallery.  There, an audience viewed his work and listened to a quiet spoken man deliver the somber life experiences of those depicted in his art works.

The Ball itself took place at the luxurious Intercontinental Hotel, downtown Cleveland.  Julie Boland, the 2018 Person of the Year, celebrated with her family and close friends.  Murphy Irish Dancers put on its usual stellar performance and Marys Lane and the open bar brought the event into the wee hours of the morning.  Nightcaps were had at Brendan Rings’ Nighttown.

WHK Radio Studio that broadcasts the Gerry Quinn Irish Hours was jam packed on Sunday morning, with most of the overseas guests present, with a few locals including Margaret Lynch popping in.  Those who did not have a flight to catch argued with us about where to lunch.  A coin toss determined P.J. McIntyre’s as the venue.

More stories were shared and discussions had over plates of the All Day Breakfast, making plans for 2019 and promises to make International Mayo Day, May 4, 2019, something special for the Cleveland Mayo community.  Sadly, missed by so many of us was the one and only Kevin McGinty.  Rest in peace dear friend.

Through generous donations from Ernst and Young, Park Ohio, the Boland Family and numerous other sponsors, the Mayo Society of Greater Cleveland is grateful that it can fulfill its commitments to the Scholarship Fund, the Irish Cultural Garden, and the May Dugan Center for 2018. We are grateful to those who contributed articles of interest that brightened up our Program Book, – Annie Brennan, Scholarship Winner, Gerard Bourke from the Lost Valley, Mayo; Erin Stefancin, 2018 Ohio Rose of Tralee; Maureen Egan from Mayo Association Galway; Martina Hughes, Mayo; Pat Harrold, M.D., Tipperary, Brendan Costello, Galway; Sue Mangan, Cleveland.

If you are not already with us, join us now. Membership is open to all those that support County Mayo, our mission and our tradition of philanthropy.  Stay in touch with us on Facebook at Mayo Society of Greater Cleveland.  Visit our website at www.clevelandmayosociety.org 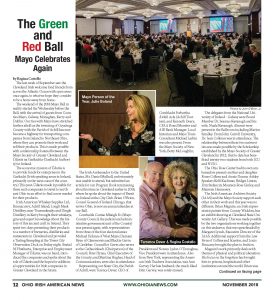 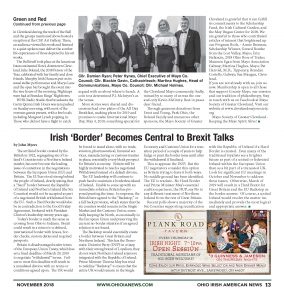 Editor’s Corner: Losing too Many Heroes, by John O’Brien, Jr.

One thought on “The Green and Red Ball: Mayo Celebrates Again”