Blowin’ In: Home
By Susan Mangan

“I will arise and go now, and go to Innisfree,

and a small cabin build there, of clay and wattles made:

Nine-bean-rows will I have there, a hive for the honey-bee,

And I shall have some peace there, for peace comes dropping slow.”

(“The Lake Isle of Innisfree” by William Butler Yeats)

With November approaching, I have been reflecting on images of home. For me, the fragrance of chicken soup simmering on the stove wraps me in my mother’s arms. I have always been cheered by the sight of my light-filled rooms, open windows, and thin white curtain sheers blowing like phantom topsails.

In spring, the heady perfume of blooming lilacs rush through those same windows. The song of cicadas arrives on the balmy breezes of an early summer night. Through the frosted panes of winter, I keep watch for the red cardinal who alights on the skeletal branches of my old plum tree, reminding me that both bird and beast desire the ease of familiarity. The seasons may change, but the comfort of home is constant.

In the name of research, I started to ask my family, “What reminds you of home?” My husband surprised me; aside from his loved ones, the smell of garlic and tomato sauce bubbling away in a stockpot fills him with a sense of home.

My youngest son had the most profound response. He said, “Home is here, but it can be anywhere. I feel at home at school because I am there everyday. I feel at home when we go to Ireland because I love it there. I can even feel at home in the airport because that means we are going to Ireland.”
My fifteen-year-old hasn’t lived long enough to have been separated from the security of family. Perhaps that intangible feeling of home is only made tangible when we are gone from it, when memory becomes sense.

My fondest memories are not grand. They lie in an antique book of childhood verse. They lie beneath a hand-sewn quilt that has followed me from my grandmother’s house, to the bed I first shared with my husband, to the old chair where I nursed my infants during the lonely hours of night.

I have always found peace in simple spaces filled with charm. Having grown up in a small Chicago bungalow, I gravitate toward cozy houses. I enjoy being surrounded by antiques and heirlooms that represent the past. I delight in cooking large, messy meals for my family and friends. When night settles, I love to feel the soft warmth of my Springer Spaniel as she lounges on my bare feet. Ordinary times and simple gifts are the best kind of treasures.

It is no wonder that I was so taken with the rustic, thatched Irish cottage that I visited this past July. Surprisingly, the owner was a young lady studying to be a solicitor. Her intelligence and creative energy was painted across the broad planes of her open face. Blue eyes reflected the authenticity of her person. 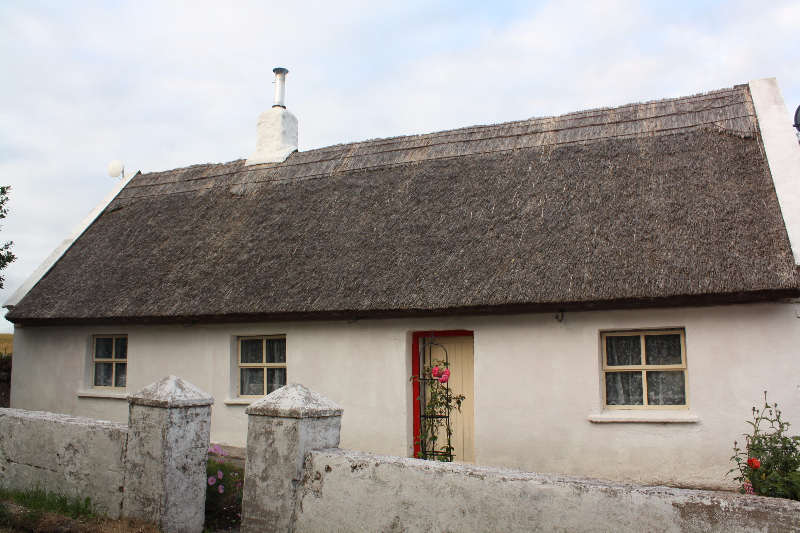 Here was a young woman who embraced originality, unafraid of reaching beyond the norm. Her confidence did not, however, override the warmth of her spirit. She offered us tea and fragrant coffee prepared in a French press.

Having recently moved into the thatched house, she was slowly renovating when budget and time allowed. She had a clear vision as how to marry the traditions of the past with modern sensibilities.

Traditionally, thatched cottages had one main room. The open hearth was the heart of the home. The fires were never left unlit. At night, ash was placed over the embers to prevent them from completely dying out in the night. Field stone retained the heat.

Some homes had a loft above the main room. In others, an alcove was carved into the deep cottage walls near the hearth. Here, elderly members of the family in residence would sleep in the nook to keep warm through the night. When visitors came to call, the nook was often curtained off for privacy.

In the young lady’s home, she retained the flagstone wall and installed a beautiful traditional range. That wall reaches from floor to ceiling and is the central focus of the cottage. The alcove for the elderly has become an entertainment area where a farmhouse style console holds a modern, flat screen television. Form and function merge as the past reaches out to contemporary times.

The windows were small and embedded nearly two feet into the wall. In olden times, cottages were taxed by the amount of windows built into the dwelling. This tax became known as “typhus tax” because of the respiratory issues caused by scanty airflow and the smoke from ongoing turf fires in the hearth. In later years, the windows were still small, but practically speaking, more affordable because less glass was needed.

The cottage I visited did not have a traditional half door, but rather, a small, painted door leading into a small entry walled off from the kitchen. In the past, this “walled room,” served to provide privacy when the half door was open. Not all cottages had this feature though, and the half door served as the largest source of light for the home.

Meanwhile, the door also kept young children in the house and animals out. Unless, of course, the cottage was a byre dwelling, in which the family’s farm animals lived with the family. In such cases, the cottage was often built with the byre facing on a slant away from the hearth to expedite removal of animal waste. Meanwhile, it was believed that cows warmed by the fire would produce better milk. Superstition even held that it was bad luck if the cow could not catch a glimpse of the fire.

The thatched cottage I visited did not have a byre filled with farm animals, but the young lady did have a loyal rescue dog and a few cats to help make the charming house, a home. 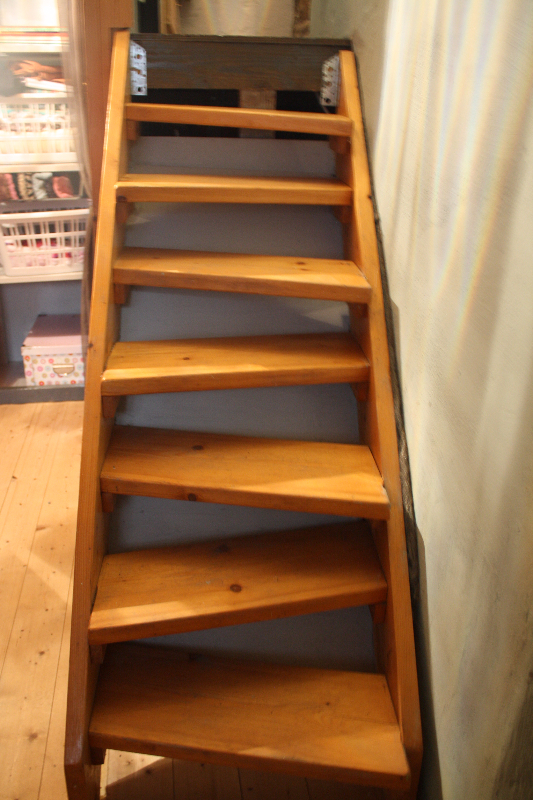 Her home possessed so many quirks that utterly entranced my imagination. Crooked, wooden steps provided a sturdy path up to the bedroom above the hearth. Another set of steps rose from the kitchen wall to a loft on the opposite end of the house. Trailing roses, a white washed façade, and thatched roof provided traditional Irish charm. What impressed me the most, however, were the stacks of legal papers, neatly bundled and tied with pink ribbon, resting on the deep window panes.

As I left, I admired this future solicitor who embraced her unique vision of home and family with a nod toward a bright future, while paying respectful homage to an iconic symbol of Old Ireland, the thatched cottage.

*Sources Consulted: Irish American Mom. “The Thatched Cottage as a Symbol of Ireland.” May13, 2015. 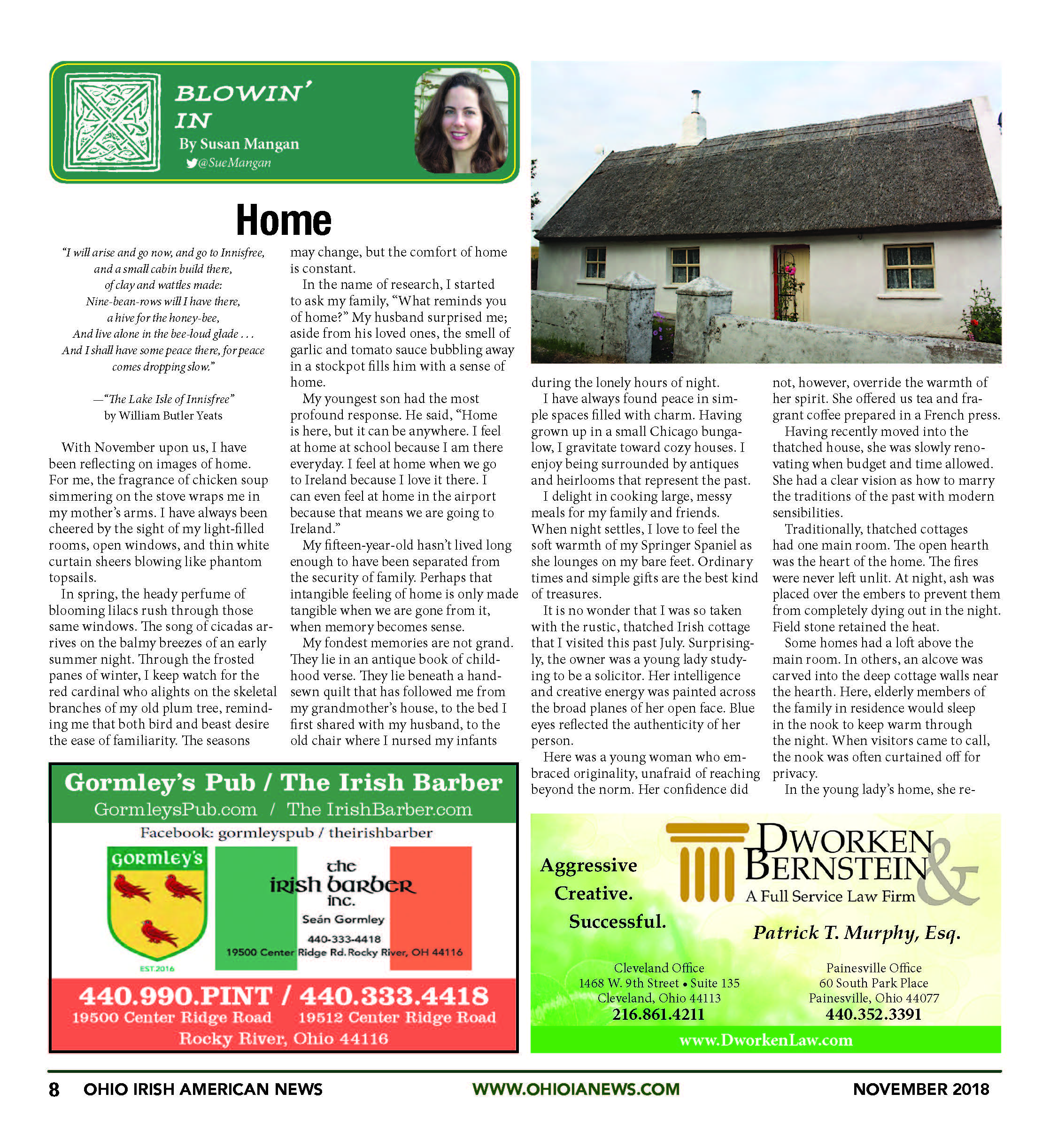 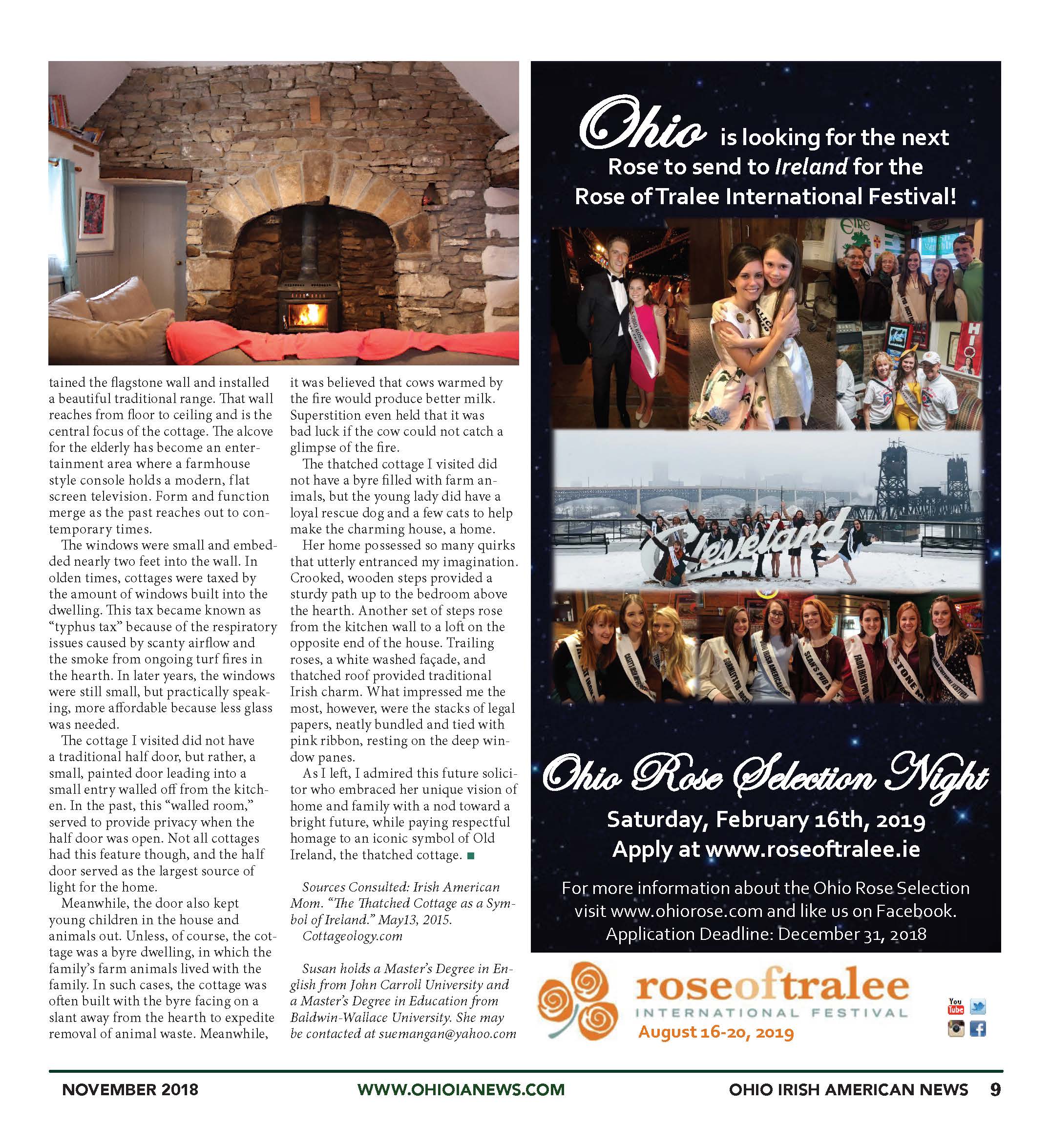 Fields of Glory: Around the Midwest GAA