3 the geographical centre of County Mayo

5 Dubbed “The Lake Angling Capital of the West”

9 Located on the N59, 40km west of Ballina, village on the banks of the

10 Bohola was the birthplace of the great athlete, Martin Sheridan (1881-

11 Situated on the River Deel, near the northern shores of Lough Conn,

13 located on the N59 road midway between Bangor and Mulranny.

15 located adjacent to the Atlantic Ocean between Ballycastle and

17 Located on the intersection of the N60 and N83, the first town you

come to in County Mayo as you travel west.

18 Kilgeever as it used to be known

24 Gaelic speaking rural community on the shores of Lough Mask, used to

be part of Co. Galway

the Western World” around the village area

35 the headquarters of the leading organization in women’s development

in North Mayo – Women of the North West

36 Six miles south of Ballina, the birthplace of Fr Patrick Peyton, the world

40 one of Europe’s major Catholic Marian shrines, is visited by one and a

49 home of the famous River Moy, is Mayo’s largest town

Patrick, known locally as ‘The Reek’.

54 designed in the 18th Century by James Wyatt.

55 A piece of modern sculpture, approx 30ft high, in the shape of an

accordion, dominates the skyline along the main N17 road towards

57 the capital of the Gaeltacht (Irish-speaking) region of Erris

Elizabeth Hunt by the local school master to their emigrant son, John,

4 ‘Ireland’s Titanic Village’ because of the enormous loss of lives, of any

parish in Ireland, on the ill-fated RMS Titanic’s

6 at the foot of the Partry Mountains, the abbey church is the only church

in Ireland, still operating, that was founded by an Irish King.

7 derives its name from the lake below the village, which used to dry up

for part of the year

14 (The Green Village) – is aptly named, located as it is in a fertile strip of

land straddling the borders of Mayo Abbey and Carnacon

16 the birthplace of Raifteirí – the blind poet.

21 situated on the isthmus between Clew Bay and Blacksod Bay

overlooking Achill Island to the south.

26 ifamed as the home of the Land League, an organisation founded in

27 Michael Davitt , cofounder of the Land League, was born on March 25th

1846 during the Great Famine

the story of the infamous appearance of a cloven-hoofed ‘devil’, alleged

29 . Located on the shores of Loughs Conn & Cullen

33 Situated on the N5 between Castlebar and Swinford

37 hosts one of the County’s largest summer festivals: Siamsa Sraide

38 Killala (in Irish: Cill Ala) is six and a half miles north-west of Ballina

39 The ancient Pilgrim Route ‘Tochar Phadraig’ passes through the village

41 located on the intersection of two National Primary routes, the N17 and

the N5, along the eastern border of County Mayo,

43 meaning ‘Quarter of the Fort’. There are over 20 forts in the area.

45 Heritage Centre, is a beautifully restored cottage, formerly the scene of

47 means Mouth of the Ford of the Bird’, perhaps referring to the shape of

Croagh Patrick was once controlled by Mayo’s Pirate Queen,

of Druid worship in the region.

52 nestles on the Mayo side of the Black River, along the border between 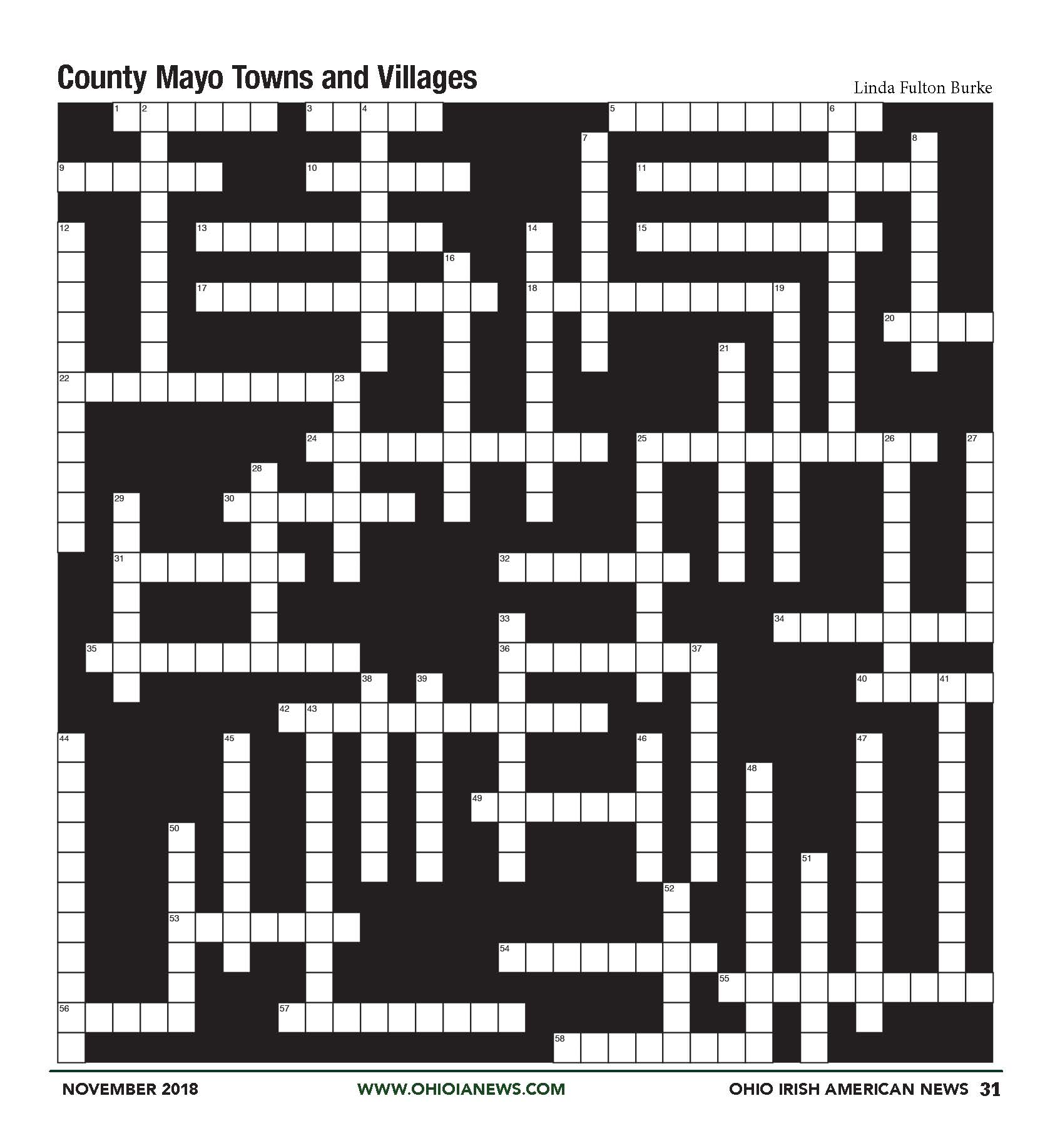