When Irish Eyes are Smiling: They’re Up to Something!
by Maury Collins

Murphy lost a hundred dollars on the Melbourne Cup, a famous Australian horserace. He also lost another hundred on the television replay.
O’Connor always slept with his gun under his pillow. Hearing a noise at the foot of the bed, he shot off his big toe. ‘Thank the Lord I wasn’t sleeping at the other end of the bed,’ Kieran said to his friends in Donegal’s pub. ‘I would have blown my head off.’
Little Michael watched, fascinated, as his mother smoothed cold cream on her face. ‘Why do you do that, Mummy?’ he asked ‘To make myself beautiful,’ said his mother, who then began removing the cream with a tissue. ‘What’s the matter?’ asked little Michael, ‘Giving up?’
Having just moved into his new office in Whitehall, pompous, newly promoted Lieutenant Commander Rodney Grant [Royal Navy] was sitting at his desk when Leading Seaman Jones knocked on his door. Particularly aware of his new position, the commander quickly picked up the phone, told the seaman to enter, then said into the phone, ‘Yes, Admiral, I’ll be seeing him this afternoon and I’ll pass along your message.
In the meantime, thank you for your good wishes, sir.’ Feeling as though he had sufficiently impressed young Jones man, he asked, ‘What do you want?’
‘Nothing important, sir,’ Jones replied without batting an eyelid, ‘I’m just here to connect up your new telephone.’

Robert went to his lawyer and said, ‘I would like to make a will but I don’t know exactly how to go about it.’  The lawyer smiled at Robert and replied, ‘Not a problem, leave it all to me.’
Robert looked somewhat upset, and said, ‘Well, I knew you were going to take a big portion, but I would like to leave a little to my family too!’

Two men arrive at the pub and ordered a couple of drinks. They then take sandwiches from their briefcases and began to eat. Seeing this, the angry bartender approaches them and says, ‘Excuse me, but you cannot eat your own sandwiches in here!’ The two look at each other, shrug and exchange sandwiches.

I’m always amazed to hear of air crash victims so badly mutilated that they have to be identified by their dental records.  What I can’t understand is, if they don’t know who you are, how do they know who your dentist is?

Paula was anxiously awaiting her daughter Janet’s plane to land. Janet had just come back from abroad trying to find adventure during her gap year. As Janet was exiting the plane, Paula noticed a man directly behind her daughter dressed in feathers with exotic markings all over his body and carrying a shrunken head.
Janet introduced this man as her new husband. Paula gasped out loud in disbelief and disappointment and screamed, ‘I said for you to marry a rich Doctor …. a rich Doctor, not a witch doctor!’

The bidding was proceeding furiously and strong when the Head Auctioneer suddenly announced, ‘A gentleman in this room has lost a wallet containing ten thousand dollars. If returned, he will pay a reward of two thousand dollars.  There was a moment’s silence in the auction house and from the back of the room came a shout, ‘Two thousand five hundred.’ 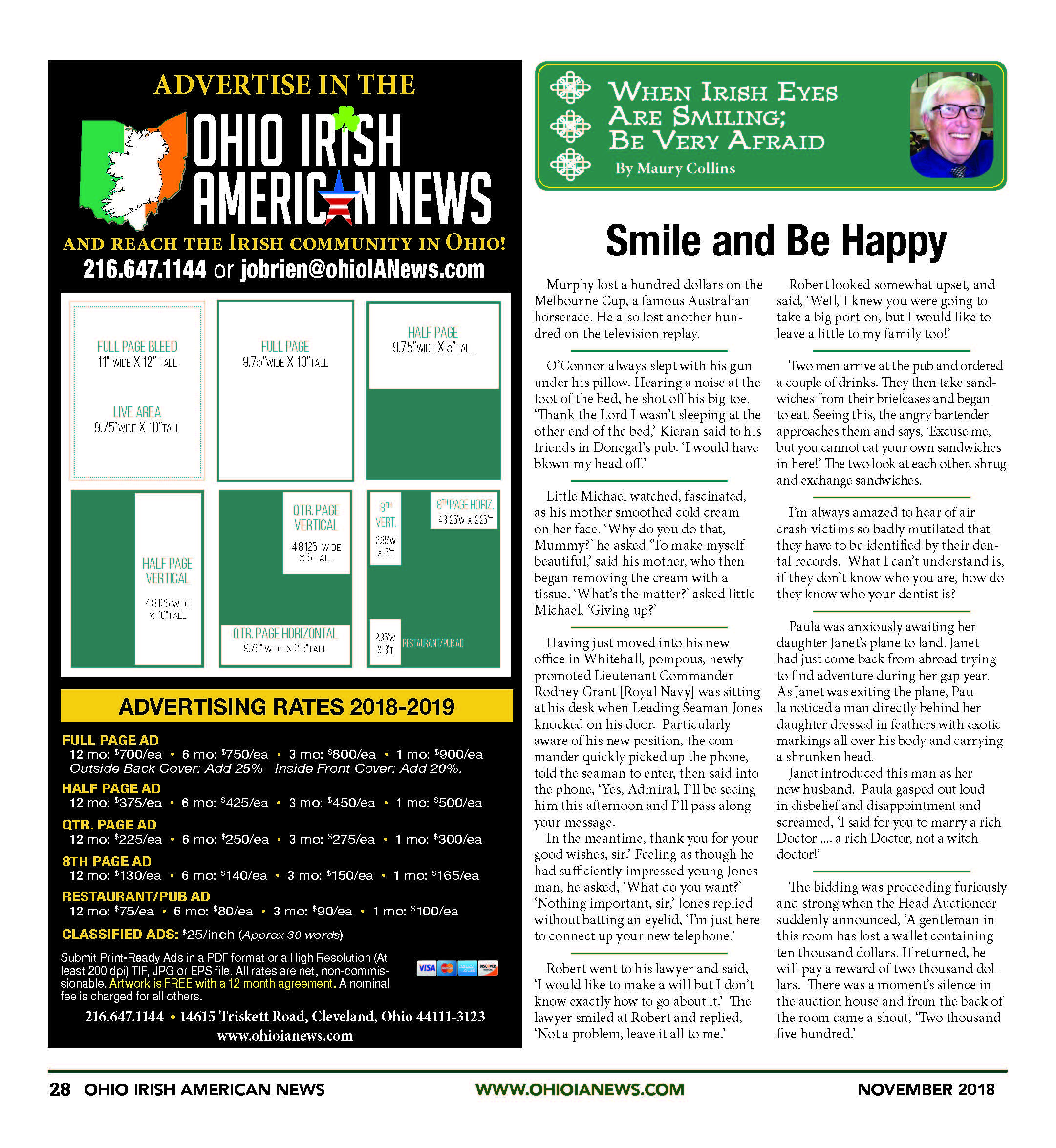 Got Jokes? They’re up to Something …

When Irish Eyes Are Smiling, They’re up to NO Good