The Hibernians will be hosting Carmel Quinn on Saturday November 17, at 7:00pm at the West Side Irish American Club, 8559 Jennings Rd. Olmsted Township. Carmel is from Ballymurphy. She is very active with the Ballymurphy Families and Relatives for Justice who are seeking the truth of what happened on August 9-11, 1971.

This time period is known as the Ballymurphy Massacre. Homes in the area were raided and destroyed. Many Ballymurphy residents were violently assaulted and eleven civilians were killed by the British Army Paratroopers. One of the civilians killed on August 10 was Carmel Quinn’s brother, John Laverty, age 20. Her brother Terry was also beaten and arrested that night. His conviction was overturned in 2015 when, during a hearing, the sole witness retracted his statement.

Fr. Hugh Mullan was also killed as he was ministering to one of the wounded. Joan Connolly, a mother of eight, was shot and left to die on the street.

The families have requested many inquests, but always were met with delay tactics. An inquest was requested in 2016, but were delayed due to funding. Arlene Foster of the DUP deferred bids for extra funding. This decision of Foster’s was condemned by Amnesty International. It was announced in January 2018, that an inquest was due to start in September 2018.

Martin Galvin, National Freedom for All Ireland Chair, invited Carmel Quinn to come to the United States to tell this story. She will be visiting many states and Ohio is honored to be able to host one of her talks.

As Martin Galvin states, “These families are entitled to the truth about the killings of their loved ones. The AOH pledges to help them in their long battle to get that truth and justice.”

In September, AOH National Vice President Danny O’Connell and National Secretary Jere Cole met with the Ballymurphy families. They were escorted to the murder scenes by family members and by members of Relatives for Justice. The Deputy Director of Relatives of Justice, Andree Murphy, said of the meeting with the AOH leaders, “The voices of the families today, as we visited the sites where the eleven were killed gave eloquent testimony to the horror of the killings, the absolute impunity from which the soldiers who took those lives benefitted, and most poignantly the impact that these killings had on the families in the years that followed and to this day.” She continued, ” The timing could not have been better as the British Government attempt to sidestep their international legal obligation to these families and a rearguard action which attempts to defend impunity and disregard victim’s rights is in full swing.”

National Vice President O’Connell stated, “Today we stood, shoulder to shoulder behind the campaign banner with the Ballymurphy families, to pledge American support in their fight for justice and truth.”

Come hear the first-hand story of a families seeking truth and justice for the loss of their loved ones. Irish America needs to be aware and see how we can help. 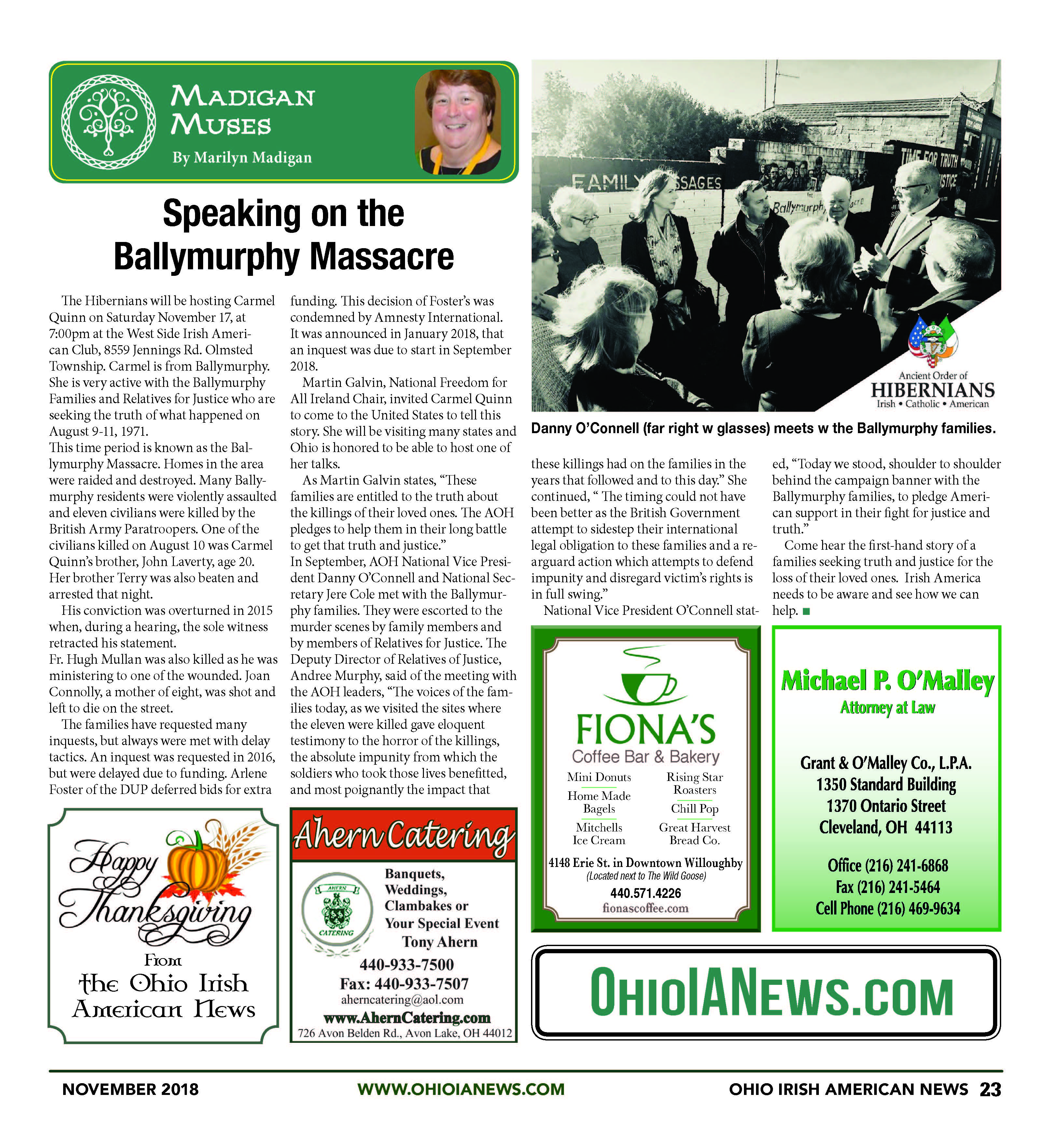 Stone Mad: Walls That Are Built on Stories