In May of 2008, Jack Meehan, Past National President Ancient Order of Hibernians in America wrote about Hibernian Stained Glass windows:

The Irish went wherever there was work. In a young nation, that work was in mills, railroad depots, mining and along canals that spread South and West with the railroads. The AOH was in Arizona when it was still a territory and, of course, in the major metropolitan areas that made up the American Shamrock —-San Francisco, Chicago and the Boston/Philadelphia /New York corridor. Century old Hibernian Halls still stand in Bristol, Pennsylvania; Butte, Montana and in Turners Falls, Massachusetts.
The Catholic church soon followed these migrating workers. Throughout the latter part of the 19thcentury as the church grew, it needed to replace older and smaller wooden churches with newer ones. Thus the stage was set for the unique legacy of the AOH in gifting stained glass windows to Catholic churches.
These windows can be found in places as distant as Rutland, VT (St Peter’s) and Seattle, Washington (St James Cathedral); from Santa Cruz in California (Holy Cross) to Charleston, NC (St John the Baptist) and many places in between. The is a singular chapter in the story that began 140 years ago about the devotion of Irish immigrants and the expansion of the Catholic Church in America.
This story and the window legacy began not just in big cities but tracks America’s expansion West along the Lewis and Clark Trail (St Anne’s, Great Falls, MT); along the Cherokee Trail (Sacred Heart, Pueblo, CO) and along the Central Pacific Railroad from Ogden, Utah (St Joseph’s) to Sacramento (Old Cathedral).
Hibernians from Chillicothe, OH. to Roanoke, VA, to Portland, Oregon reached into their treasuries and pledged gifts and often built many of the churches. Although there were many gifts, including vestments, church bells, statues, paintings, sacred vessels and Stations of the Cross, the most enduring has been the stained glass windows.
As of May 2008, 314 windows have been recorded in thirty-four States, Ireland and Canada. The most frequent and visible link of a window to the Hibernians is the AOH reference on the window or in a church record. The themes of the windows range from an early period of images of St. Patrick, St Brigid and St. Columba and floral designs (St Malachy’s, Clontarf, MN and St Paul’s, W. Warren, MA) with Celtic harp symbols to the 1880s and later when newer windows with scenes from scripture, like Jesus washing the feet of the disciples (Immaculate Conception, Albany NY) or depicting Catholic doctrine, like the Assumption of the Blessed Virgin Mary, were more frequent.
Each window in its own way reveals the heartfelt response, generosity and faith of our singular organization. The legacy of gift giving to Catholic churches the length and breadth of America, as far as we know, is unmatched by any ethnic group. It is a record of which we are justifiably proud. 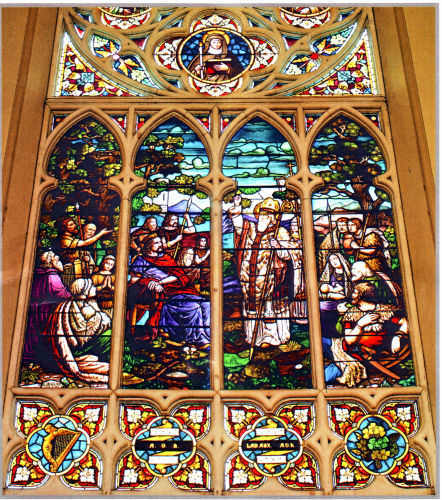 In 2005, David Yonke, religious editor of The Toledo Blade, contacted me about the Hibernian stained glass window in Historic St. Patrick’s Church in Toledo.  I advised him to contact fellow Ohio Irish American News columnist Mike Finn.  Mike had taken up the cause of looking for unknown Hibernian windows.  The resulting article: “Irish-American group seeking lost cousins” was printed in The Blade on April 9, 2005.  In the article, Deacon Thomas Carone was quoted as saying, “I walk past the massive stained-glass window in the Historic Church of St. Patrick a hundred times a day, but never noticed its glass panel inscribed with the letters ‘AOH.’”

What actually makes this window so unique is that the panel not only reads, “AOH”, but, “Lad Aux AOH.” There are very few such windows donated by the two groups, AOH and LAOH.

Don’t Forget, Send Maury maurycollins61@gmail.com) and John (jobrien@ohioianews.com) your Toledo Irish events news and pics so we can let everyone know. Deadline is 10thof the month, for the following month, so Jan 10 for February issue, etc …. 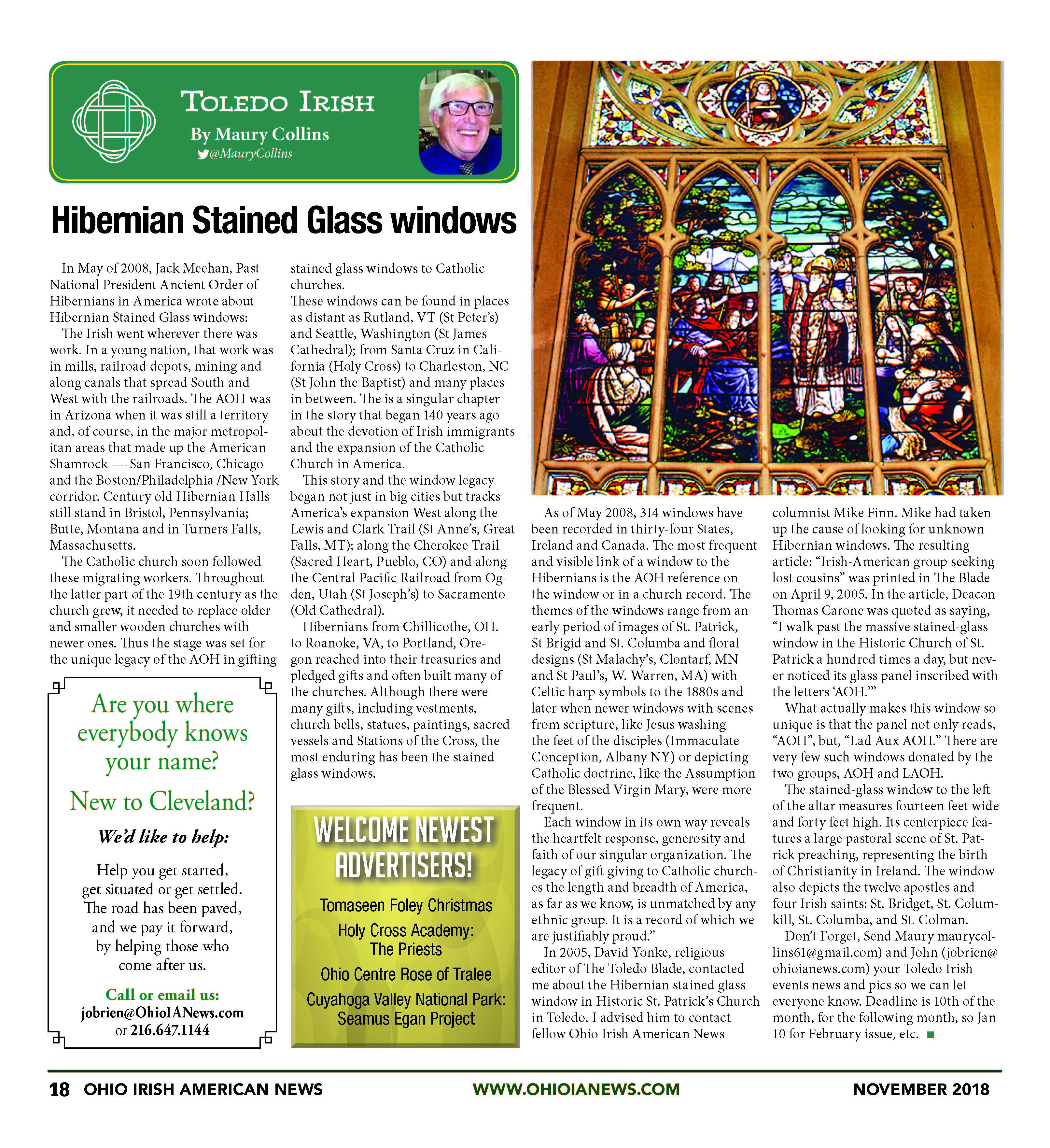 The Making of the 2019 AOH~LAOH State Convention