One hundred years ago, on November 11, the eleventh day of the eleventh month, at the 11thhour, the Great War ended. On November 11, 1919 the first Armistice Day was set as the time to remember the heroism and sacrifices of the men and women who gave their lives in the service of our country during the first World War. Many of these heroes never came home and are buried in Military Cemeteries in Europe. These graves are marked with simple crosses.

Members of the local American Legion helped to make this project a reality. The Bladensburg WWI Memorial was competed in 1926. This memorial is a large cross with the American League Seal and a bronze plaque with the inscription, “This Memorial Cross Dedicated to the Heroes of Prince George’s County who gave their lives in the Great War for the liberty of the World.”

The names of the forty-nine Fallen Heroes are listed, along with the words: Valor, Endurance, Courage, Devotion. This memorial was privately funded and was built on private property. This Cross is now on government property at the intersection of the National Defense Highway near Washington D.C. and Annapolis.

Since 1926, this Cross has been looked at as a proud symbol of the sacrifice of their local heroes. Since this Cross is on government land, there is a group that wants it taken down. The future of this Memorial Cross is in the courts and is on its way to the Supreme Court. Our history must be saved. Memorials and Monuments are under attack in our country now; we need to act so that our country’s history is not lost because of the wishes of a few.

On this Veteran’s Day, I remember many family members and friends that have served in our military. My Uncle Marty Madigan parachuted into Normandy on Day D. I never had the privilege of meeting my uncle; he was killed in a car accident shortly after the end of the war. To honor his memory, I visited Normandy in 2001. I visited the Military Cemetery and was moved by the thousands of White Crosses and Star of David’s marking the graves of these heroes.

When hearing of the possibility of the destruction of the Bladensburg Cross, I immediately thought of all these grave markers at many of our military cemeteries. Are these markers next to be destroyed? Are the Crosses at Arlington to be taken down?  Not if I can do anything to stop our Monuments, Memorials and our history being destroyed. Please visit and sign the Petition on this website www.firstliberty.org/cases/Bladensburg.

Armistice Day is now Veteran’s Day, the day we honor our veterans. In my opinion, every day is a day where we should thank our veterans and those serving in our military. Please thank a veteran, and speak up to save our Monuments, Memorials; they are our history. 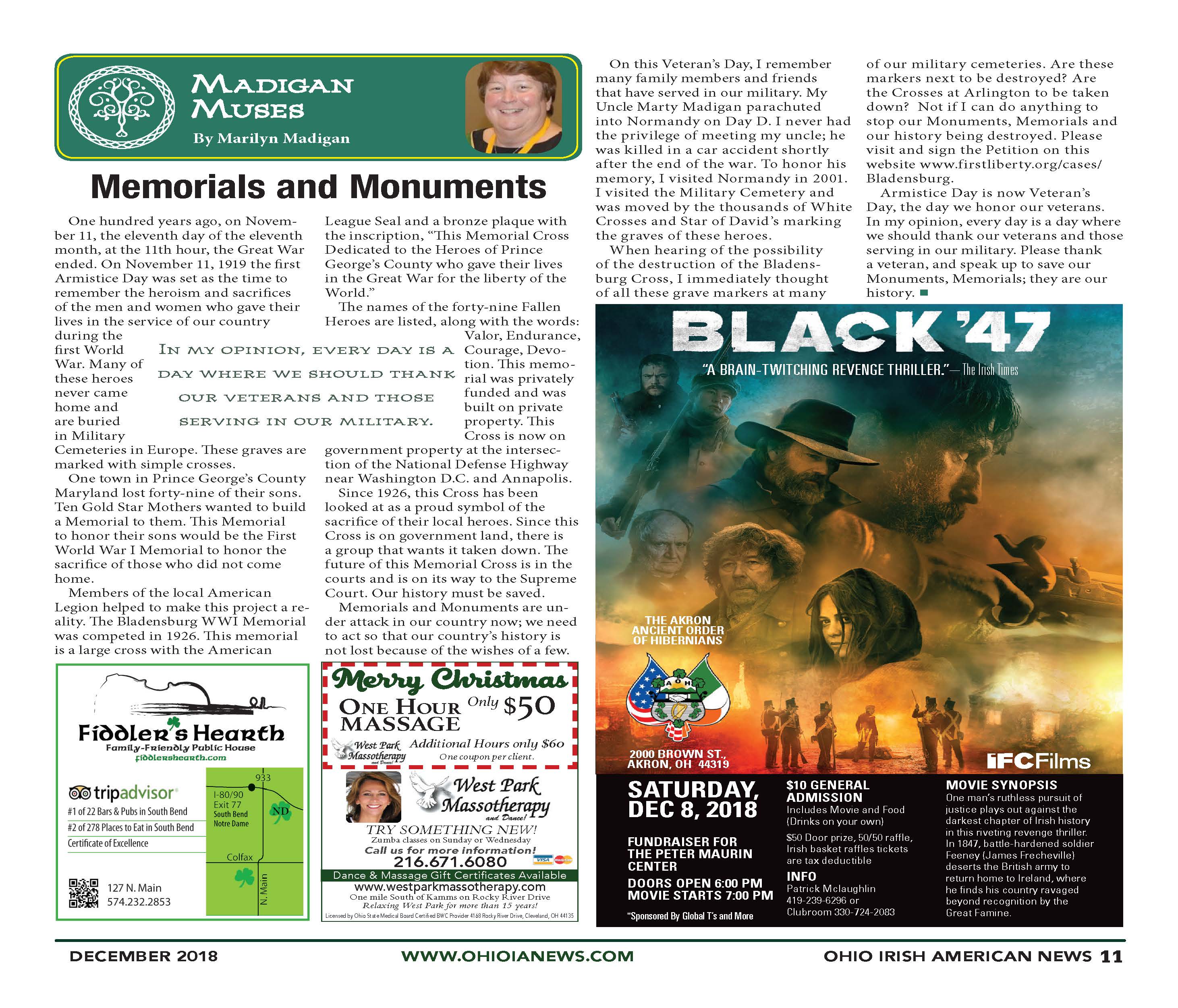 On This Day in Irish History / Coming Next Month: August