Driving down the street it was right in front of me: “The answer is trees,” exclaimed the bumper sticker. Never mind that the vehicle sporting that bumper sticker was a Davy Tree truck, because despite the fact that the company may have a mercenary disposition toward trees, it doesn’t change the fact that for many people, the answer is, increasingly, trees.

Maybe the time of year heightens our interest. The deciduous trees put on a spectacle of red, orange and yellow bright enough to make a box of crayons blush. After those trees flaunt and then unceremoniously drop their autumn colors, we transition to the evergreens, both real and artificial.

The accelerating appearance of the evergreen Christmas tree seems to flash a checkered flag signaling the beginning of all sorts of retail extravagances. Despite this use and abuse, the evergreen is essential to our winter holiday.

Symbolically, the green needles are both eternal life and the promise of spring. Placing trees in our homes for a month or so at this point of year, connects us to nature in a period when most of us spend the least time there.

Trees have eternally been important to societies, from the tree of life and Garden of Eden on through the present. With their stoic, majestic heads overseeing the short harsh lives of our ancestors, trees like the oak must have inspired a sense of mystery within those ancestral cultures. They still do.

In this context, it can come as no surprise that the superstitious, imaginative Irish worshiped some trees and dreaded others. The oak was a tree that was revered by Druids. The Trembling Ash was feared due to its leaves shaking so easily in the wind it was believed to conjure death. The birch was considered lucky to have around the home and therefore the source of many brooms, because it protected from bad spirits.

The funny thing in discussing all of these trees of Ireland, is that today, there just aren’t too many of them. Tourists in Ireland can be so enraptured with the endless undulating greens that they can forget that it is the absence of forests that enable and shape those views. Not to say that Ireland is without, but the preponderance of forestry present in Ireland today is mainly found in younger managed woods.

Why is this so? The English of course, is what I was told. They plundered the trees to build their Navy in the era of intense European Naval competition. Some of that is true, but more to the point is that the climate of Ireland changed thousands of years ago. It evolved from a more stable, dryer place into the wet climate that we are more familiar with now.

All that water and soggy land did not support complex root systems, and many trees simply fell over and died. Scientists have found and dated remains that have washed ashore in some of the more secluded harbor areas like around Achill in Mayo.

As the land became boggy and acidic, it only supported certain types of trees, like the Scotch pine. Where trees survived, the landlord system and their accompanying aesthetics, were also detrimental to native tree species. The planting and arranging of exotic managed imports were preferred to the wild indigenous trees.

Ireland’s most wooded county is Wicklow, which boasts two times more trees than any other county, and at that, is twenty percent forested. It contains a great example of the legacy of a landlord’s abundant managed forest in the gardens and estate called Powerscourt. The estate is listed by the National Geographic as the third most impressive garden in the world.

There are other areas, especially in Donegal, which have comparable larger forested areas, which were part of court estates hundreds of years ago. Both of these larger areas were planted and managed and included numerous foreign exotic trees.

The transplanted trees have thrived for the most part, which can at least partially be attributed to their isolation from their species, since this has kept them from being exposed to disease and blight which attacked trees in their native countries. The managed forests areas have also supported the regrowth of native Irish trees, where the foresters have encouraged a natural environment with groves of rowan, birch, hazel and oak.

The perceptions of trees from objects of harvest to objects of wonder in their own right, was began by a man with a Celtic soul around two hundred years ago. It took a naturalist movement led by a native Scot and all-around tree-hugger, John Muir, to significantly alter perceptions. He promoted the value of trees and nature for their own sake, more as responsive life forces and less as resources to be harvested.

“God has cared for these trees, saved them drought, disease, avalanches, and a thousand tempests and floods. But He cannot save them from fools,” is one of many quotes attributed to John Muir.

The tree appreciating movementrecently received another big boost from a German naturalist named Peter Wohlleben.  In his book, The Hidden Life of Trees, he theorizes that trees are more active participants in life their lives than we believe. He makes the case that trees use their resources to the best of their ability to manipulate outcomes that are favorable to them.

Mother trees direct sugar and nutrients to the surrounding saplings through their root connections. The nurturing is returned as trees age; they are often supported by each other through their root systems, again sharing nutrients. Trees are also capable of emitting scent signals, which warn internally of danger.

For example, when elms are aggressively nibbled by caterpillars, they secrete pheromones that attract a wasp that is a predator to the caterpillar. There is a growing body of evidence that not only do trees help each other, they attempt to help us.

It is believed that trees emit pheromones which calm people. Studies have shown that an act as simple as planting ten more trees in a community boosts the inhabitants’ overall sense of wellbeing.

Looking at my social media combined with what friends and family are doing, it is clear that interest in hiking camping and all things woods and parks is on the uptick. This is more evident in the younger adults, but I am seeing images of young and old outside, appreciating and enjoying the natural world. And why not, who doesn’t feel better after a walk in the woods? It may be that the trees are signaling us to pay attention.

“The world is full of magic things, patiently waiting for our senses to grow sharper.”
― W.B. Yeats

Lisa O’Rourke is an educator from Akron. She has a BA in English and a Master’s in Reading/Elementary Education. Lisa is a student of everything Irish, primarily Gaeilge. She runs a Gaeilge study group at the AOH/Mark Heffernan Division. She is married to Dónal and has two sons, Danny and Liam. Lisa enjoys art, reading, music, and travel. She enjoys spending time with her dog, cats and fish. Lisa can be contacted at olisa07@icloud.com.

Don’t Forget, Send Lisa (olisa07@icloud.com) and John (jobrien@ohioianews.com) your Akron area Irish events news and pics so we can let everyone know. Deadline is 10thof the month, for the following month, so Jan 10 for February issue., etc … 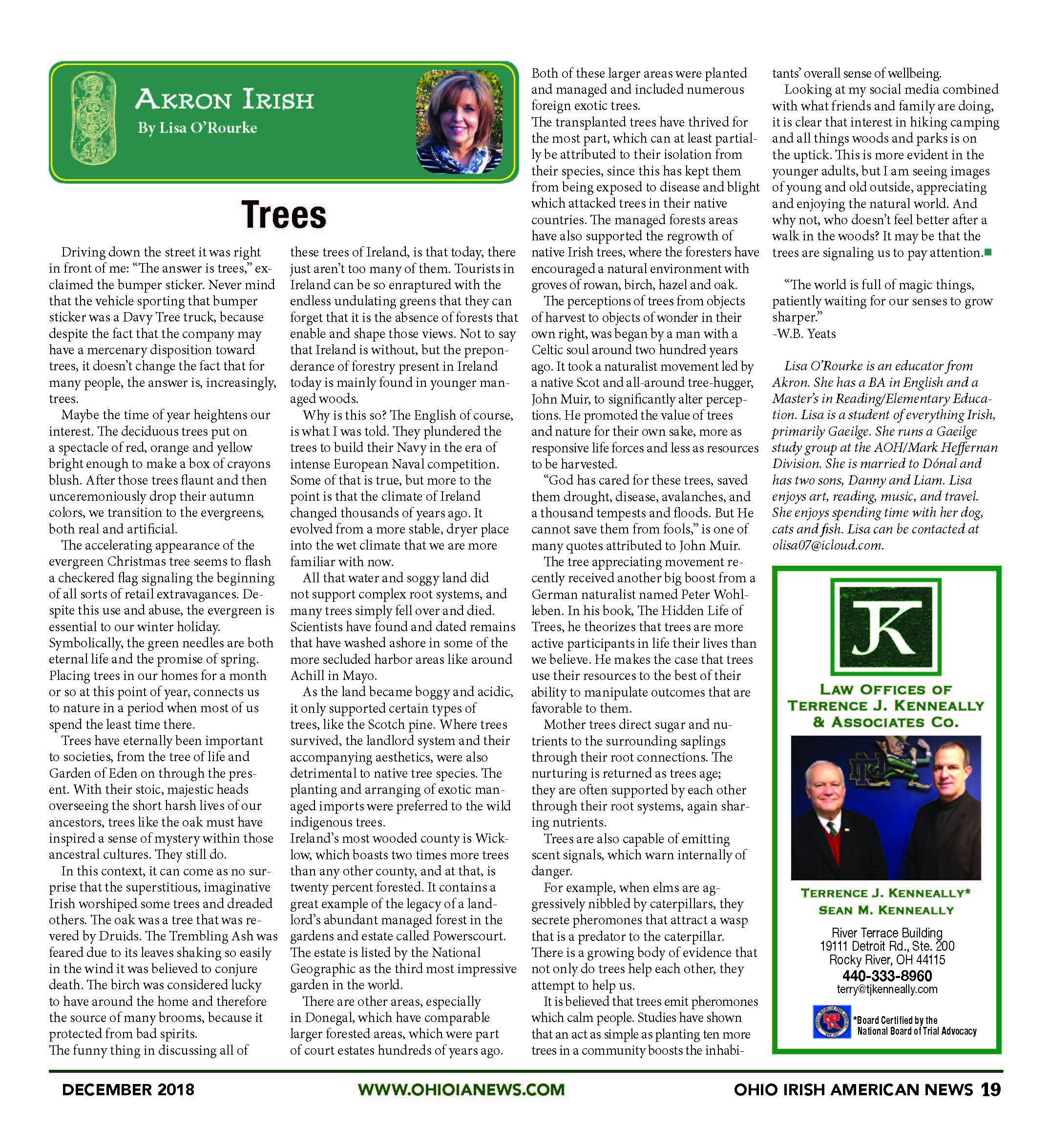 What We Do For Love