At Home Abroad: An American Tradition
By Regina Costello

I have come to enjoy and appreciate the true American Holiday that is Thanksgiving. This day of celebration was proclaimed a national holiday in 1863, by President Lincoln, as a “day of Thanksgiving and Praise” at a time when the country was in the midst of the bloody Civil War.

There is much history and controversy surrounding the birth of the holiday, the truth perhaps stems from more than one source, or perhaps a combination of all.  One source argues that the Native Americans taught the Pilgrims survival skills in a new land, and the first harvest shared by both groups was the first Thanksgiving. This of course would have occurred much earlier than 1863.

Other sources suggest that the Holiday came about as a result of 19thcentury flood of immigrants that included, Jews, Italians, Chinese, Irish and more – an environment that could quite easily become volatile.  Historians argue that the suggestion of proclaiming a national holiday that embraced all those in America seemed like a good idea to distract from the War, and to focus on life in a new world that offered new opportunity and a fresh start for many that left dire circumstances.

Associating it with the initial Pilgrims and Native American Indians seemed appealing in the efforts to celebrate the early American immigrants and the “peace” between them. A reasonable conclusion is to believe that there were many “Thanksgivings” throughout the country, over the centuries, where locals taught the newcomers survival skills.

Clearly it was a time of joyous celebration, not to mention tremendous relief, as the bounty of the harvest secured survival during the harsh infertile winters.  No doubt the wide array of dishes served in homes across this great big land during those early years, reflected both the local produce and the diversity of those who sat at the table.

This holiday, now deeply entrenched in the American tradition, is the most popular holiday of all for many.  It is the busiest travel time of the year because it is an occasion that brings families together to take a pause from life and bathe in each others’ company while tucking into a traditional feast.

While my husband and I do not have family in these parts, we are blessed to have crossed paths with many people who remain close to our hearts, with whom we have celebrated the Holiday over the years. Immigrant residents and fellows that passed through the unit where my husband works were frequently invited to our home. 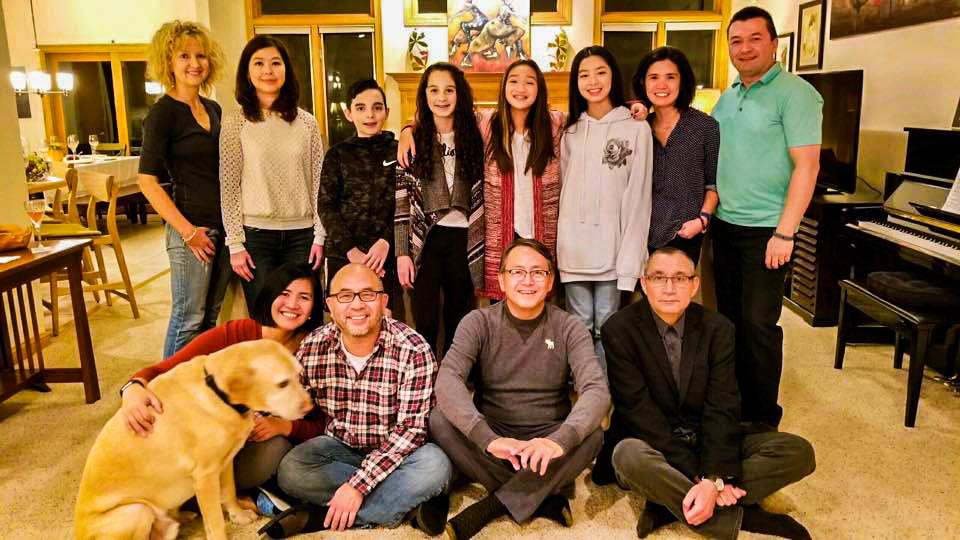 Irish friends, like our long-time pal Louis Finucane, often sat at our Thanksgiving table.  Michael and Laura Taylor also joined us with their kids. They now reside in Michael’s home town of Geelong, near Melbourne in Australia.  I truly hope we will see another Thanksgiving with them.  Wonderful neighbors in Lakewood, Charles and Mary Bill, welcomed us into their home for the celebrations for a number of years.

Upon moving to Broadview Heights, our circle of friends continues to grow, and has expanded further with career changes and with our children now well advanced in school.  These past years have resulted in a new Thanksgiving tradition for our family.

Good friends host the event, and the guests provide a wide array of goods.  All present are first generation immigrants from three continents.   We share our ethnicity with traditional dishes that reflect out home palates.   Our diversity is reflected in conversation.

I like to think that our bountiful table is somewhat reflective of those earlier Thanksgivings – turkey, sweet potatoes, corn bread, sided with Chinese Fish Soup, Sisig (Filipino sizzling pork), Irish Colcannon, Samosa (spicy vegetarian pastries) and all the trimmings. Treats brought back from trips overseas are served with hot coffee.

As dusk arrives, we relax and play mystery games over glasses of wine and enjoy entertainment from the children present. Our pets enjoy the day with us.  Ashley and Selina – wheaten terrier sisters – play like puppies should, while Mamo, a mature lovable Labrador, looks on.   I am grateful and thankful for our joyful Thanksgiving Holiday and the fond memories that are often reflected upon.

*Regina is a Graduate from the National University of Ireland, Galway and a Post Graduate from the National University of Ireland, Dublin.  She is the former Curator of the Irish American Archives at the Western Reserve Historical Society, former Executive Director of the Soldiers’ and Sailors’ Monument Commission and former Executive Coordinator of the Northern Ohio Rose Centre. She serves on the Board of Directors of the Mayo Society of Greater Cleveland.  She can be reached at rcostello@ameritech.net.

At Home Abroad: East & West in The House: The White House