Blowin In: “A Tale for Christmas”
By Susan Mangan

“Saints above preserve us and me wee knees,” lamented young Paddy Corrigan as he and his twin brother Petey pulled a multitude of blackberries off the autumn vines that traipsed across every stone wall and rusted fence in Ireland.

“Sure, it isn’t even the Feast of All Saints and Mammy is already thinkin’ about bakin’ her brandy soaked Christmas cake,” complained Paddy.

“May St. Francis’ donkey help me, but sure don’t I have enough to worry about come Christmastide. Missus Honor is already making me practice the Wexford Carol for me annual solo at the midnight mass on Christmas Eve,” moaned Petey. “After five years of singin’ that sainted carol, ach, since I was a laddie of 5, don’t I yet know the tune?”

“Aw, stop your belly itchin’ Petey.  And don’t even start on the laringiropus that plagues your vocal ropes by the last day of November. A wee biteen of crisp autumn air helps clear the lungs. Me knees, now, are a different story.”

Every year the good ladies of Rock Strand host a Christmas fete displaying their handmade lace and woven baskets. The bakers of the village offer clove studded mincemeat pies and sausage rolls.

Only a brave few of the ladies, however, has ever thought to intrude upon the baking expertise of the Widow Margaret’s famous currant buns or the Widow Bernadette’s sugared blackberry scones, except of course Petey and Paddy’s Mam, Maeve. Now, Maeve learned the art of baking and cookery from her neighbor Niamh Fallon. The legend of Niamh’s spiced barm brack floats like a melody amid the chattering ladies of the surrounding villages. Out of the kindness of Niamh’s large heart, she offered a tip or three to her neighbor Maeve.

“Before the harvest moon rises Maeve, ye must begin your Christmas cake,” whispered Niamh to an eager Maeve Corrigan.

And so it was that Paddy and Petey Corrigan were sent out to the autumn fields in search of lush blackberries, the secret ingredient in their mammy’s Christmas cake.  Soon the blackberries would be laid in muslin tea towels to dry in the deep white-washed window ledges of the Corrigan cottage.

Maeve was not the only baker to begin Christmas preparations before the Samhain moon rose full yellow in the night sky. Throughout town and meadow, the women of Rock Strand collected rosehips for tea cakes and sage from their kitchen gardens to dry for savory scones and meat bridies. In a fleeting whisper, autumn flew like sea birds in flight, and the Christmas season soon descended upon the villagers of Rock Strand.

“Yes, yes Father on my way to ye’, sure I am,” called Father Francis with his old collie Wren nipping at his polished heels.

“At, at your service Father,” chimed Francis as he came to a sudden stop before running into the great girth of Father Colm.

“Francis, to raise money for Mrs. Honor’s annual school choir tour, I am going to decree a contest during this year’s Christmas fete. The fine ladies of the village may submit bakery to be judged by our esteemed panel of tasters, you and me, for a donation of five pounds per entry. By the last chime of the evening bell, I want you to post flyers in every butcher, baker, and candlestick maker between Rock Strand and Bally Lough.”

“Tis’ a remarkable idea Father Colm, and sure won’t we be the winners gettin’ to taste all the Christmas treats,” beamed Father Francis.

“Ye are as bright as the star of Bethlehem! That was my thought exactly,” laughed Father Colm.

“Ladies, ladies back away from the window! My newest shipment of sausages will soon be arrivn’ and Moran will be bringin’ a rake of young geese for yer Christmas dinner,” shouted Butcher Keane, as he threw marrow bones to the host of village dogs that wandered freely from house to house.

All the women were surrounding Father Francis as he posted the flyer in the main window of Keane’s Butchers. Jostling grocery bags, Maeve Corrigan and Niamh Fallon read the contest decree with great interest.

“Sure Niamh, you’re a shoe in to win with all the fine bakin’ that comes from your hearth, but my brandied Christmas cake might get a nod or two as well, sure don’t ye think?” whispered Maeve to her neighbor Niamh.

The Widows Margaret and Bernadette were well known to be great competitors, but didn’t always possess a Christian heart toward each other’s talents. Silently, the two older ladies read the post with quiet enthusiasm and fierce confidence. “Hmm, without a doubt I will win the Christmas ribbon at this year’s fete,” each widow silently mused.

Throughout the crisp December days and nights, warm fragrances of nutmeg and cloves, orange and sage, brandy and port wafted from the windows of the modest cottages of Rock Strand. Aproned wives and widows, bustled about their Aga ovens creating all sorts of country delicacies in preparation for the Christmas fete.

“Paddy and Petey, ye two gossers come to me right now! I must pop over to the specialty store in Bally Lough to collect marzipan flowers to top my Christmas cake. Doesn’t the judging start at noon today and it is already 9am. Don’t ye dare let yer spaniel Blarney into this kitchen. He’d devour me cake in a single breath!” warned Maeve.

“Promise Mammy,” Paddy and Petey cried in unison, but it was well known that the twins could never keep a promise.

“May the heavenly Virgin protect us, but I swear Paddy, I never saw Wren, Widow Margaret’s spaniel Fly, and our own Blarney playing in the yard. I simply went out to breathe some fresh air, like ye told me to do, Paddy, when I needed to clear out me lungs before I start my practicing of the Wexford Carol,” cried Petey. “Sure, didn’t the dogs smell the beauty of Mammy’s cookery and ate the Royal frosting and half the cake!”

“Baby Jesus forgive me, but, Jaysus, what are we to do?” lamented Paddy.

“I have a plan Paddy, but we will have to tell Mammy a wee lie. Saints forgive us,” said Petey. Using his best penmanship, Petey wrote a letter to his Mammy.

Paddy and me are practicin’ Christmas charity and thought we’d bring the cake to St. Patrick’s hall. Meet us there with the merry-go-pan flowers. Your best boys, P and P.”

With that, the twins carefully placed the half-eaten Christmas cake in a basket and brought it to the church hall where Father Francis was setting up for the day’s fete. Little did the boys know, but cake crumbs fell like a trail of fairy dust all the way to church. Meanwhile, as the Magi were drawn to the star in the East, the three dogs, Wren, Blarney, and Fly were more than happy to lap up the unexpected treat, straight past the nativity scene and into the church hall.

“Now Petey, what is the next step in the plan. The cake is here, but unlike the loaves and the fishes, it has yet to multiply!” Paddy cried.

“All the Mammies have brought their Christmas treats and sure not one is a Christmas cake! Our Mammy is sure to win! Let’s sneak into the Widow Margaret’s church kitchen. Surely, she has some freshly churned butter that looks like Royal frosting,” Petey suggested. “And with the merry-go-pan flowers, no one will ever be the wiser.”

Father Colm’s housekeeper, Widow Margaret, planned to serve a surprise dessert to the priests after their dinner on Christmas day. Her biggest surprise, however, was to be her fete entry – a brandied Christmas cake. Between the butter needed for the turnip mash and leftover frosting from the cake, the twins found more than enough frosting with which to plaster their Mam’s cake.

Meanwhile, the trio of canine Magi found their way to a heavenly place filled not with stars, but with Christmas treats. By the time the twins arrived with the butter and leftover frosting plaster, the dogs had devoured every entry in sight and lay asleep, with full bellies and visions of sugar plums.

“Now we’re done for Petey. Mammy will soon be here with the merry-go-pan and see ne’er a cake on which to place it!” cried Paddy.

“Lads!! What is this mess, and why are the dogs asleep on beds of drool?” cried Widow Margaret as she rushed into the church hall.

As the twins told her their sorry tale, Widow Bernadette entered with her fete entry, yet another Christmas cake.

“Widow Bernadette, it is time to put our past behind and help the twins. They have found themselves in quite a pickle,” explained Widow Margaret.

Maeve Corrigan finally arrived with her parcel of marzipan to place on what she hoped would be the winning entry. After all, it was for the good of the children’s choir. To her great surprise, hers was to be the only entry.

Noon arrived and the ladies of the village, Petey and Paddy, and the now lively dogs crowded around the beautiful Christmas cake, wondering how Father Colm and Father Francis managed to eat up all the other entries. Meanwhile, Father Colm and Father Francis were puzzled over the great stash of entry money, but ne’er a dessert in sight, except for the glorious, marzipan bedecked Christmas cake.

And so, Maeve Corrigan won the grand Christmas ribbon for her brandied cake and slices were offered to all present. As Maeve bit into her dessert, she marveled at the delicious confection, but wondered why she couldn’t taste any autumn blackberries. With a wink between the two widows, Petey Corrigan began to sing the Wexford Carol for all the good ladies of Rock Strand. 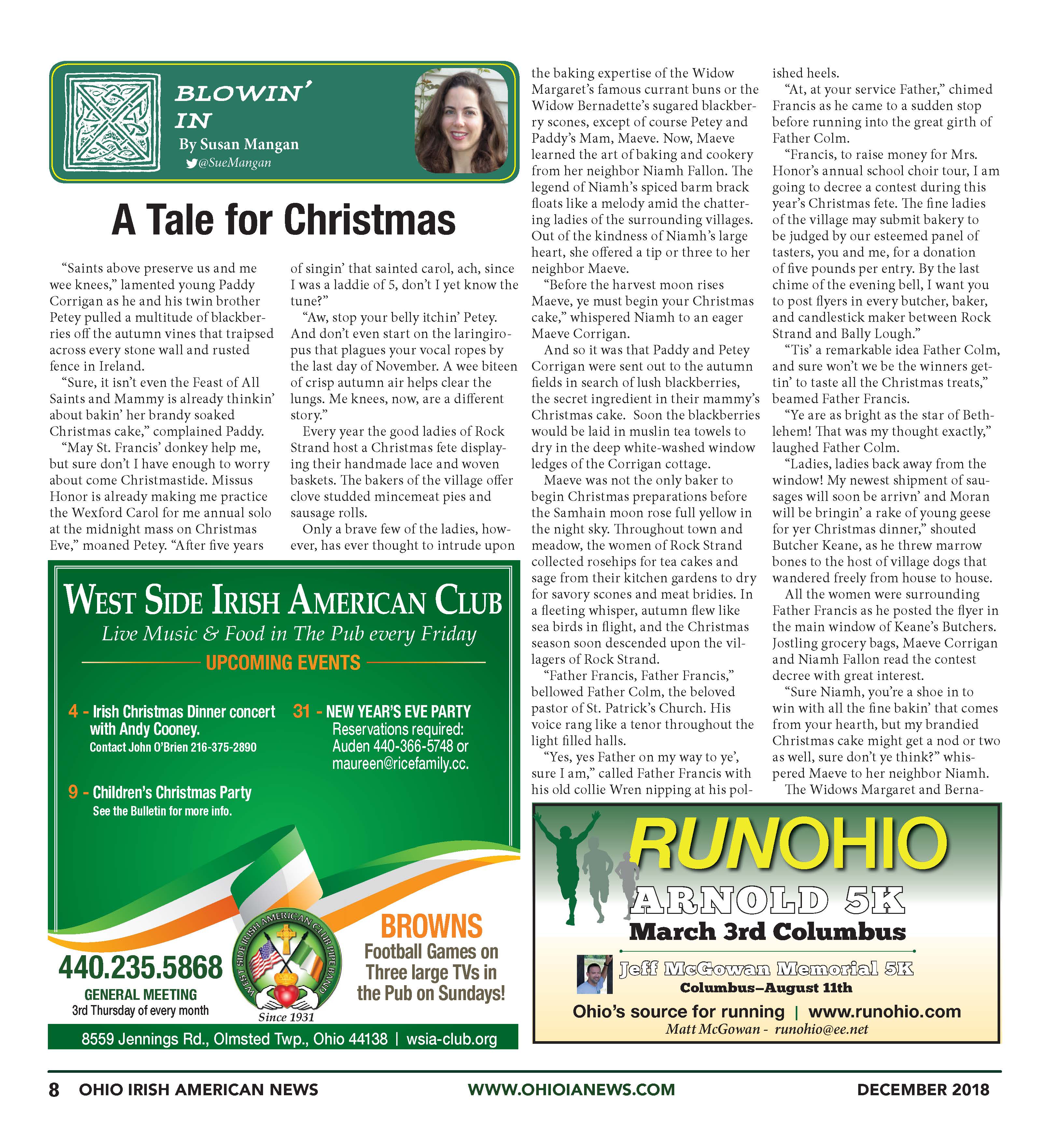 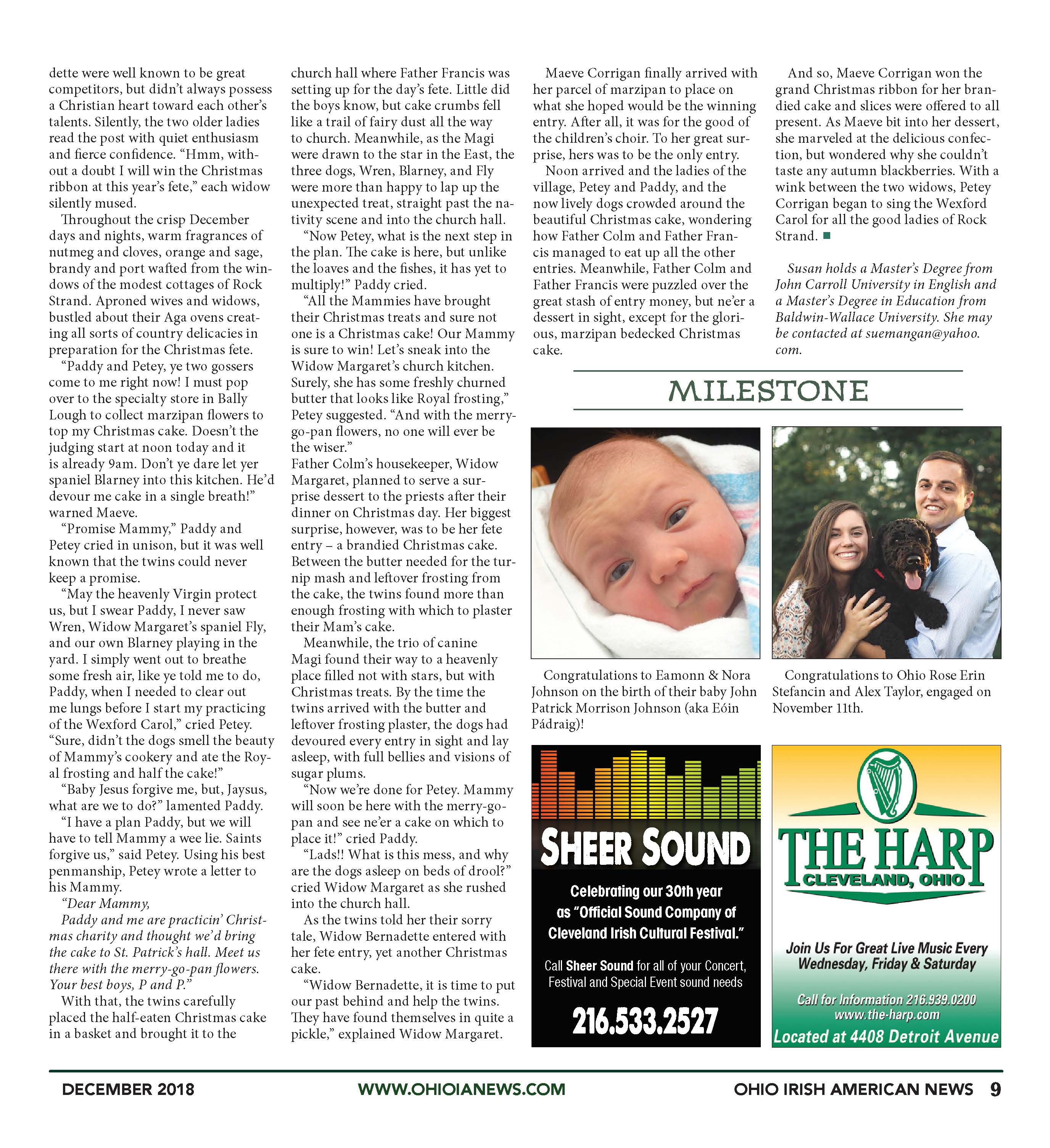 Madigan Muses: Freedom for All Ireland