“In one sense, substantially all the white inhabitants within the present United States were at one time foreigners. But in the days when the population was mainly recruited by immigration, the word ‘foreigner’ was never applied to an Englishman.” (Harper’s Magazine, 1875)

The previous two Cleveland Irish columns shared the public discourse of Mary Rowland and Bishop Gilmour.  That discourse on the role of women and the role of non-Irish in the pursuit of Irish freedom was illustrative of social and demographic changes in Cleveland and the United States.  In 1880 the US was experiencing the astonishing readiness with which its citizens relocated, under the “smallest economic or social impulse.”

A recorded 9,598,106 Americans were living in states and territories other than those of their birth.  Interestingly enough, interstate migration was primarily westward along the same parallels of latitude.  Since the first census, there were 3,302,650 Ohioans living in other states and 2,808,119 Americans living in Ohio who were born in another state: 1,401,890 male and 1,401,229 female.  Ohio ranked third nationally in those categories.

The largest percentages of Ohio inhabitants not born in the state were people from Pennsylvania, New York, Virginia, Kentucky and Indiana. Where did Ohioans go?

Proportionally, there were also more native-born citizens than foreign born citizens, reversing a thirty-year trend. As America became more American born, so did the census data.  “It is not incorrect to speak of a child of German parents, perhaps himself speaking the German language and living in a community almost exclusively of that nationality, as a German.  But this is not the point of view of the census law. Children born on the soil of United States are known and ranked as Americans.”  That point was made by the Census Bureau for the 10thUS Census in 1880.

Cleveland was 9thin total foreign-born populace and percentage of foreign-born.  We were 11thin total population in the continental United States.  Cincinnati was 8thin total and 8thin foreign, but 25thin foreign relative to native.

New York, Philadelphia, Brooklyn, and Boston maintained the highest percentage of Irish born, respectively.  New York City had 198,595 inhabitants born in Ireland. However, as a result of the Midwest population increase, Chicago rose to 5thon the list of Irish born residents and cities like Cleveland, Pittsburgh and Cincinnati all welcomed considerable numbers of foreign-born citizens.

The states with the highest Irish populations were, in order: New York, Pennsylvania, Massachusetts, Illinois, New Jersey and Ohio. That being said, a brief computation also serves to show that a line drawn north and south through Pittsburgh will leave one-third of the Germans and two-thirds of the Irish to the eastward side of the line, two-thirds of the Germans and one-third of the Irish to the westward side.  In 1870 the Irish were the largest immigrant group, 5% of the total population and a third of all immigrants.  In 1880 the Germans were the largest immigrant group.  889,345 of the 1,854,571 Irish-born Americans lived in the largest 50 cities.  In Ohio that meant Cleveland and Cincinnati.

Ohio did not adhere to all the standard data analytics. The percentage of males in Ohio increased since the 1870 census. The percentage of native-born decreased 2,157 per 100,000 in the last ten years as well, to 14,089.  Ohio was more male and more foreign than the population as a whole.

The census notes that in states where the “foreign element” was the largest, the general causality is apparent.  The Northeast had immigrants in manufacturing and mining areas, mostly Irish, German and French Canadians.  In the Northwest, agriculture was the principle moving force and immigration was mostly German and Scandinavian.

“Settled” populations had an equal balance of males and females, while the west and southern states had more males due to industry.  Those were their generalizations, but it would appear that in 1880 immigrant populations followed economic opportunity and availability.

Clevelanders both native and foreign-born had housing. The city had 27,181 dwellings and an average of 5.89 persons per dwelling.

To extrapolate, there were 2,797 single people in Cleveland in 1880.  Cincinnati was inhabited by 52,025 families with 4.80 people per family.  Cincy’s population in 1880 was over 100,000 more than Cleveland.  Mary Rowland and Bishop Gilmour disagreed on the role of women and the role of non-Irish in movements for Irish freedom.  That debate occurred in a Cleveland whose native population was more transient and whose immigration percentage was higher than the national average.  It was family dominant, and Cleveland families lived in more single-family dwellings than families in other US cities.

As illustrated last month, single Irish women inhabited the hotels and boarding houses downtown and worked as servants. They were atypical in 1880 census data analytics.

*Francis McGarry holds undergraduate degrees from Indiana University in Anthropology, Education and History and a Masters in Social Science from the University of Chicago.  He is an assistant principal and history teacher.  Francis is a past president of the Irish American Club East Side.  He is the founder and past president of the Bluestone Division of the Ancient Order of Hibernians. 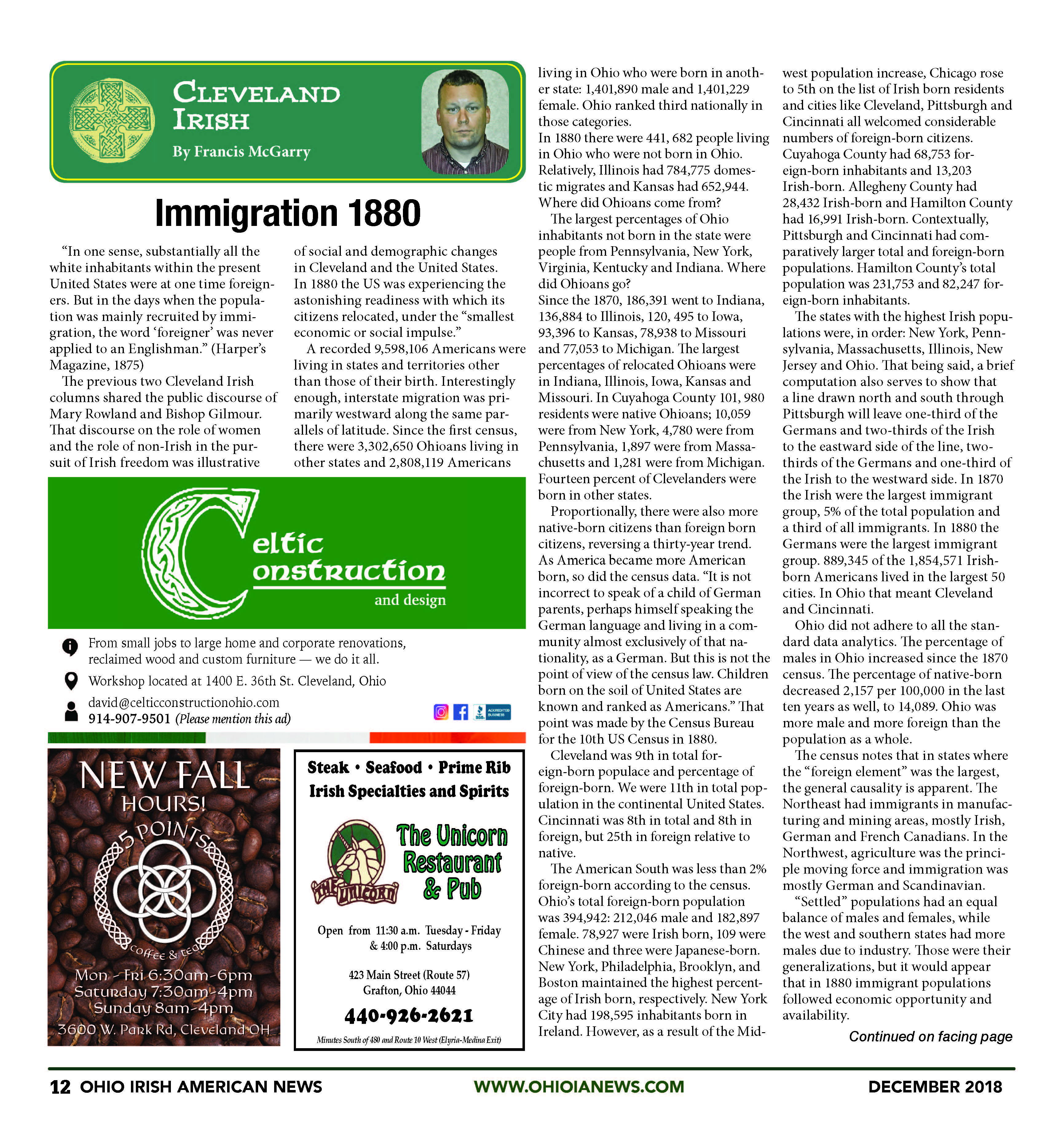