Writers who have examined the palpable phenomenon of the tenacity of Irish Americans to tenaciously adhere to their identity, even a century or more from the diaspora, have come to different conclusions as to why. Some have asserted that it is driven by the still unfulfilled political desire for a united Ireland; others suggest that it is the result of growing up in families where Irish culture is celebrated and transmitted. 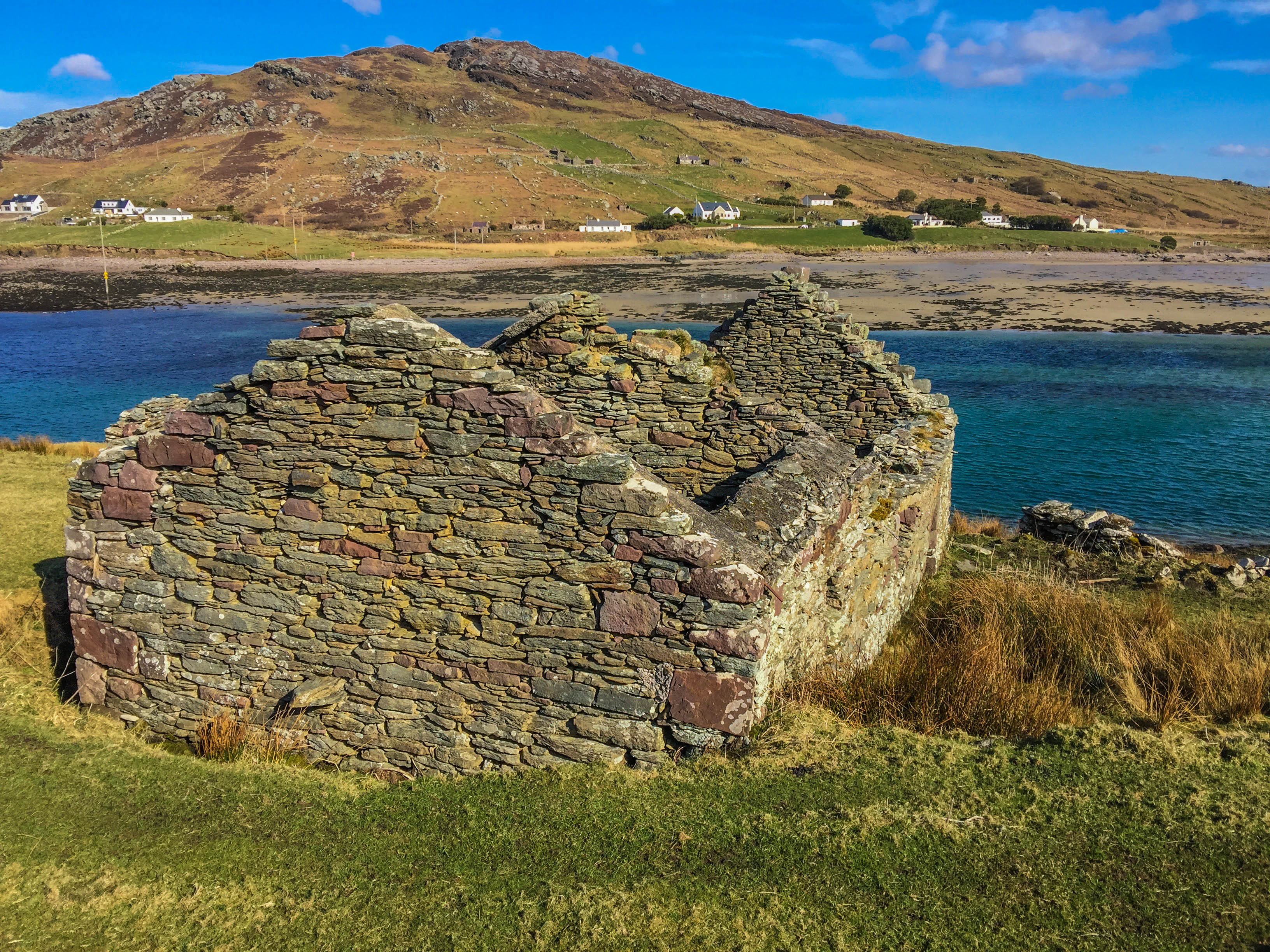 In the case of Cuyahoga County 8th District Court of Appeals Judge Sean Gallagher, both motivators apply: his Irish born parents supplied the Irish culture, and Sean is a strong historian by avocation in his own right of The Republic of Ireland.

The story of Sean’s parents is a familiar one. His dad, John Francis Gallagher, one of eleven children born to Patrick and Mary Gallagher (nee Gallagher) emigrated to Cleveland in 1930 from Achill Beg (“little Achill”) a small Island off of Achill. It was accessible only by currach and lacked peat, which had to be imported, populated primarily by Kilbanes, Corrigans and Gallaghers.

Sean’s Mom, Margaret Theresa, nee Casey (“Peg”), from the village of Tuofist, County Kerry, initially emigrated to Westminster and spent the war surviving German bombs in London. Then, in reminiscent of the Saorise Ronan film Brooklyn, Peg came to the U.S. and lived with her two sisters in New York. She later learned of a large Irish presence in Cleveland. Like so many of that generation, John and Peg met at the West Side IA, married in 1950, and had two sons: Dan in 1951, and Sean in 1955.

The boys attended school at St. Phillip and James, then lead by the larger-than-life Fr. James O’Brien, and were taught by the Franciscan nuns. Both attended St. Edward High School. Sean obtained a B.A. from Ohio University and his J.D. from Cleveland Marshall School of Law.

Sean’s attraction to public life began while working one summer as a janitor at Juvenile Court. He used the opportunity to observe judges, lawyers and police perform their duties, and later became a Juvenile Probation Officer. Judge Don Nugent hired Sean as a personal bailiff. He later was elected to the Cleveland Municipal Court and served as President of the Northern Ohio Municipal Court Judges Association from 2001-2002.

John Francis Gallagher worked in the trades his whole life; he and his wife were active in the IA, his mom having a particular interest in the library there. “Growing up in an Irish family was “empowering—growing up after WWII in a new country, my parents taught us that you have a whole fresh landscape in front of you,” Sean remembers.

Sean has painted that landscape with solid accomplishment. He worked in the white-collar division of the County Prosecutor’s Office, worked with underprivileged kids at the Metzenbaum Center and incarcerated youth at Hudson.

Sean Gallagher was named the Legal Eagle Man of the Year from St. Edward High School, and was the Outstanding Alumni from Cleveland Marshall in 2007. Sean celebrates his heritage in enjoying dual citizenship in the US and the Irish Republic, in his long membership in the IA, and in authoring a history of the IA, titled, “Volunteers: 75 Years of the West Side Irish American Club.” He and his wife, Dawn, have a son, Fergus, who studies now at Cleveland Marshall. 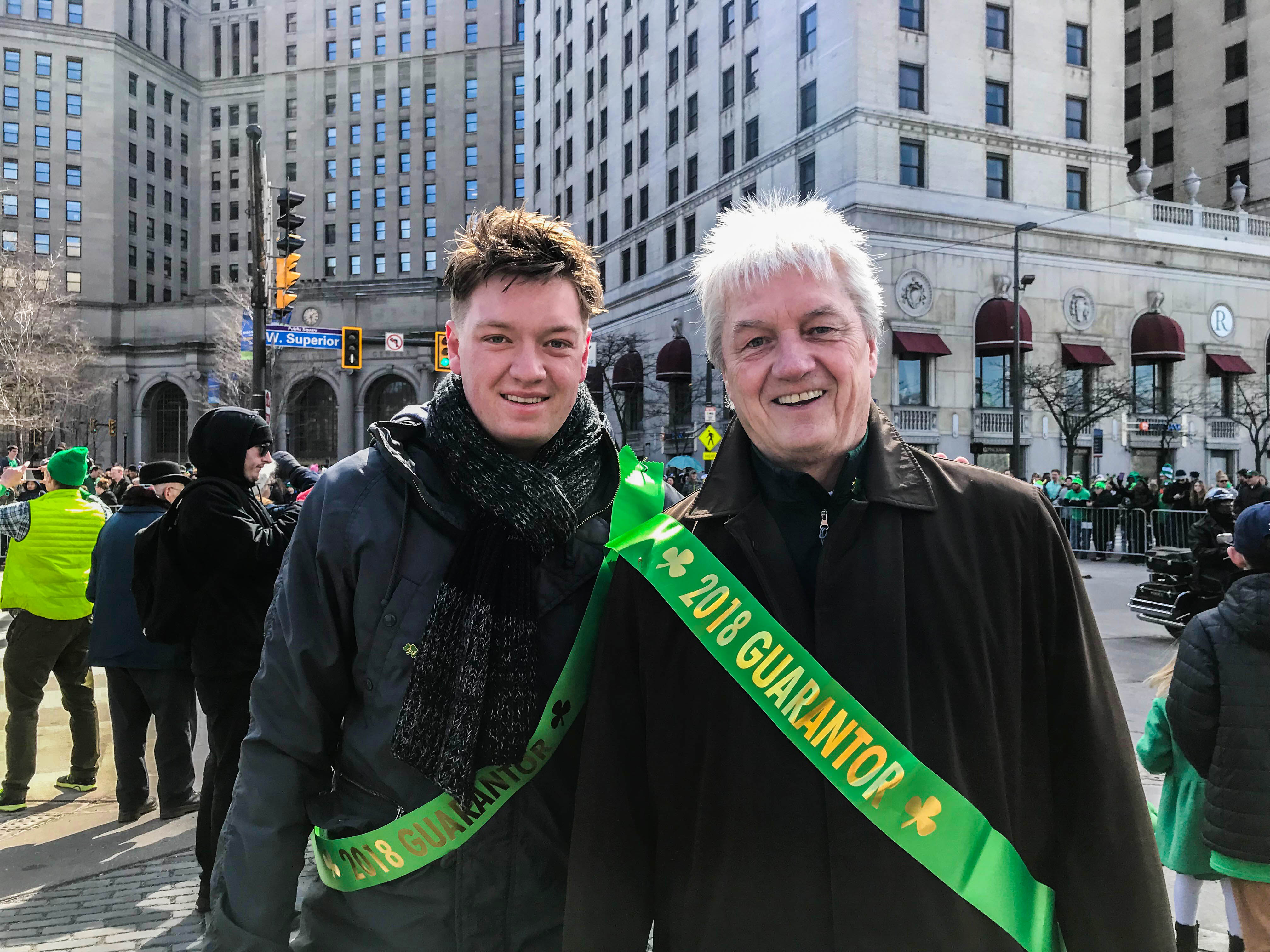 Sean Gallagher has richly painted the landscape John and Peg opened for him.

*Ken Callahan is a retired Common Pleas Judge and a partner at Collins and Scanlon. He is on the boards of Irish Archives and Irish American Law Society. He can be contacted at kcallahan@collins-scanlon.com. 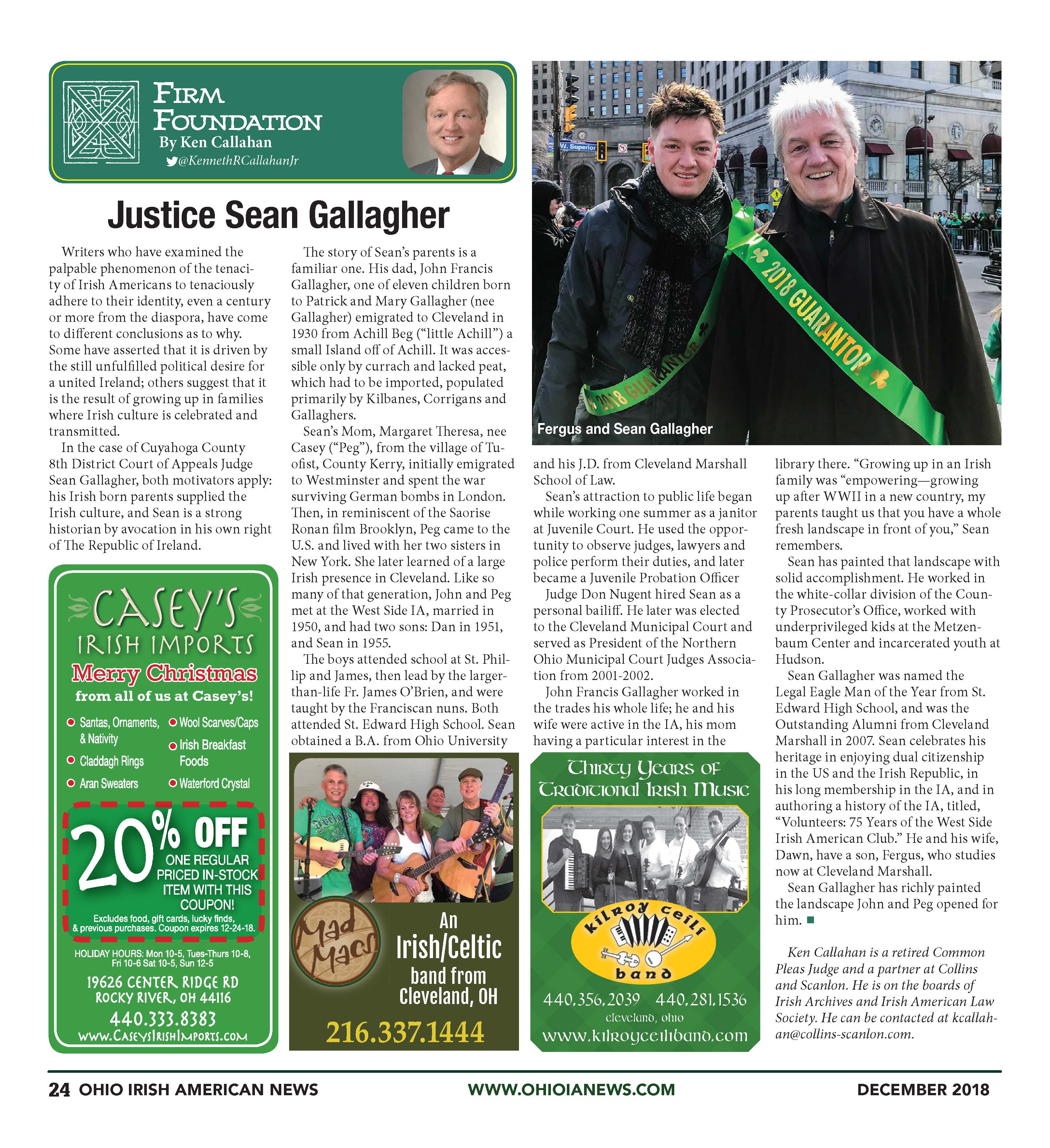