Coolavin Barony is located in the southern portion of County Sligo.  Most of the barony is part of the Catholic Diocese of Achonry (pronounced: ach-on-ree).  The patroness of the Achonry Diocese is St. Attracta.  Her story is very important to the people of south Sligo, where her memory and traditions are kept almost 1,500 years after her death.

Attracta was born in Coolavin Barony around 420 A.D.  She was the daughter of Talan, who was a local chieftain. During her younger years, she was most often in prayer, she gave alms to the poor frequently, and she was often fasting.  Her father wanted her to marry as she had many suitors after her hand; however, this is not what Attracta wanted to do.  She felt a divine inspiration to embrace a religious life.  Attracta left home against her father’s wishes to become a Christian religious.

According to legend, she sought out St. Patrick, who was in the area, and was consecrated by him. While St. Patrick was in the process of consecrating Attracta, a veil fell from heaven and landed on St. Patrick.

He received it with great devotion, and presented it to Attracta. But, in her humility, Attracta said to the saint, “Since this good and perfect gift has descended from the Father of Light, I do not consider it intended for me, a sinner yet, in my opinion, you who have received it should retain it, or present it to someone who is more holy than I am.”

St. Patrick then placed the veil upon her head, and, he told Attracta, she should wear it, until her death.  Attracta yielded to his request, and wore that veil, until the day of her death. 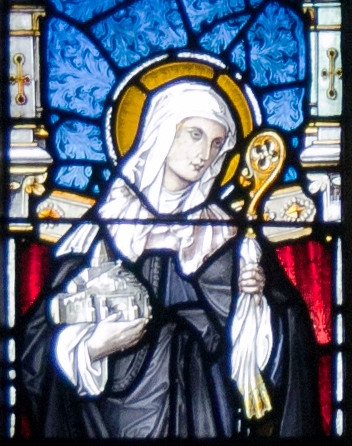 St. Patrick then established a convent near Lough Gara in Sligo.  He appointed St. Attracta to rule over it as Abbess, some other pious women joined her in the convent. Hence, in due course of time this locality took the designation of Cill Athracta, or, in English, the Church of Attracta. The area is known today as Killaraght, the English corruption of the Irish name.

St. Attracta founded another convent in Roscommon and a hospice for travelers near Lough Gara, which was active until 1539 A.D.  She wanted to found a place where travelers from all over could find warm hospitality. In those days there were no paved roads and travelling was difficult. As Attracta was known for her healing ability, this place also became a hospital.

There are many stories and legends about Attracta that have been handed down through the ages.  Like the stories of St. Patrick, it is often difficult to know which stories are factual.

The King of Connacht carried away some hostages from the nearby barony of Leyney, and held them as prisoner in his castle.  Soon their friends were able to free them, but the King of Connacht and his troops followed them and came upon them at Killaraght, surrounded them, leaving no room to escape, except through the lake.

Attracta, who lived in her convent on the shore of Lough Gara, came to their rescue by opening a passage for them through the waters of Lough Gara.  Immediately the waters of the lake divided and the people of Leyney marched through to the opposite shore.

Another tale that is popular in the area also concerns the people of Leyney, who were harassed by a ferocious wild beast ravaging the country around the parish of Kilmacteige. The people requested the help of Attracta to rid the inhabitants of this beast. One version records that she killed the animal with her staff. Another version is that Attracta killed the monster that was half dragon-half bear, with her own hands.

Yet another story is that her brother St. Conallus had a church at Drumconnell, near the town of Boyle.  Attracta contacted him about building a convent near his church. Conallus apparently had a vision regarding his sister’s future fame and figured that her fame might cause conflicts with his own interests.

Conallus asked her “In the name of God,” not to build on his land.  Attracta replied with a curse, “Since you ask me in the name of God, I cannot refuse. And since you order me to leave your lands, I will obey.  But, that Conallus may feel how bitter is my sentence; I pray that no corn may ever grow on his estate, and that no father and son together may ever serve there.
“I foretell that a sound of bells will come into your dwelling, which will diminish the offerings you receive from the people,or deprive you of them altogether.”

According to the story, these things did happen.  Soon a monastery was built on his land and it took away all of the donations which had previously supported Conallus’ church.

The strength of the veneration in which Attracta has been held for fourteen centuries is illustrated by the act of Pope Pius IX in 1864 when he authorized the Office and Mass of St. Attracta on her feast day (August 11). It was very significant that the Pope chose to honor an Irish Saint and indicates the strength of the devotion to St. Attracta, at that time.

There are at least seven holy wells named after St. Attracta in the west of Ireland and they are visited regularly.  The most famous of the wells is located near the County Sligo village of Monasteraden on the road to Ballaghaderreen. The circular well is enclosed by three walls.  In the middle of the well there is a large carving of Jesus on the cross (known locally as the Clogher Cross). Irriel O’Gara (Lord of Coolavin and one of the patrons of the Four Masters) is said to have commissioned this to be carved in 1668.

On the feast day of St. Attracta, hundreds of pilgrims visit the holy wells and say Rosaries and perform the Stations of the Cross. When they go to the wells first they take off their shoes and say three rosaries while walking round the well. There is a mug left beside the well and each time you pass they take three small sips from the cup.

After the ceremonies at the well, a pattern is held nearby. The word pattern is derived from the Irish word Patrunor English Patron. Most Irish parishes have a patron saint. On the saint’s feast day, the pattern included horse and donkey races, tug-o-war competitions, and food is served and enjoyed by the pilgrims.

St. Attracta is the chief patron of the area in and surrounding Coolavin Barony to his day.  Her memory and traditions are preserved by the people and many location names in the area which bear her name. 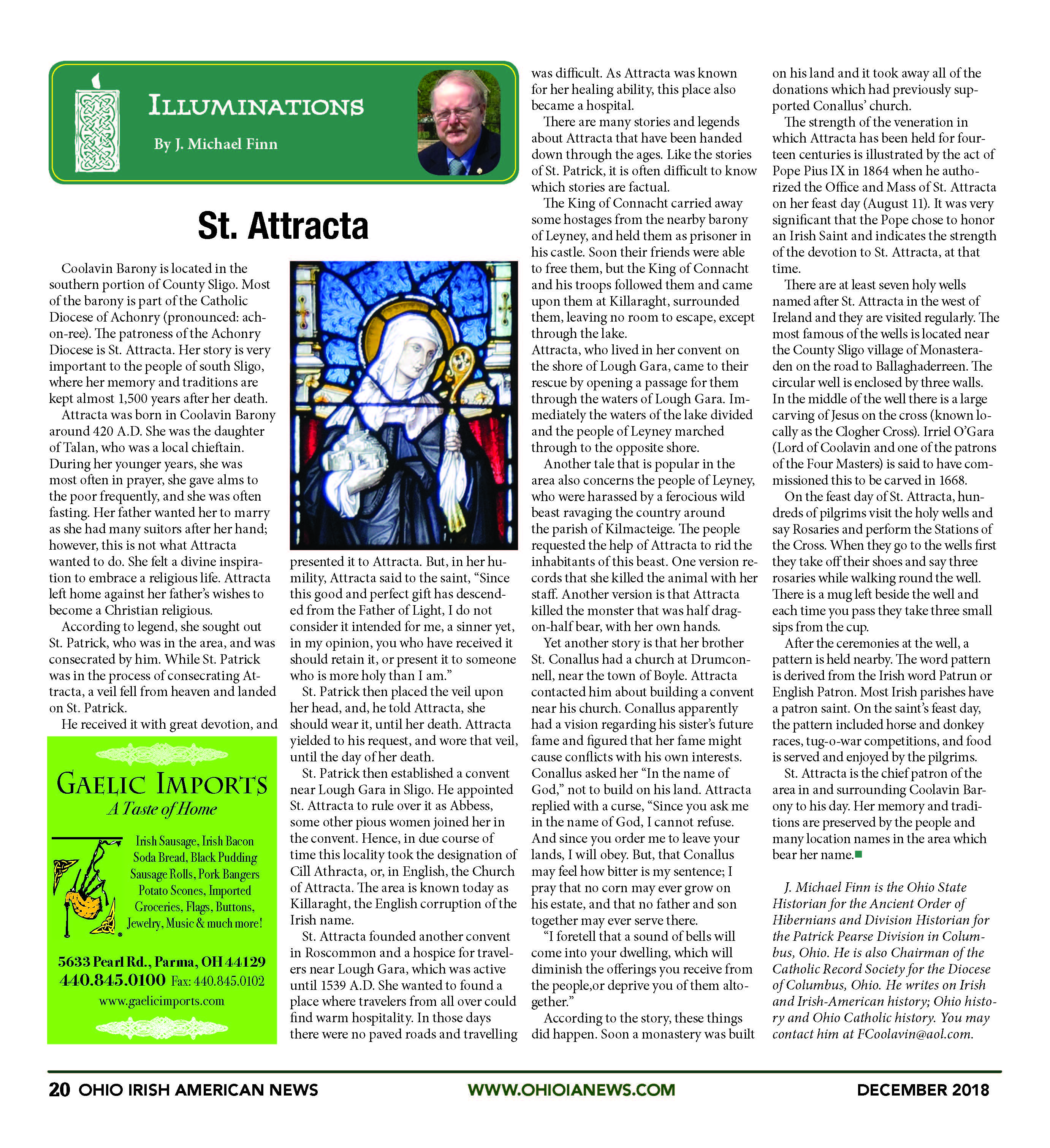