Off the Shelf: The Witches Elm, by Tana French - News and Events - Ohio Irish American News

The wych elm or witch elm in the title, is a variety of Scotch elm that has the widest range of any European elm species. It is the focus of Tana French’s latest mystery-suspense thriller and the fourth book written by French reviewed in this column.

The skeletonized remains of a young man are discovered inside a wych elm of a Dublin manse owned by Hugo Hennessy, the uncle of the book’s protagonist- narrator, Toby Hennessy. Toby is a publicist for an art gallery in Dublin who becomes involved with an artist skanger (a derogatory word, used mainly in Ireland, referring to a low-income working-class youth) who fraudulently touches up a painter’s work to make it more saleable. He is suspended from his job and soon is beaten within an inch of his life by intruders who enter his home and are caught by Toby during the burglary.

After leaving the hospital he lives with his uncle, Hugo, who is dying, to recuperate in his home, called the Ivy House. There is a skull found in a wych elm at the foot of the Ivy House garden. 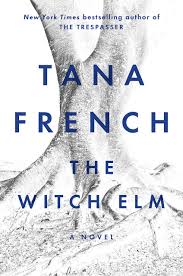 So, we have the classic mystery-novel situation times two – who set up the beating and how did the skull get into the trunk of the tree? The burglary aspect of the story turned out to be tangential to the main story, until the final forty pages of the novel. However, the skeleton belonging to the skull is quickly identified by the police as belonging to a former friend of Toby and his two cousins. These two have significant parts in the story because they, along with Toby, spent considerable time growing up at Ivy House.

While the book is a combination mystery- suspense novel, it is above all literary fiction, which is to say fiction which enriches our lives rather than just serving to pass the time in an airplane or in a doctor’s office. The characters, including the former wild-child Susanna and the gay Leon, along with the police who investigate what turns out to be a murder make the story engaging and holds the attention and curiosity of the reader. French has eschewed her popular Dublin Murder Squad services here to write a stand-alone novel that this reviewer found to be a TOP SHELF read.

*Terrence Kenneally is an attorney and owner of Terrence J. Kenneally and Assoc. in Rocky River, Ohio. He defends insureds and insurance companies in insurance defense related legal matters throughout the state of Ohio. Mr. Kenneally received his Masters from John Carroll University in Irish Studies. He also teaches Irish History and Literature at Holy Name High School and has been the President of the Holy Name for three years.

Singer Songwriter Siobhán O’Brien: You Can’t Run Out of Love

A Conversation with Author Patrick Radden Keefe, by Sabina Clarke