Young & Irish: How an Irishman Built the White House
by Mary Kate Campbell

The White House is not only the residence of the President of the United States, but it also stands as the residency for freedom, democracy, and the spirit of the American people. It is an iconic patriotic symbol recognized around the world, and we have an Irishman to thank for that.

In 1758, James Hoban was born in Callan, County Kilkenny, to a tenant farming family on an estate belonging to the Earl of Desart. He worked there as a carpenter, until he was granted a place in the Dublin Society’s Drawing School in his early twenties. He was a star student and earned prestigious awards for his drawing abilities. The school’s principal, Thomas Ivory, recognized his talent and offered Hoban an apprenticeship. It is said that together they worked on projects including Dublin’s City Hall and the Custom House.

After the Revolutionary War, Hoban moved to the United States in 1785, and established himself as an architect in Philadelphia by taking out ads in local newspapers describing his services. By 1787, Hoban had moved to South Carolina, where he continued to design, including a 1200-seat theatre and the refurbishment of the Charleston County Courthouse.

In December of 1790, former President George Washington signed an Act of Congress, stating that the United States federal government would live in a district, “not exceeding ten miles square…on the river Potomac.” Together, Washington and city planner, Pierre L’Enfant, chose the site for the future presidential residence, which would later be known as 1600 Pennsylvania Avenue.

A contest to design the American president’s new house was held. Nine proposals were submitted. President Washington admired Hoban’s work for its simple lines, practicality, and conservative nature, therefore Hoban was named the winner in July 1792.

His initial design included three stories and nine front-facing window bays. Ultimately, the design ended up as two stories, eleven window bays, and Washington insisted it be built completely in stone. Construction began in 1792 and was completed in 1800, making John and Abigail Adams the first residents. However, it would not be until 1901 when Theodore Roosevelt re-named the “Executive Mansion,” “The White House.”

After being recognized for his effectiveness and problem-solving skills during the presidential residency job, Hoban was a widely respected and sought-after architect. He spent the rest of his life in Washington D.C. working on projects, including the construction of The Capitol building, the U.S. Treasury, the offices for the State Department, War Department, and U.S. Navy, and the reconstruction of The White House after British troops set it ablaze in 1814.

He died on December 8, 1831 and is buried at Mount Olivet Cemetery in Washington D.C. His son, James Hoban Jr. served as a district attorney in D.C.

His legacy lives on in both America and Ireland. On August 7, 2008, a memorial to Hoban was unveiled in Kilkenny, only 100 yards from his birthplace in Callan, and an exhibition of Hoban’s life can be found in the White House Visitor Center. 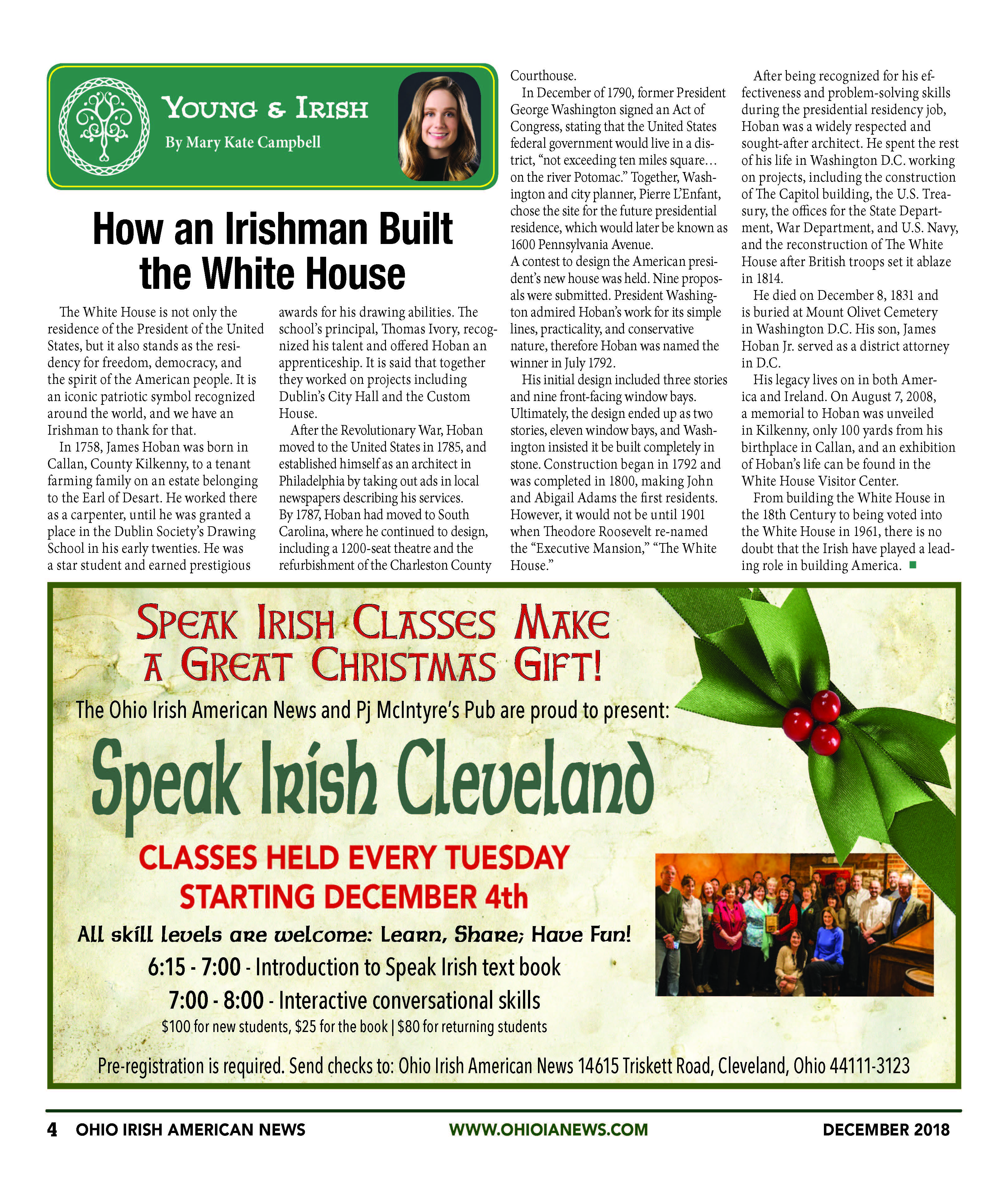 Illuminations: The Promise of Peace