Language is a virus, sang the punk performance artist Laurie Anderson. While not exactly a catchy tune, it has something that stuck with me. The quote really belongs to William Burroughs, but he didn’t play a saxophone.

Anyway, what stuck with me was the idea that language could be an impediment to true communication. While language can reveal our thoughts, it can also disguise our true natures and be full of trickery.

Everyone feels frustration with words and their persistent inability to capture our thoughts and emotions. For as much as we are able to reveal with words, language both frames and confines. The heart may feel Shakespeare, but something more like Donald Duck often comes out of the mouth. Language can also get us into trouble, a man’s tongue often broke his nose, as the saying goes. Yet, the right words at the right time have inspired actions both good and bad.

It was positive inspiration last weekend at an evening that celebrated the Irish language that I was lucky enough to attend. There is something about Irish, it gets under your skin in a good way. 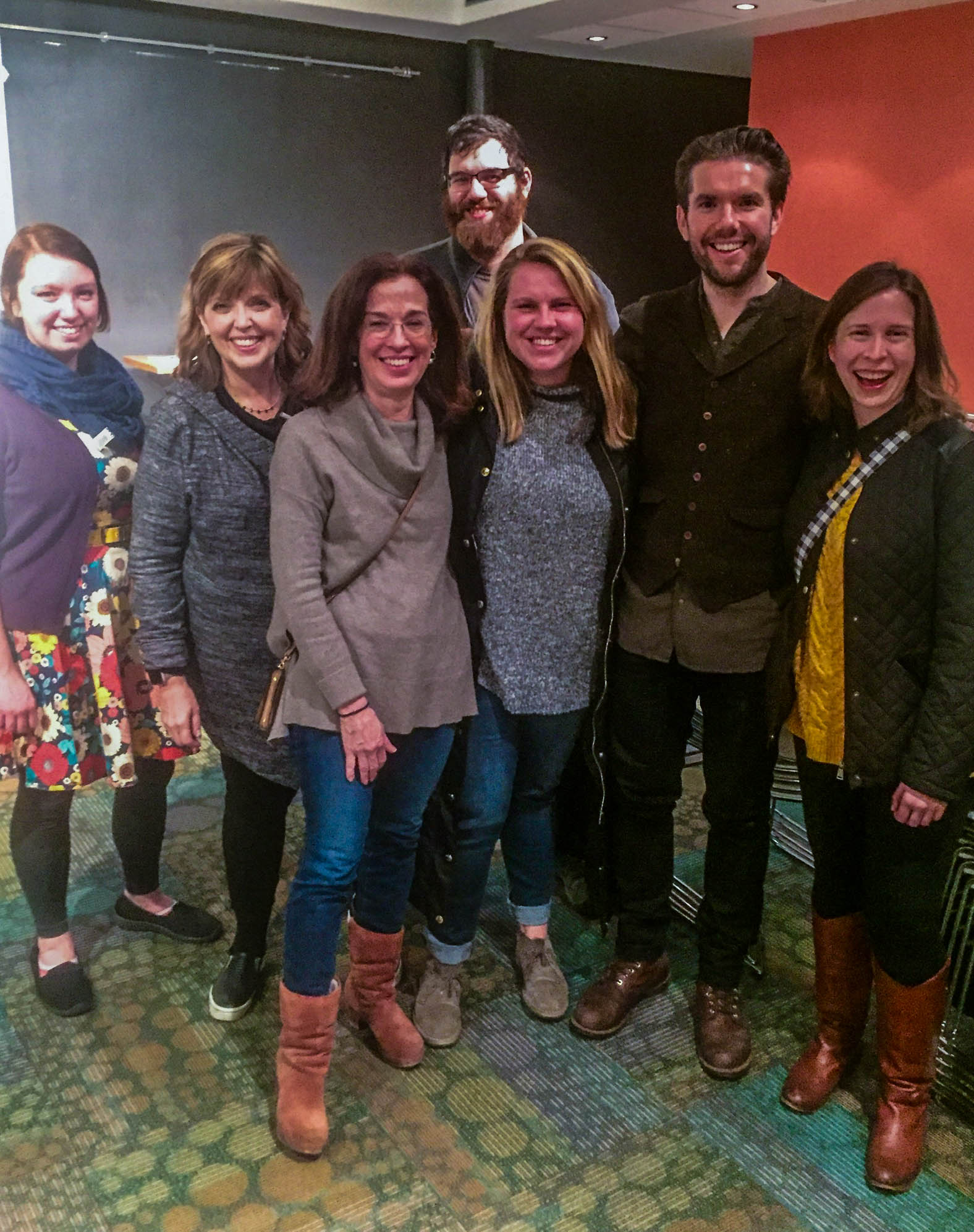 The evening was a combination of storytelling, personal anecdotes, poetry and song performed by the actor and Gaeilgeoir, Dónall O’ Héalaí. A Gaeilgeoir (galgor) is an Irish language enthusiast, and Dónall is most certainly that. The theme of the evening was about how conversation has the power to change lives.

In his case, it was an evening spent beside the fireplace with his father, watching the turf glow and discussing the fate of the Irish language that proved to be pivotal. His family have lived as Irish speakers in the Gaeltacht their whole lives and the talk turned, as it had before, to the declining use of Irish.

He asked his father what harm would come if the Irish language disappeared. His father replied that it would mean the death of beauty. Now that might come as a surprise to many, Irish can sound harsh and guttural. It is more German than Italian to the ear.

But look at the landscape of Ireland that so people love, and you will see that it is harsh too. The language mirrors that stony landscape. Something else to keep in mind, is that the sound is affected by the person speaking as much as a violin is affected by the musician.

One of the most vexing things about Irish is the twists and turns the meanings and uses of words take, again mirroring the landscape, just like the twisting country roads. It is in the twists that the words weave, and that fabric is what makes the Irish oral tradition so famous. The winding road is not the quickest, but it has more scenery.

In what has to be my favorite response to the why learn Irish question, Dónall said because Irish is an organic invitation to the soul to see life a little differently. Wow, that comment alone was inspiring and had to motivate some learning.
He shared some charming phrases to illustrate his point; a wolf in Irish is called Mac tire (mak teera) or Son of the land, a ladybug is called  bóín Dé (boeen day), or God’s little cow. It is pretty easy to see the that it does change your perspective on the world. Besides different descriptions, the Irish language just thinks differently.

When you talk about speaking in Irish, the preposition that is used is with-you do not tell to or talk at a person, when you speak, it is always with them. Just the frame changes the perspective and implies connection and sharing. It is no wonder lives are altered through conversation or in Irish, comhrá.

Irish is an old language with a rich oral tradition. That may be why many people feel that it can reach the heart of a situation more directly. It may not be the first choice when you are discussing internet stock mergers, but it is life changing when in a sad love song.

Dónall advised the group to reject any language that is not generous enough to your heart or imagination. When he sang it was in the Sean Nós, or old style, a capella, and with eyes closed so that the song comes from inside singer alone.
He compared it to the singing of a stream, the sound it makes is pure and for itself. There is no trickery in the conversation that we hear in a stream or the wind. Reject language that is too small for your heart.

Coming home and sitting on the plane, I had that slight dread of my seat mate, the curse of flying alone and not being able to choose your company. A man sat down and immediately began the small talk that you would associate with strangers on a plane, “how ‘bout them Browns, weather?” etc. Banal, but where are people to begin?

I am as guilty as anyone of not always being a good listener, but he wanted to talk, and I felt inspired to listen. He told me about growing up in Cleveland, moving away to pursue his career, making good, and then having his life turned upside-down with the birth of his twin daughters.

Normal enough reaction, but the challenge of having a family was compounded by the challenge of having one of the girls born with severe disabilities. His life changed and he wonders about things that he did not before, like why we live in a world that does not help others more and can be downright unkind to his child, and why he and his wife are left to feel so alone in this struggle. He proudly produced pictures of both girls, being sisters and having fun together, mostly due to the care and modifications that he and his wife provide, striving to make a happy normal life for the girls. I listened and heard and learned through that conversation. Reject language that is too small for your heart.

*Lisa O’Rourke is an educator from Akron. She has a BA in English and a Master’s in Reading/Elementary Education. Lisa is a student of everything Irish, primarily Gaeilge. She runs a Gaeilge study group at the AOH/Mark Heffernan Division. She is married to Dónal and has two sons, Danny and Liam. Lisa enjoys art, reading, music, and travel. She enjoys spending time with her dog, cats and fish. Lisa can be contacted at olisa07@icloud.com.

Please send any Akron events to my email! 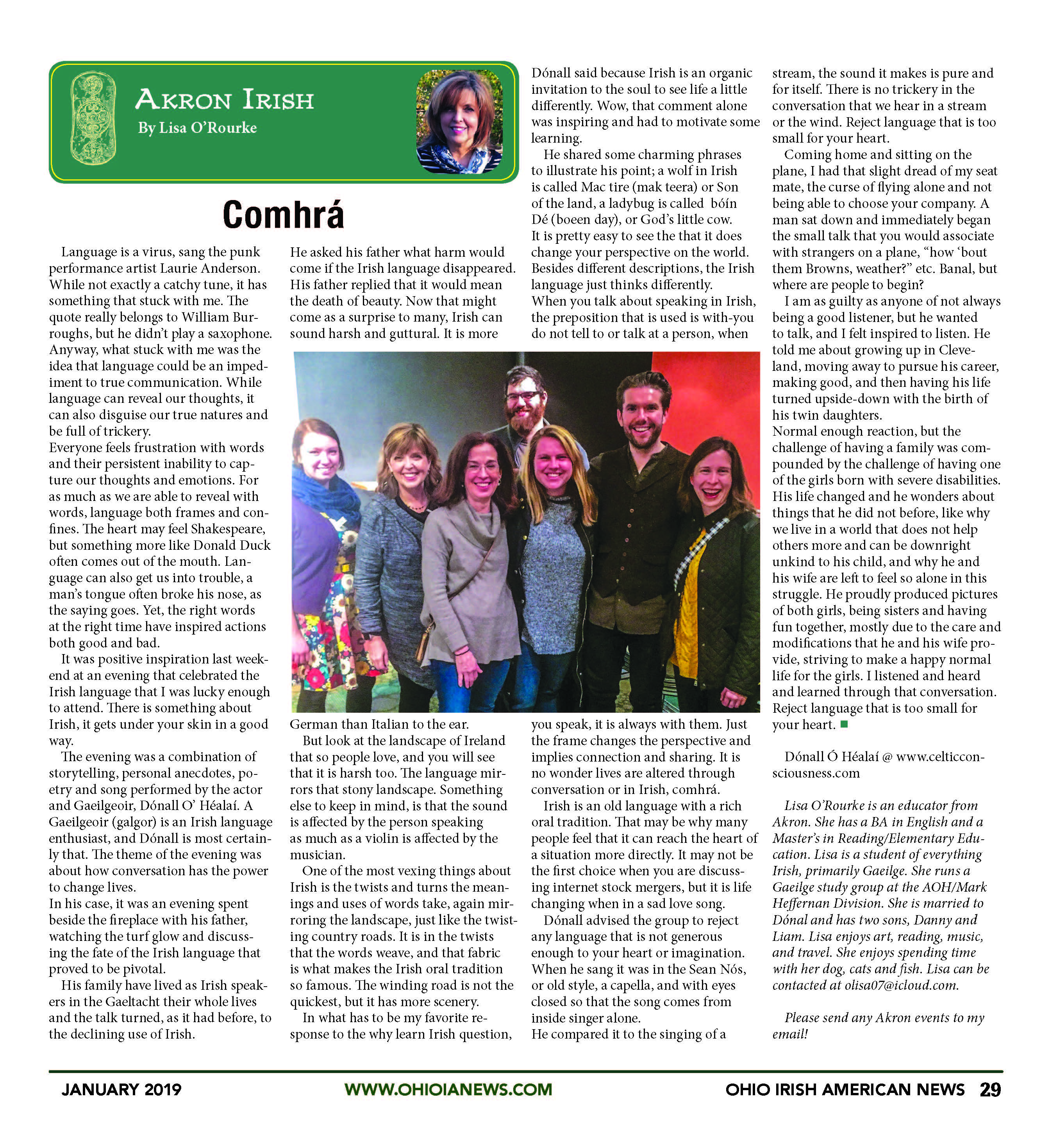 Akron Irish: Witness: The Bravest Man I Ever Met