At Home Abroad: New Year’s In Ireland
By Regina Costello

I am happy to spend the Bliana Nua-New Year’s – celebrations nestled in my warm home surrounded by family and close friends.  An endless day of lounging in front of a blazing fire, sipping refills of mulled wine* from the simmering pot on the stove and helping myself to yet another mince pie with whipped cream.

New Years’ Resolutions pass me by.  I know where my strengths lie, and this is definitely a weakness.  I know I will never make that “one in eight” who actually succeed in this endeavor.  I satisfy myself by looking back on the better parts of the year gone by and like the rest of humanity, I hope for a better year ahead.

I enjoy finding that sweet spot on the sofa in front of the TV and watch nations around the world ring in the New Year.  These self-indulgent hours allow me to think of the friends gifted to me during my twenty years living in Cleveland as their countries of birth or origin pop up on the screen.

My family across the pond is foremost on my mind too.  Stories that my parents shared with me, I in turn share with my twins.  This holiday is the perfect time to recall some Irish New Year traditions of times gone by.  It’s an enjoyable venture and seeing my kid’s reactions from disbelief to awe as I regale them with tales is a somber reminder that time really is passing, and the world is changing very rapidly.  Let me share a few with you.

In years gone by, Irish New Year’s Eve traditions determined the luck of the house for the coming year.  Everything that happened on NYE had significance for the year ahead – especially anything that transpired as midnight approached.

Superstition taught that luck was limited and ensured careful behavior on that day to secure as much of it as possible!  Like so many other cultures, the common ritual of cleansing the house to perfection in an effort to rid the home of any negativity and to “wipe the slate clean” as it were, also applied to the Irish.

It was imperative that the first person to enter the house after midnight be a dark-haired male.  God forbid it was a redhead!  A year of hardship and grief would ensue!  This “first footing” belief was taken so seriously that if necessary, families sent out for a dark-haired male and gave him treats or money for his trouble.

A big feast was eaten that night in the hope that food would be plentiful for the year.  It was common for the housewife to make a cake, which was pounded against the door of the house three times while saying prayers to ward off bad luck and to banish hunger in the months to come.  Believe it or not, the family would then gather up the bits of cake and consume them!  – “Yeah, sure Mam!” I can hear my kid say.

The same was done with animal feed to ensure plentiful food for the farm animals also.  Young girls believed mistletoe to be magical and placed it under their pillows hoping to dream of their future husband.  An extra place was set at the table in remembrance of loved ones who passed away and the latch on the door would be left unlocked during dinner. Visitors would enter by the front door but leave by the back door for good luck.

Families, neighbors and friends gathered around the fireplace sharing stories, joking and reminiscing about old times.  As time goes by, I find myself in such company, but unfortunately not in front of a turf fire.

Ireland of today celebrates NYD with various themed parades in a few cities and villages scattered around the country that draw significant numbers.  Of course, the parade in Dublin is the largest in the land, where musicians, dancers, artists and others gather on the streets. Interestingly enough, Portmagee, a small fishing village in County Kerry, focus on the year gone by rather than the new year to come.  Other rural areas chose religion as the theme for their parades.

One common activity throughout the coastal regions is to brave the chilly waters surrounding the island – The Irish Sea and the Atlantic Ocean.  Courageous Irish mortals, old and young, boldly enter the freezing waters for short swims. The ancient tradition of sports and matches on this day continues, particularly hurling.

In Ballintoy, two hundred years ago, the Reverend Robert Trail noted that New Year’s Day hurling “ended with drinking whiskey and broken heads.” I hope to travel to Ireland this year and soak in traditions much missed.  I look forward to continued reminiscing with my siblings of times gone by and join my kids for a dip in the beautiful crisp waters of Keem Bay on beautiful Achill Island.

*Mulled Wine:  Ingredients:  1 lemon; 1 orange, 4 dozen cloves, 6 oz brown sugar, 2 cinnamon sticks, 2-star anise, one bottle of red wine and half a bottle of ruby port.
Method:  1.  Peel the lemon and orange. 2 Insert cloves into peeled fruit and place fruit in saucepan with a pint of water.  Add sugar, star anise and peel from the fruit.  3.  Stir until sugar dissolves.  Simmer for one hour to release flavors.  4. Strain and discard fruit and spices (I prefer to skip this and I enjoy the fruit chunks in my glass) and add the alcohol.  Return to stove and reheat to a boil.  5. Serve hot with orange and lemon slices with nutmeg sprinkles.  Recipe:  The Irish Countrywomen’s Association Book of Christmas.  General Editor: Aoife Carrigy.
Sources consulted: www.irishcelticjewels.com; www.thefadingyear.wordpress.com; www.123newyear.com;www.thewildgeese.irish
*Regina is a Graduate from the National University of Ireland, Galway and a Post Graduate from the National University of Ireland, Dublin.  She is the former Curator of the Irish American Archives at the Western Reserve Historical Society, former Executive Director of the Soldiers’ and Sailors’ Monument Commission and former Executive Coordinator of the Northern Ohio Rose Centre. She serves on the Board of Directors of the Mayo Society of Greater Cleveland.  She can be reached at rcostello@ameritech.net 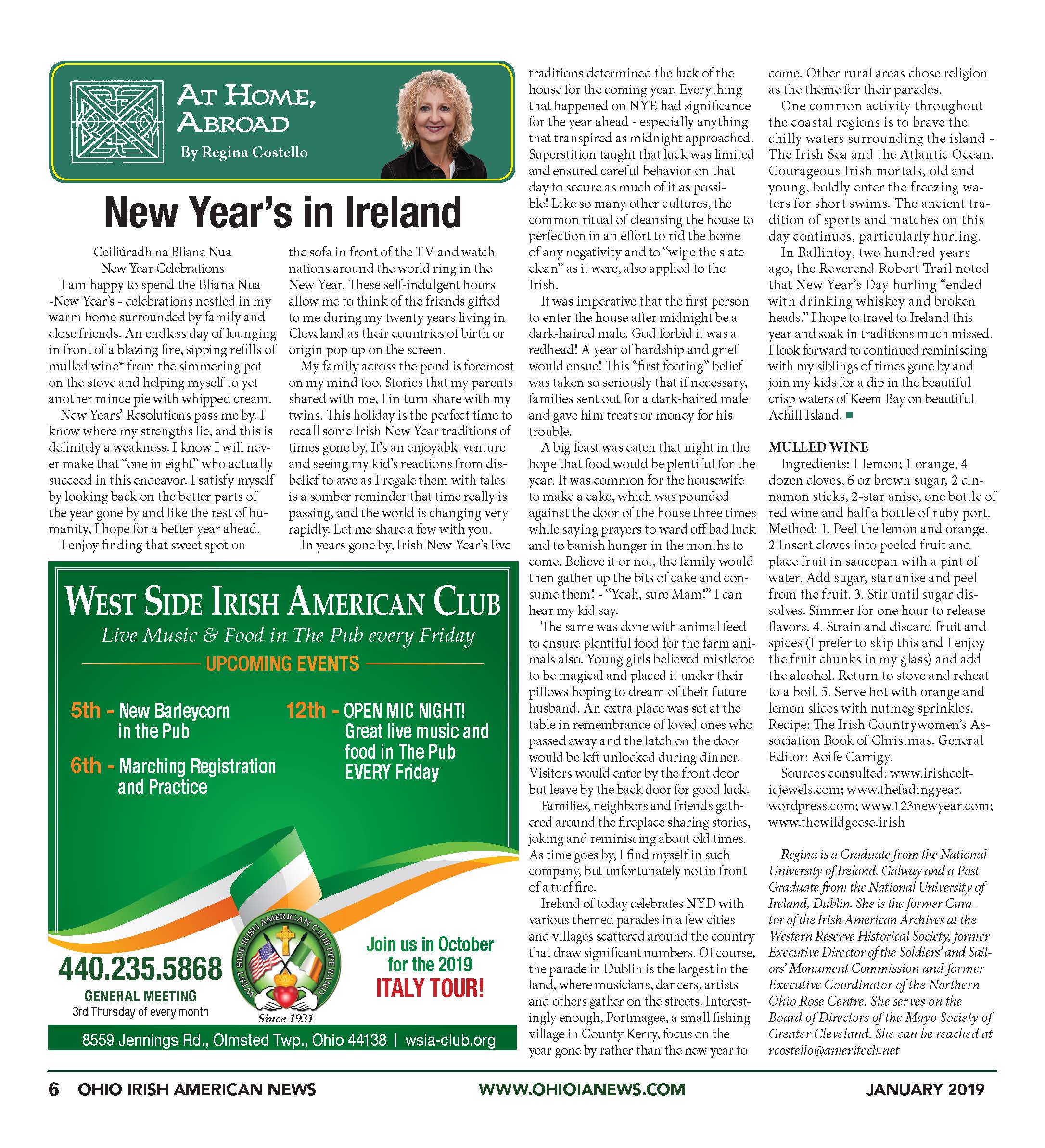 At Home Abroad: Go Gather By the Humming Sea