The Easter Uprising of 1916 led to a general election in 1918 ,with a victory by Sinn Féin (the irish for  ourselves alone), who declared Ireland an Independent Irish Republic. On January 21,1919, a relatively small group of men calling themselves The Irish Volunteers, initiated a guerrilla war against the British in an effort to establish that republic.

An all out war against the British was out of the question, a lesson learned from the Uprising. The volunteers lacked the manpower, resources and training to go head to head with Britain’s battle-tested troops. Instead they organized into small secretive groups who could strike and then blend back into the population.

By August, they had become the Irish Republican Army, acting in what they believed was the best interest of the Irish people. They attacked government properties to disrupt British authority and targeted persons of prominence, with the Royal Irish Constabulary being their most significant target.

The police were responsible for law and order on Britain’s behalf, they were vulnerable, extremely unpopular and the best source for obtaining weapons and munitions. Many Irish civilians became supportive of the IRA in part because of a growing sense of patriotism but also because of the indescriminate, oppressive nature of the British Government’s response to the actions of the IRA.

Sinn Féin (pron. Shinn Fane) backed the IRA, and many of its members were active in both groups. Michael Collins was a key figure in both organizations. He was instrumental in providing the volunteers with money, arms and equipment as well as identifying targets. His largest contribution came in the form of intelligence. He created a network of informants and sympathizers that even reached into Dublin Castle and the police force.

In 1919, a group of men Collins hand picked,targeted and eliminated Dublin’s detective constables known as the “G” men. Although Michael Collins has been immortalized in countless books and films, it should be remembered in this type of warfare, it is the small individual groups and their commanders who inflict the real damage. Relentless attacks from an enemy you can’t meet head on costs lives, finances and can destroy the moral of the most powerful army.

The violence peaked November 21,1920, a date tthat came to be known as as Bloody Sunday. Collins and his team, using information from his informants, targeted nineteen British Army intelligence officers, living undercover as civilians in Dublin. The attacks came early in the day, with the police retaliating just hours later by firing into the crowd at a football match at Croke Park, killing fourteen.

Earlier that year in August, the British Army had been given the authority to imprison people on suspicion alone, with no trial. By August 21, 1920, 4,500 had been imprisoned from the onset of the war. This act by the British sent many volunteers on the run and in essence became full-time warriors with no hope of returning to a normal existence until British rule and occupation was erradicated from Ireland.

Throughout the war the IRA waged an effective, costly war on the British, but by 1921, Sinn Féin leaders opted for negotiations with the British.

They feared continued violence would soon take its toll on the volunteers, especcially as British troop numbers were increasing. They felt nothing more would be accomplished by prolonging the fight as the British Government  seemed sincere in their desire for peace.

A military victory was no longer seen as a sure thing, and the British people had become increasingly critical of the governments agenda in Ireland as the cost in lives and money continued to grow.

In 1920, Westminster passed The Government of Ireland Act, which created two governments. One, in Belfast, with jurisdiction over the six counties in the northeast, and one in Dublin to oversee the remainder of Ireland. Ulster Unionists accepted this act, but not so the nationalists that had supported the IRA during the war.

A truce in July led to negotiations between Sinn Féin and the British and a controversial treaty was signed. Those who favored it saw it as a way to unity in Ireland; those who opposed it saw it as a failure to do the one thing they fought for – to have Ireland become an independent republic. Civil war was inevitable.

It has been 103 years since The Proclamation of 1916, and the thirty-two counties are still divided. A new hope for a united Ireland surfaced again with The Good Friday Agreement in 1998, and now there is talk once again of the prospect, as Brexit’s reality comes closer. Whatever happens, let’s pray it is in a peaceful and just manner; there has been enough pain in Ireland’s history.

*Bob Carney is a student of Irish history and language and teaches the Speak Irish Cleveland class held every Tuesday @Pj McIntyre’s. He is also active in the Irish Wolfhounds and Irish dogs organizations in and around Cleveland. Wife Mary and hounds Cian and Morrighanand terrier Doolin keep the house jumping. He can be contacted at carneyspeakirish@gmail.com 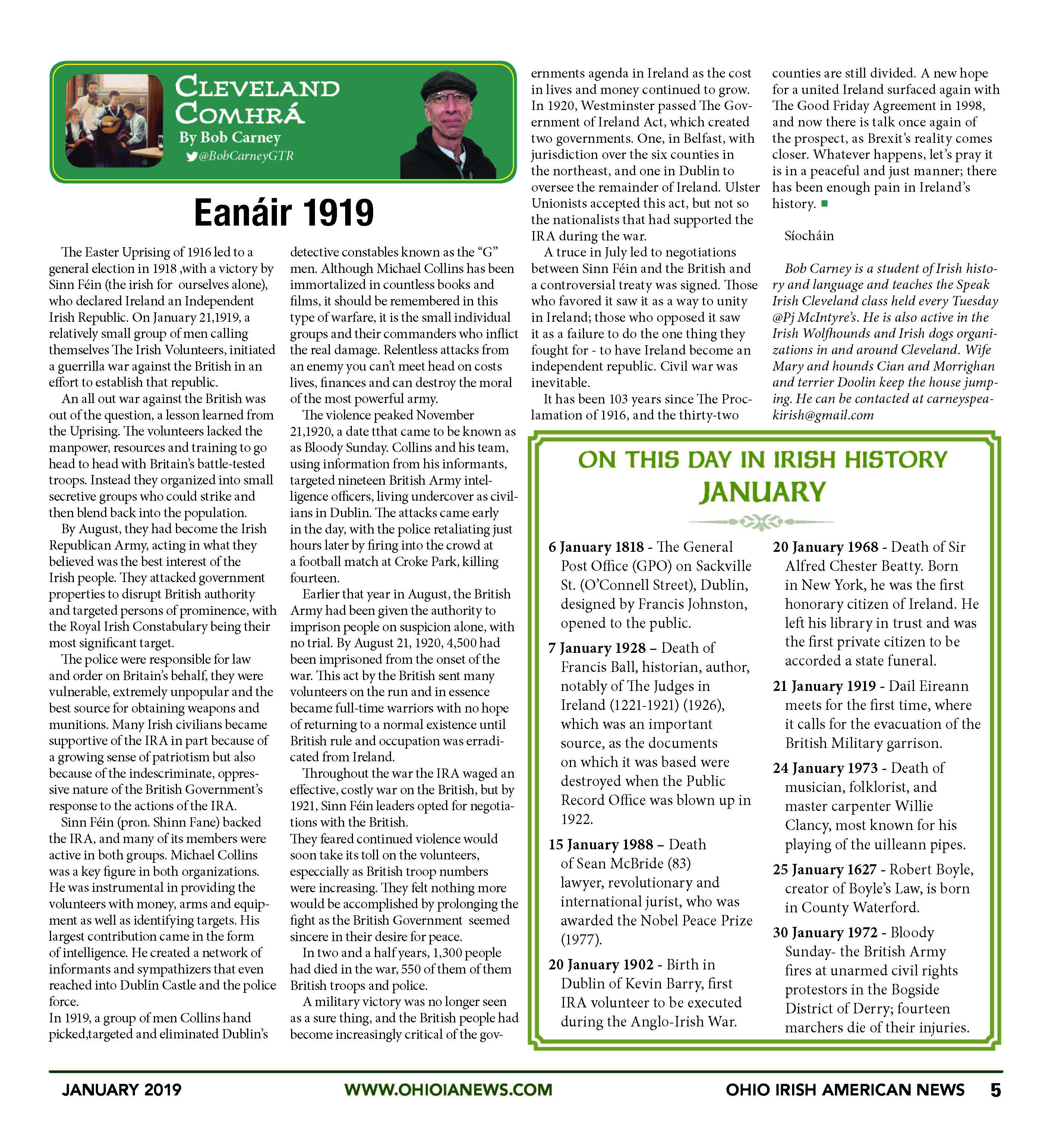 Young & Irish: A Piece of St. Valentine in Dublin