My Uncle liked to get a pint.  One of his talents was, he could always unearth a distinguishing and redeemable trait about any pub.  He would traverse from the Heights, mostly back to Collinwood, his Cleveland point of origin, and have a pint or two.

“The Bucket of Blood” was the hang out, with Mr. Murphy.  On occasion it was a wee bit more than a pint or two.  He prided himself on his aptitude to arrive back in the Heights.  It was part his self-conceptualization of being an Irishman.

Thing is, when he was over-pinted, he would tend to follow whatever car was in front of him.  One morning he woke up in Erie with a hangover; he grumbled Erie was punishment enough.  Good thing Collinwood was not touristy.

It did not happen every time, but often enough to be deemed habitual.  Aunt Irene was not fond of his travels, yet did not confront him.  She concocted a strategy.  She would follow my Uncle, but she would not go in.  Uncle did what Uncle did and, upon his exit, she would pull in front of his car.

He followed her home time and time again. I asked Aunt Irene why she did not just drive him.  “That makes no sense.”

In Cleveland during the 1880s, it was just as important to some people how you got there, and not that you got there. The Land League has been shown to be an example of that paradox.  Bishop Gilmour was a supporter of the Land League and its proposed reforms for Ireland, as was much of the American Catholic Church.

He was not a fan, to put it mildly, of the Ladies Land League.  Mary Rowland and her colleagues were compelled to make a choice.  Their excommunication signaled one of many divisions in the movement for a free Ireland.

The No Rent Manifesto was a form of passive resistance that separated those who wanted freedoms adjudicated or bequeathed by the state and those more revolutionary.  That more “revolutionary” stance alienated some in America.  It caused a split in the once unified support of the American Catholic Church.

That in turn prompted individuals and Irish American organizations to declare a position.  The Cleveland Ancient Order of Hibernians supported the Church and Bishop Gilmour with respect to the local Ladies Land League.  As the disputes became increasingly dogmatic, Hibernians were obligated to make other choices.

In August of 1883, the County Board of the Ancient Order of Hibernians held their quarterly meeting at Cathedral Hall, in the same building as the school just east of the Cathedral.  They discussed the arrival of fellow Hibernian Alexander Sullivan from Chicago.  He was President of the Irish National League of America and was to visit Cleveland on the 23rdof August.  There was a picnic planned at Rocky River and it was sponsored by Cleveland’s Parnell Branch of the Land League.

The AOH published their intentions in the Plain Dealer:
“Be it resolved that the Hibernian Rifles and Presidents of the divisions act as an escort to Mr. Sullivan from the hotel to the depot and pay him that respect and attention which is due him as an honored member.  Further than this the action of the meeting did not extend.  The Ancient Order of Hibernians is not called out as a body to attend the picnic now as a dress parade or drill exercise promised on the part of the military.  While sympathizing individually with the objects of the League of which Mr. Sullivan is president, the Ancient Order of Hibernians as a body belongs to no other society or organization and apart from the demonstrations connected with the church or civic celebrations cannot and will not as a body take in other gatherings. It is deemed necessary to make this correction because of the erroneous report of the proceedings of the above meeting which appeared in the daily papers the following day and which have since been the cause of much misunderstanding.”

It is astounding how much Irish American discourse was printed in the daily papers.  It is also clear that the Irish American community in Cleveland was concerned with how they were covered in the press and were quick to correct any real or perceived errors.

The AOH was steadfast in its purpose and mission.  It also made clear the separation of the organization from the individual actions of members.  History does not detail how many Hibernians were at the picnic in Rocky River on the 23rdof August, 1883.  What is safe to say is, considering the logistics, there was no Guinness.

The Diocese of Cleveland had just established St. Coleman’s Church in 1880.  In the next fifteen years, the Diocese would open three more Irish churches: St. Aloysius Church, St. Thomas Aquinas Church and St. Catherine’s Church. Further indication of the mutual support of the AOH and Diocese was the ability to host the AOH National Convention in 1884 at the Cathedral Hall.

Members found accommodation at the Kennard House, Bank (W. 6th) and St. Clair.  The procession marched on St. Clair to Water, then up Superior to the Cathedral for Mass.  As Michael Byrne would say, “It was a scene.”

Father Thorpe read and explained the Gospel of St. John, Chapter 15, verses 1-11.  “You are a convention of Catholic benevolent societies and have done much good to your fellow-members and to others.  The daily press have told us but yesterday of the good you have done in dollars and cents.  But Christ shall reward good works only in so far as they are done in Him.  Your association and its works must be built on a higher and more lasting foundation than human praise and human motives.  You are here as a Catholic association.  Be Catholic in reality.  You are sons of the martyrs and co-heirs with Christ.  Make yourselves worthy of that high dignity. Look higher than time for your reward, look to eternity.”

After the sermon, delegates met in secret session.  Hibernians were well-known and well-respected in Catholic Cleveland.  They supported the Bishop and the Church.  Their ability to host the AOH National Convention indicated their positon in Irish Catholic America.  Following their private meetings, they then toured the city in their own vehicles, each able to take a separate path to a common destination.  They did not make a stop in Collinwood, Aunt Irene would have approved. 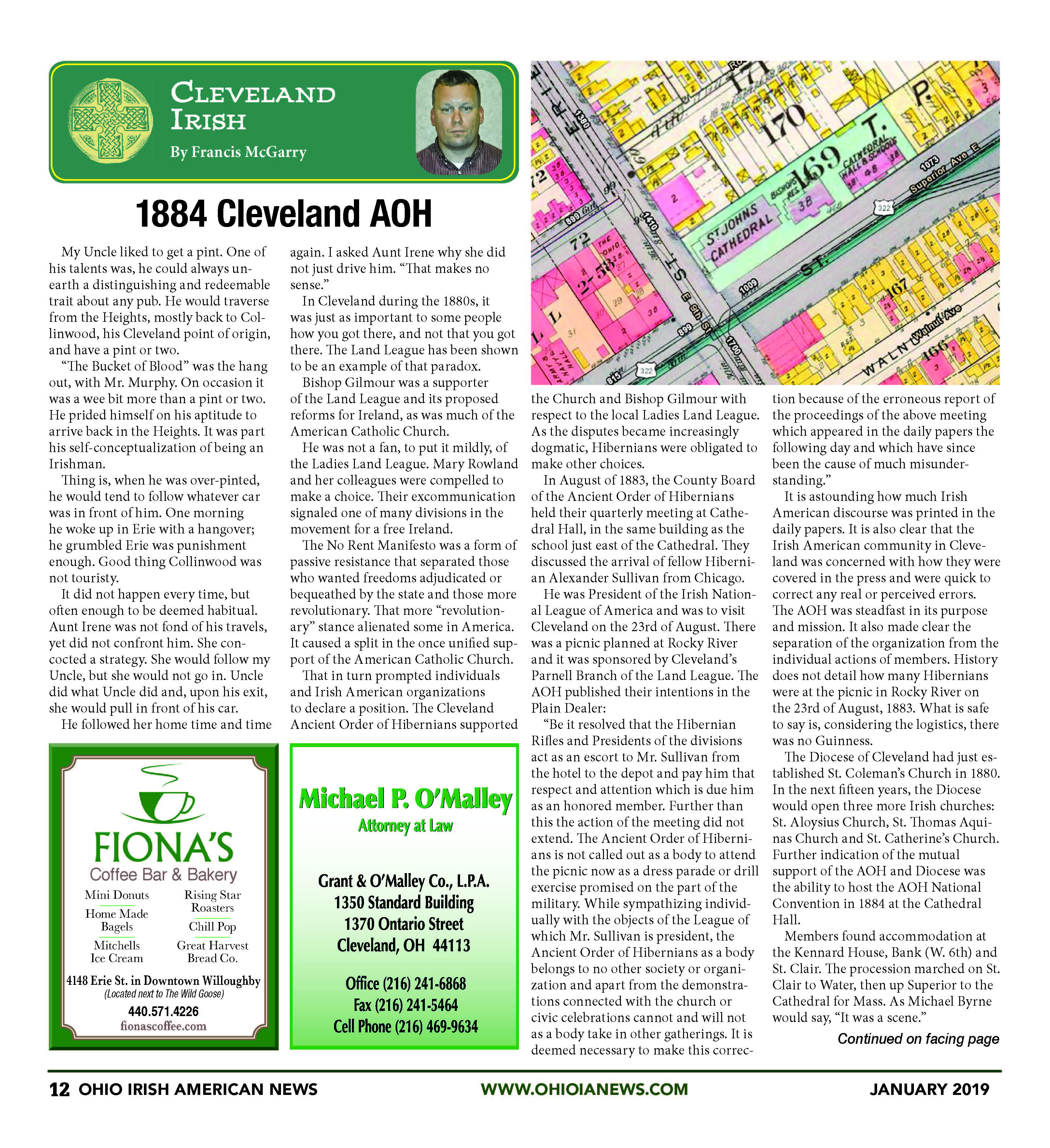 Where Do You Read Your Ohio Irish American News?