A huge thank you goes to two members of the board stepping down from their roles, but not their commitments.  First, Vice-Chairperson Jim Coyne has been instrumental both on and of the field, bringing the two former clubs of St. Pat’s and St. Jarlath’s together.  Jim will continue to work with the team alongside Simon O’Doherty (Coach), to be a support and alumni recruiter, to run the Super Bowl fundraiser, and to chair the upcoming Cleveland 7-a-Side Tournament.  Jeepers! He may be doing more now than he was doing on the board, hahaha.  Go raibh míle maith agat, a Shéamuis!

Secondly, Public Relation Officer Steve Pepin has brought the club into the 21stcentury of social media, having established and grown our Facebook, Twitter, and Instagram followers (sign-up, if ye are not already).  Steve is also a veteran of the club (sorry old man) who’s wisdom and experience will be missed from the board.

Steve will be just as active with the Club, as he will now chair the Sponsorship Committee.  Contact info@clevelandgaa.com is you are interested in establishing a partnership with your local GAA club.  Agus, go raibh míle maith agat, a Stiofáin.

Replacing the lads will be Nick Cobos and upcomer Dan Kampman.  Nick, in all essence, has been on the board, having participated in most of the prior years monthly meetings.  He will be a great asset this year and for years to come.

Dan Kampman was a fresh face and formidable presence on the field in his rookie season last year.  He is one of the guys that got the GAA itch, barely missing a training session and now wanting to get more involved with his Club.  We are very excited to have him on board.  Go n-éirí libh, a leaideanna!

Onto the fields.  At the time of publication, our first groups of footballers will be taking on the softies of that foreign sport, soccer.  Cleveland GAA has put both a Men’s team and a Co-ed team into the Caps Fieldhouse indoor league for a bit of fitness, fraternity, and fun. The league runs every week from January to the end of February.  Good luck players.

From the soccer fields, Cleveland has committed to starting an indoor 7-a-side Coed Gaelic Football league.  The league will commence in March after an introductory skills session and new players will be mixed with experienced players. The league will run for two months until training for the summer league begins outdoors in May.  Sound interesting?  Want to learn more, meet new people, and get active in the cold months? Contact info@clevelandgaa.com.
Cleveland GAA is also forming a  Ladies Gaelic Football team for competition in the summer.  Those interested in playing or learning more should email: ClevelandLadiesGAA@gmail.com.

Youth Gaelic Football:  The Youth will once again resume indoor activities on January 12thand 26thfor FREE SKILLS CAMP.  These are especially for the new player to understand and feel comfortable with the game.   The camp will be divided by ages this year.

Following the Skills Camps in January, the sessions will open into League play of games every-other week for the months of February, March, and April.  Teams will comprise of up to ten players of the same age group.  Contact ClevelandYouthGAA@gmail.com to sign-up or learn more.

Night at the Races:  Our annual fundraiser is February 16that the West Side Irish American Club; doors open at 6pm.  There is free baby-sitting onsite.  The kids have a blast.  This event is more than a fundraiser, it is a chance for supporters, alumni, sponsors, players, and families to get together for a few hours and have fun.  Full tables are available (8-10 seats) or individual tickets.

The $25 night includes a hot dinner, Guinness, Harp, Miller Lite, wine, and soft drinks.  Feel free to bring your own desserts or appetizers.  You can also name the racing horses – lots of opportunities for sponsorship and advertisement.  Contact Vincent at ClevelandGAA@gmail.com.

Go raibh míle maith agaibh(thanks y’all) to our readers and supporters. Consider getting involved at any level.  Fáilte(welcome) to all.  The Gaelic Athletic Association is Ireland’s largest sporting organization and a bit of home for the Irish abroad here in the US.  Beyond sports, the Association also promotes Irish music, song and dance and the Irish language as an integral part of its objectives. 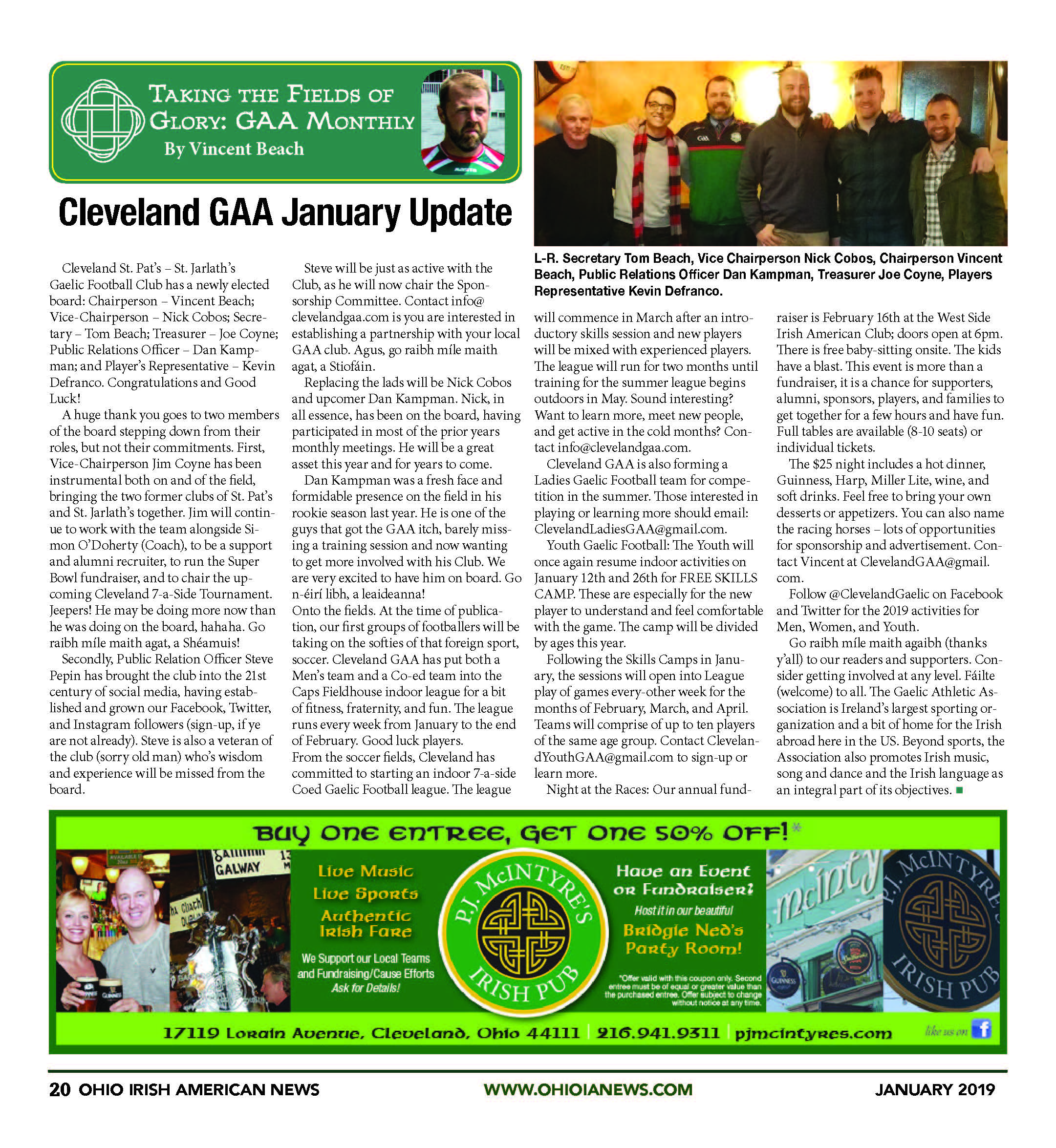 Taking the Fields of Glory: Midwest GAA May