As a new year arrives, we continue to recognize significant 100-year anniversaries in the history of Ireland that followed in the wake of the 1916 Easter Rising.  The first significant anniversary for 2019 is the 100thanniversary of the establishment of the First Dáil Éireann (doyle-air-uhn), or Irish Assembly.

In 1917, Eamon de Valera was elected president of Sinn Féin. De Valera set the national agenda when he said, “Sinn Féin aims at securing the international recognition of Ireland as an independent Irish republic. Having achieved that status, the Irish people may, by referendum, freely choose their own form of government.” [Chris, word bubble quote] De Valera began planning for the 1918 elections, assigning Sinn Féin members as candidates, usually to their home counties.

The historic all-Ireland parliamentary election was held December 14, 1918. When the votes were counted, Sinn Féin had won seventy-three of the 105 seats in Parliament (Sinn Féin 73; Irish Party 6; and Unionist 26). In that election, Countess Constance de Markievicz, a Sinn Féin candidate for Dublin, became the first woman elected to the British Parliament.

All of the newly elected Sinn Féin MPs had campaigned that, if elected, they would decline to take their seats in the British House of Commons and instead establish an Irish Parliament based on the republican principles as set forth in the 1916 Proclamation.

On January 2, 1919, invitations were sent from Sinn Féin headquarters to allelected MPs (Sinn Féin, Unionist, Nationalist, or Irish Party) to attend a private meeting at the Mansion House in Dublin on Tuesday, January 7. At that meeting, it was decided that an all-Ireland assembly would be formed.

The first meeting of Dáil Éireann was held January 21, 1919 in Dublin. It was held in the Round Room of the Mansion House (the residence of the Lord Mayor of Dublin). With the establishment of the First Dáil, a united Ireland had its first independent assembly as voted by the majority of its citizens. 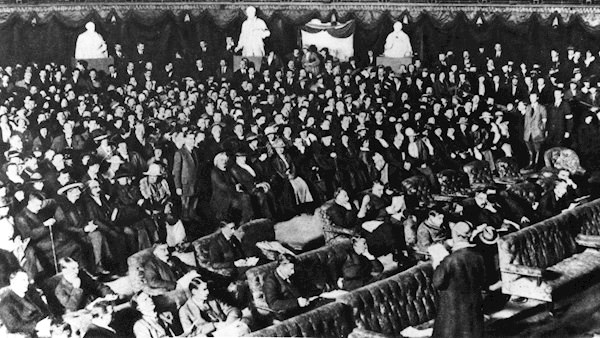 When the First Dáil convened, thirty-four of its members had been imprisoned by the British, having been arrested for violating the Defense of the Realm Act (DORA), or in the words of the act, for “having acted or being about to act in a manner prejudicial to the public safety and the defense of the realm.”

At the roll call of the First Dáil they were officially recorded as “Fé glas ag Gallaibh (fay-glas-ag-gal-iv),”or “imprisoned by the foreigner.” Persons unknown answered the roll call as “present” for two members who were absent. Michael Collins and Harry Boland were then aboard a boat headed for England on a secret mission to organize a prison break that would free Eamon de Valera from Lincoln Jail.

Being the first and highly symbolic meeting, the proceedings of the First Dáil were conducted for the only time entirely in the Irish Language, except for previously drafted declarations that were read in French and English. The Dáil elected Cathal Brugha as chairman, as Eamon de Valera was in prison.  Initially, a temporary cabinet of four ministers was also elected.  Known as the 1stMinistry, they served only until April 1, 1919.

On the same day as the First Dáil met, but in unconnected circumstances, two members of the Royal Irish Constabulary were ambushed and killed by Irish Volunteers (led by Sean Tracy and Dan Breen) at Soloheadbeg in County Tipperary, acting on their own initiative.  This is considered as the beginning of the Irish War of Independence. Shortly afterwards, the Irish Volunteers were renamed as the Irish Republican Army, a force that was nominally under the control of the First Dáil.

The British, meanwhile, sought to destroy the First Dáil’s influence by declaring it illegal in September 1919. In addition, the British also took action on two other fronts: first, a military campaign was conducted to suppress the Dáil and the Republic; and second, a constitutional process was initiated to subvert the will of the Irish people.

The constitutional process consisted of the establishment of the Irish Committee of the British Cabinet, created in October 1919, and heavily under northern Unionist influence. The Government of Ireland Act of December 23, 1920 was the result. Members of the Dáil were slow to realize the full implications of the Act, which dealt a severe blow to the Dáil’s battle for self-determination by establishing the six-county state of Northern Ireland, thereby denying the unity of Ireland that had been secured by the vote of the Irish people.

After the First Dáil was declared illegal by the British, they met only intermittently and at various locations. The First Dáil held its last meeting on May 10, 1921. After the elections on May 24, 1921, the First Dáil was succeeded by the Second Dái,l which was seated for the first time on August 16, 1921.

Today the name Dáil Éireannis used identify the lower house of the modern Oireachtas (irr-okh-tuhss). Thisname refers to both houses of the national parliament of the Republic of Ireland. The upper house of the Oireachtas is known as the Seanad Éireann (sen-ad-air-uhn). Members ofDáil Éireann are known as Teachta Dála(tahx-ta-dahla), or by the abbreviation TD after their name.

SuccessiveDála(plural for Dáil) continue to be numbered from the First Dáil convened in 1919. The current DáilÉireann, elected in 2016, is known as the 32ndDáil. Seán MacEntee, who died on January 10, 1984 at the age of 94, was the last surviving member of the First Dáil. 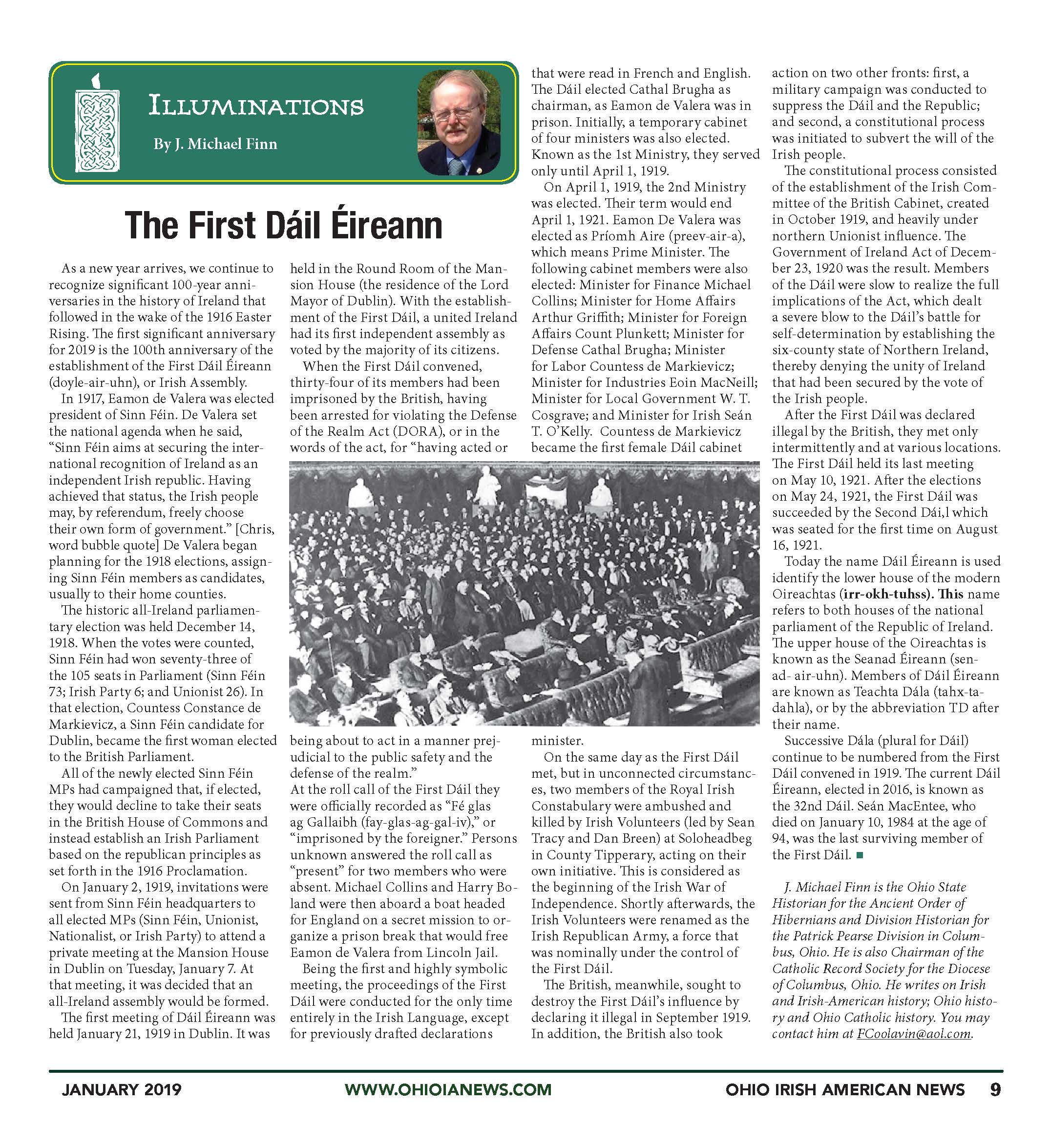