Blowin’ In:  In the Presence of Angels
by Sue Mangan

“It is coming on Christmas.

Singing songs of joy and peace.

I wish I had a river

I could skate away on.”

When I was a child, my mother played the piano.  I still see myself, hiding in the dark, long after she thought I had drifted off to sleep. Concealed in the shadow of our staircase, I could view the colored lights of the Christmas tree and my mother’s silhouette at the piano as she played “Silent Night.”  To me, she appeared as an angel, easing the care from her shoulders, singing softly the age-old carol about the beauty of a mother and her child.

Each Christmas, this image comes to me unbidden by the passage of time. The fairy lights are as bright as ever, and my mother’s voice is crystalline. I once wrote that over the course of one’s life, “memory becomes sense.” We must live through joy and grief to fully understand this metamorphosis, as the two are inextricably entwined.

On New Year’ Eve, amid all the celebrations, there is still a feeling of trepidation in leaving the old year behind and entering in to one that is new. Faith inspires us to accept the unknown with courage and an open heart.

Still, I always think of loved ones that are departed and those who may not be with us when midnight strikes on this same night in the coming year. This time last year, I would never have dreamt that my mother would pass on to that other world, and that the memory of her seated at the piano would change into something more profound.  My mother has become an angel on my journey from grief into all that is light.

My mother, as all mothers do, possessed a litany of advice. One of her greatest phrases was the reminder that “life is for the living.” While others would complain about the cold and snow of winter, my mother quietly relished in the beauty of her snow-covered lake, and the stark white backdrop that the granite skies provided for a scarlet cardinal perched upon the leafless branches of her cottonwood tree. She breathed deeply of the country air as she bent over and picked up autumn sticks.

On her last day with me, despite a recent accident that left her weakened, she bent over to pick up scraps off the kitchen floor. Instinctively protective, I reached out to cradle her stooped form and chastised her for bending down in case she should fall. With utter pride, she told me, “I have been bending. You bet I’ve been bending.” 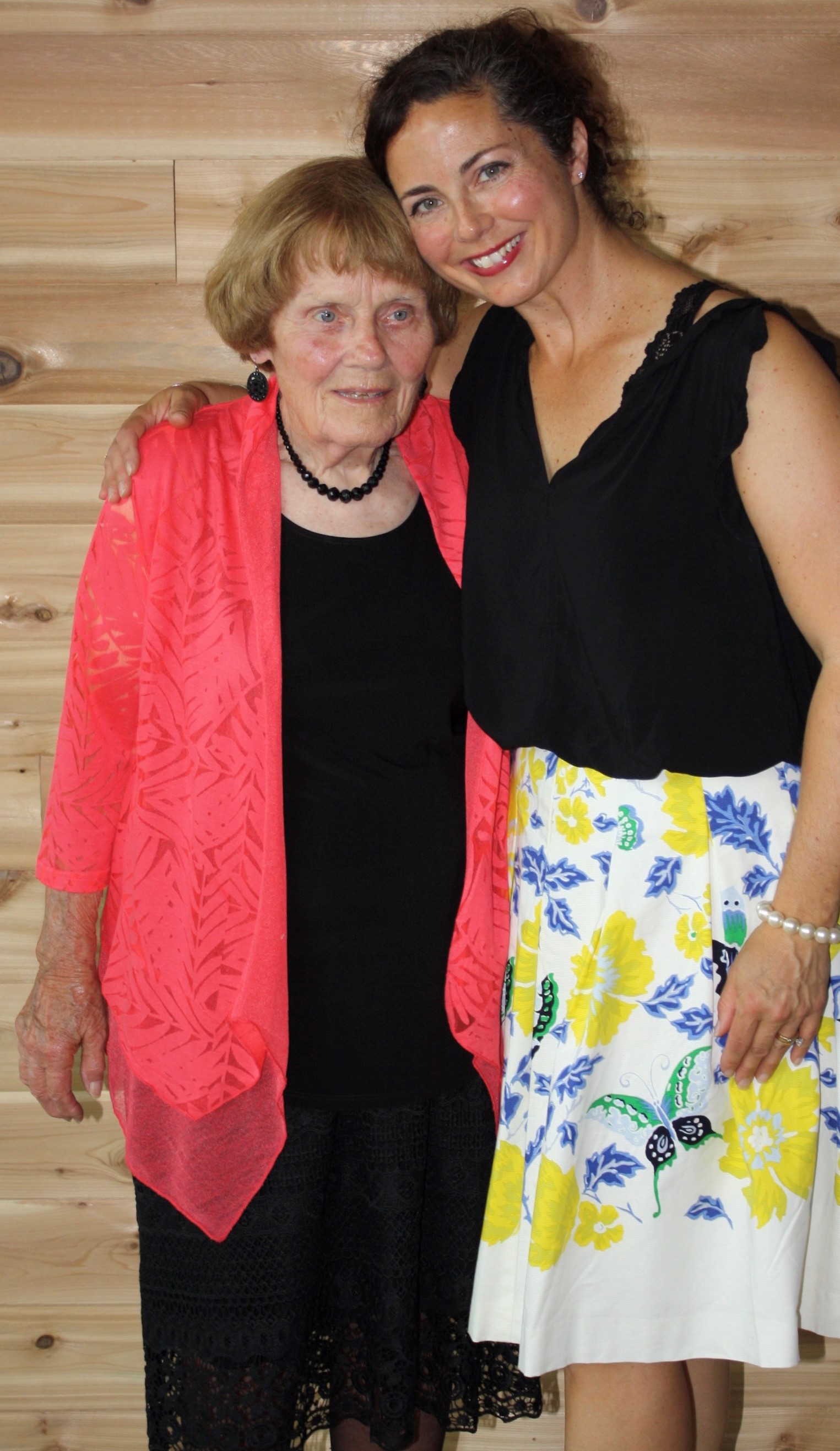 Even though my mother left the rural farm on which she was raised to live in Chicago, and later to retire on peaceful Crooked Lake, her penchant for country wisdom remained. Her words were metaphors for a deeper meaning, a mother’s advice for how I should live my life to the fullest.

On the day she died, I was out shopping at a health food store on what would become the final errand I would run for my mother. Her friend’s son was a yoga instructor and recommended a certain tea that brings wellness and vitality. My mother had been drinking it every day since she took an unwanted tumble into her lake.

The tea would help restore both physical and figurative balance in her life. She gave me the empty packet of tea and sent me back to Cleveland in the hopes of finding a box. On the Monday that she died, I learned there were multiple varieties of the sought-after tea, none of which was the original that she desired. I decided to buy one of each flavor, figuring more is always best.

A certain young man works at this store. To my writer’s mind, he has the blond, curled hair, and otherworldly face of a Baroque angel. He has always greeted me kindly on my regular visits to this store.

He noticed my purchase and asked if I had ever tried this particular brand of herbal tea. I said no, but then in an outpouring of emotion told him the story of my mother’s near drowning and the hope that this tea would be restorative. With great sincerity, he bagged up my parcels and looked me in the eye and said, “I really hope your mother continues to get better and that she enjoys the tea.”

On my way home, I thought about his kindness and the genuine regard in his young, unlined face. At 8:08 that night, my mother sent me a text: “As I am getting ready for bed, I have thought about your blackberry column. I thought it quite interesting. Remind me to tell you about the blackberries that grew in the red clay of southern Missouri.”

Distracted by nightly routines, I did not see her text until midnight. A few hours later, she died at home in her bed after kissing my father goodnight and thinking about wild blackberries.

My mother was not one to shy away from pain or joy. For her, a river stands for hope and new journeys, and a bramble of blackberries is a testament to the ever- evolving gifts that nature offers. Even when river water freezes, spring always promises a good thaw, another chance for renewal, and the likelihood that a barren branch of blackberries will, at long last, bear fruit.

On this New Year’s Eve, I will shed tears for my newest angel, my lovely mother. I will remember the cornflower blue of her eyes and the way they shone when she hugged her grandchildren. I will pray that one day I will hold my own grandchild and see that same beautiful color, the color of the sky in summer, in his or her eyes. I will see her beauty in the new gold of a maple tree in spring. I will remember the picnic lunch we shared beneath a Scottish viaduct along the River Tweed. I will remember her words and treasure her love. My mother is not a memory, but an angel ever-present in my midst. 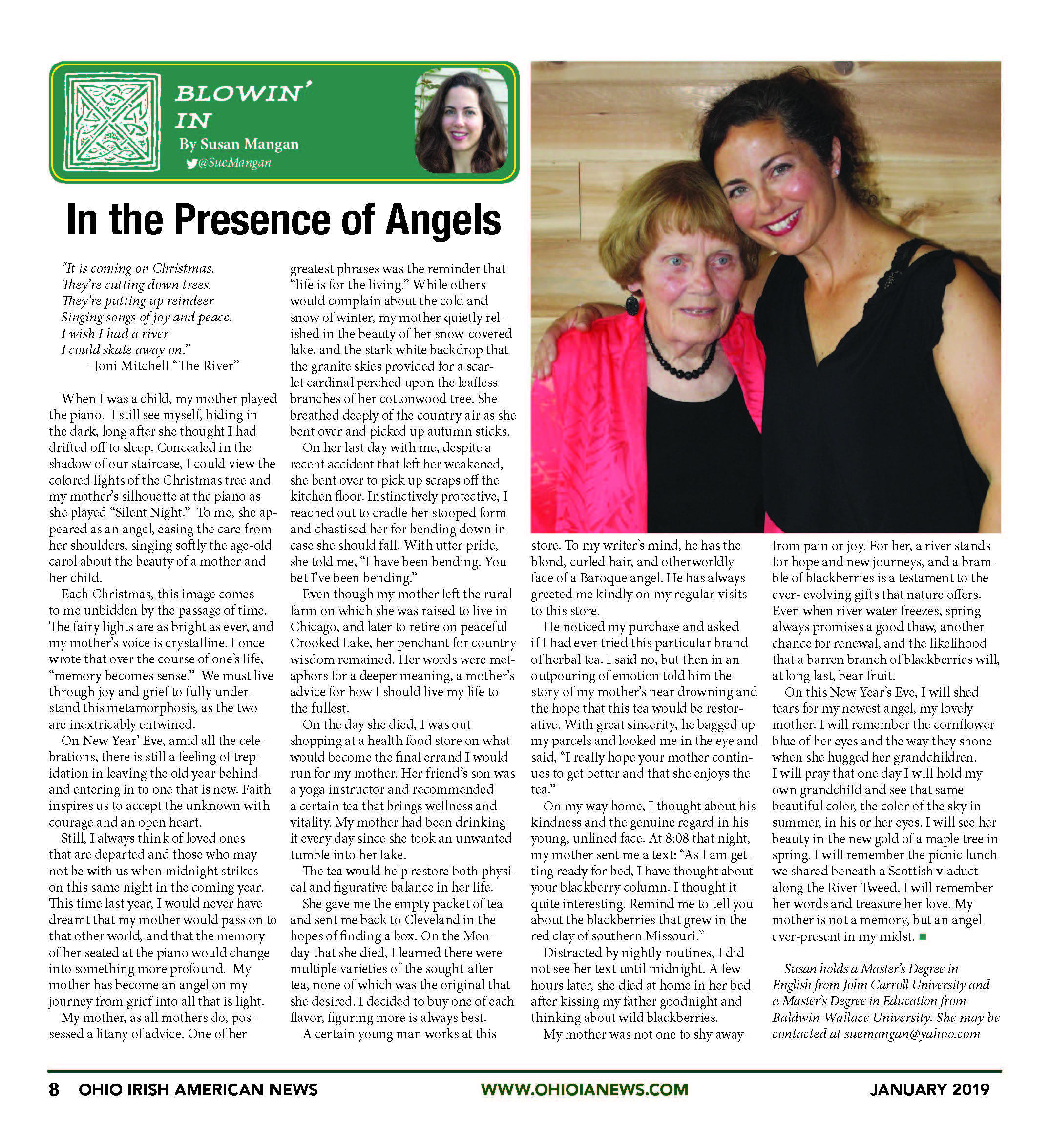 Blowin’ In: Faces of the Mountain