This month’s Off the Shelf column features two books, both by Northern Irish writers. The first, The Vogue, is the second book reviewed in this column by Eoin McNamee, the first was, Blue is the Night. The second book, Northern Heist, is the first fictional book by Richard O’Rawe, and is a blockbuster!

For a contemporary Northern Irish author, the subjects of burned bodies, military conflict and religious indoctrination are hard to avoid. The book begins with the discovery of the body of a young woman in a sand pit who has been unceremoniously interred at Piramill Aerodrome in a place the author spells Morne (rather than the expected Mourne), a fictionalized version of the vast abandoned former RAF based in County Down where British and US servicemen were billeted during allied resistance to Hitler.

Piramill is close to what is now a geriatric rest home, but in ways vital to the story, has previously been a workhouse and orphanage. A time-jump structure switches between 2000, when the corpse is discovered, 1972, the time of the fatal event and 1944-45, where the resolution to the mystery lies.

In the oldest narrative thread, scenes shift Morne and Shepton Mallet, a town in South West England where in a military prison, a black US airman has been charged with capital offenses. The Vogue is the name of the local cinema and a popular dance in one of the featured eras. The jitterbug, though, seems to have influenced the novel’s structure, requiring the reader to keep careful track of the names of the people and places.

McNamee’s skills of concealment and misdirection are neatly employed in The Vogue to hold back until satisfyingly late in the novel what links the second World War, via the 70s, to the brink of the third millennium.

Set against an eerie landscape awash with secrets, The Vogue is a gritty poetic dance through the intertwining stories of a deeply religious community, an abandoned air base, and a long -shuttered children’s orphanage. This writer rates this a TOP SHELF read.

On 19 December 2004, masked raiders took $26.5 million in cash from the vaults of Belfast’s Northern Bank, loaded it on a truck and vanished into the night. The thieves have never been caught nor the money recovered. The investigation remains open.

The second of this month’s Off the Shelf selections is about a fictional robbery, written by a former IRA man and convicted bank robber, Ricky O’Rare.

The IRA was always suspected of pulling off the real robbery, a claim it denied and while it is not involved in the fictional one, it demanded a cut of the proceeds. The mastermind of this story is a character named James “Ructions” O’Hare, a professional thief. Given the authors background, some wonder how much of Northern Heist is fiction?

Posing as police officers, masked men entered the homes of two Northern Bank executives and hold their family’s hostage while the executives gave the robbers access to the bank’s underground vaults. Interviewed about his book, O’Rare stresses that the book is pure entertainment, but he also hoped to capture the reality of violent crime, such as the tiger kidnapping (a tiger kidnapping is a specific act that pairs kidnapping with a second separate illegal activity, in this case the robbery) of the story.

“I’d like readers to really feel the fear of the family that has been held at gunpoint. When that happens, there’s always a fundamental question- will the gunmen actually carry out their threat to commit murder if their instructions are not obeyed?” 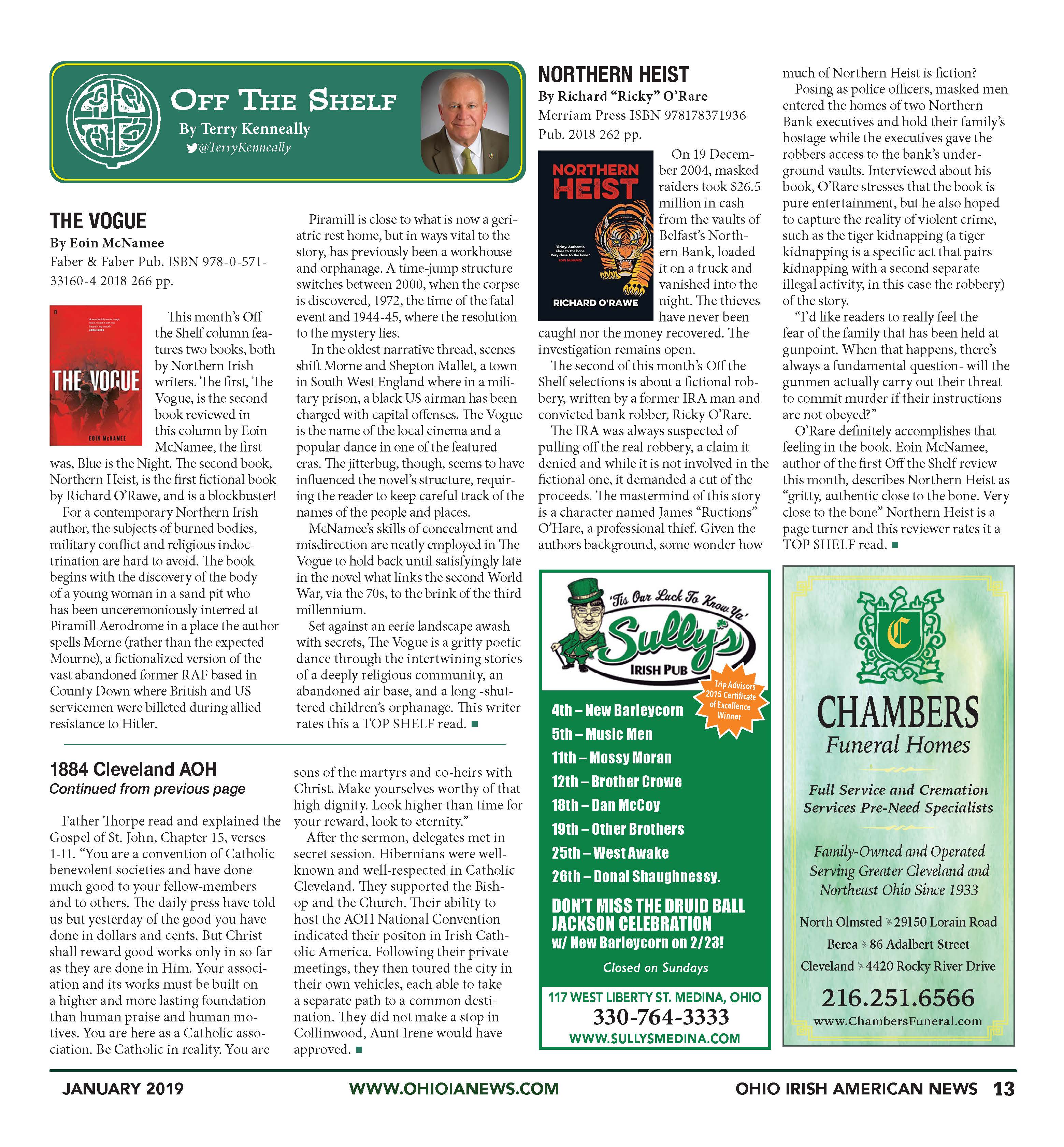 A Conversation with Author Patrick Radden Keefe, by Sabina Clarke

Off the Shelf Book Review: THE ISLANDS

Off the Shelf: DEATH AND NIGHTINGALES, By Eugene McCabe