Together the two form one of the twelve branches of the Indo-European linguistic family. Irish speakers refer to Irish as Gaeilge (gahl-ih-gay), derived from an old irish word for Irishman, Goídel (goy-del).

There are three regional dialects: Donegal, Galway and Kerry, along with an official dialect that was established during the language reform of 1950. That official dialect is what is taught in schools, on-line courses and most self-learning materials.

There are eighteen letters in the Irish alphabet: ABCDEFGHILMNOPRSTU,although you will see the remaining letters of the English alphabet used in “loan words.” Vowels can be long or short, indicated by a mark over the vowel called a fada (fah-da), which means long. Vowels and consonants are broad or slender.

We have no word for yes or no: you can’t havesomething, something will be with you or on you. Sentence structure is common to other European languages, verb-pronoun- adjective.

Spelling can appear confusing at first, but the vowels that appear to be extra or unnecessary are there to aid in the pronunciation of the consonants. In English, there are far more exceptions than rules, in Irish there are few exceptions to the rules.

A fada over a vowel indicates it is a long vowel, and changes its pronunciation will also change the meaning of the word. For example, briste (brih- shta) means broken, and bríste (bree-shta) means pants.

The vowels are also grouped into two types, broad and slender. An a o and u are broad, while e and i are slender. Whether the vowel is broad or slender affects the pronunciation of the consonant next to it. The spelling rule: Leathan le leathan agus caol le caol (leh-hin leh leh-hin ah-gus keel le keel) is broad with broad and slender with slender; it keeps pronunciation consistent.

Typically, broad consonants are pronounced as they would be in English, with exceptions in the letters d and t. Slender consonants can be a bit trickier to pronounce. They can be pronounced the way they might be in English or with a very faint “y” sound at the very end. For example, in the word beo, which means alive,  the b is slender because it is next to e, a slender vowel; the word is pronounced b-yeo. In the guide below, notice the exceptions to the slender pronunciation in the letters d, s and t.

The beginnings of Irish words can be changed by words that precede them. These changes can be very confusing at first, but with practice become quite natural. In séimhiú (shay-voo), or lenition, an h is added after the first letter of words starting  with the following consonants and change the pronunciation of the letter: b- bh(v or w), c-ch (ch as in loch), d-dh (y), f-fh (silent), g-gh (ch as in loch), m-mh (w), p-ph (f), s-sh (h), t-th (h-yah).

Urú (uh-roo), or eclipsis, involves adding a letter before the first letter of words starting with the following consonants. These changes are easier to pronounce as the eclipsing letter takes over the original first letter: b-mb, c-gc, d-nd f-bhf (silent),  g-ng, p-bp, t-dt. For now, just be aware that these changes exist and how they change pronunciation, we’ll get into when and why later. Also be aware if you are having difficulty looking up a word in the dictionary, try looking it up without the h if that’s the second letter or dropping the first letter, the word you’re looking for may have been lenited or eclipsed.

In Irish stress is usually placed on the first syllable. In Kerry, the dialect in the south of Ireland, stress is on the second or third syllable.

A dictionary is essential in your study of Irish, one of the best also happens to be available free on-line @teanglann.ie. Along with the translation of a word, there are grammatical examples and an audio pronuciation guide in the three regional dialects. You can easily add the link to your hompage on your smartphone or computer.

Numerous children’s books are available in Irish and are a good way to build comprehensive reading skills in Irish. The best tip I can give when it comes to Irish pronunciation is to listen and practice.

*Bob Carney is a student of Irish history and language and teaches the Speak Irish Cleveland class held every Tuesday @Pj McIntyre’s. He is also active in the Irish Wolfhounds and Irish dogs organizations in and around Cleveland. Wife Mary and hounds Cian and Morrighanand terrier Doolin keep the house jumping. He can be con 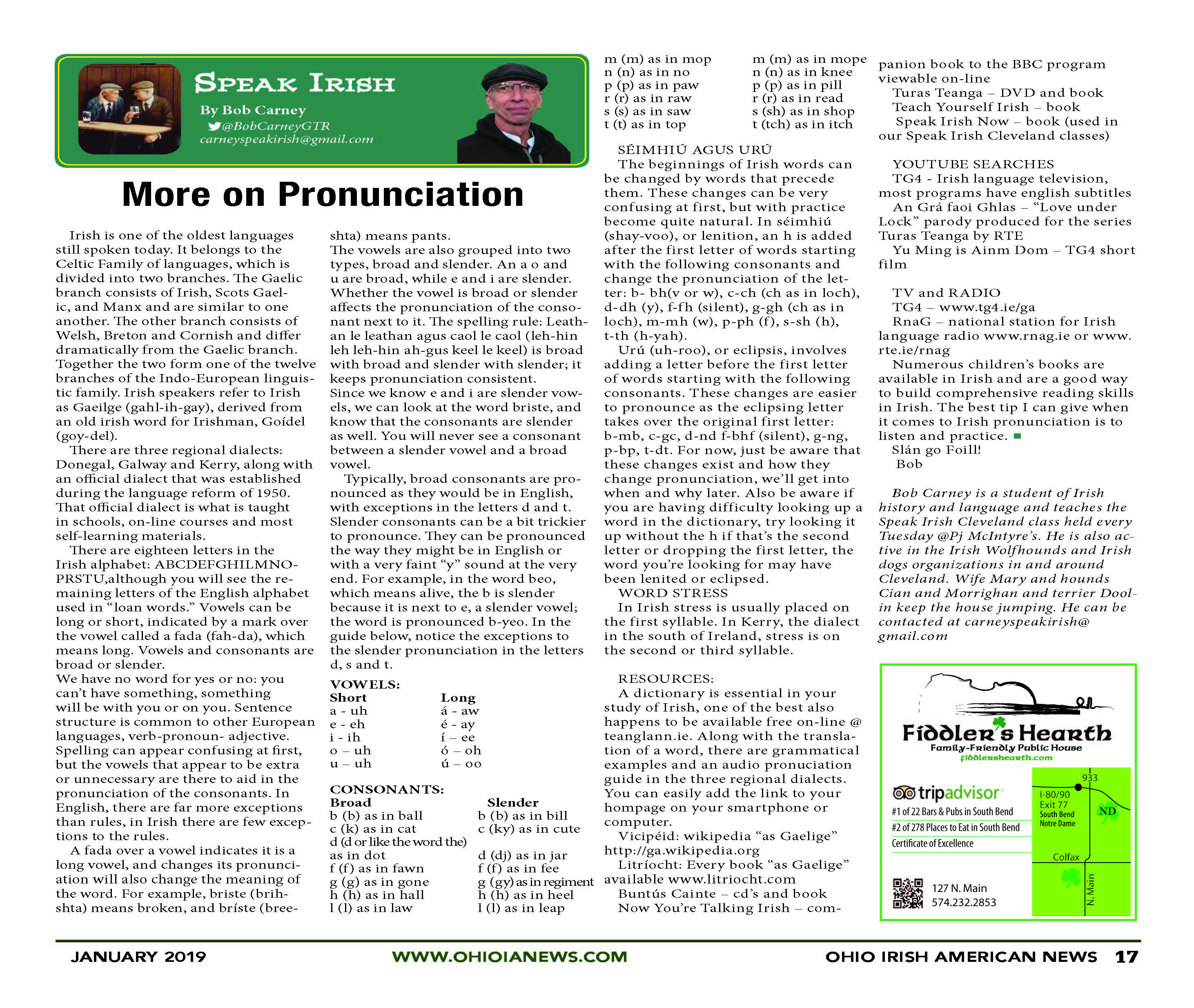 Now Is the Time to Implement Irish Language Legislation