Terry from Derry: All in Jest - News and Events - Ohio Irish American News

Terry from Derry: All in Jest
by Terry Boyle

They are very friendly, seems to be a catch phrase for most people when describing the Irish.  No doubt there is some truth to the Irish charm, the smiling eyes etc.  But as much as it seems cliched, and stereotypical, it’s also complimentary.

It’s certainly preferable to the more negative side of the caricature, the Irish drunk. Wherever I go, I rarely hear anyone say anything derogatory about the Irish.  We seemed to have conquered the world with our witty sense of humour; especially at times of real tragedy.  Nothing seems to dampen our need for a laugh and this is a gift.

People know us for our musicians, dramatists, poets, writers and of course dancing.  For a small country, we have made our impression.

In the 80s, I would be frequently asked about the Troubles.  How could such friendly people end up fighting each other; a question that required an extensive and overbearing lesson in Irish history that had no guarantee of satisfying the questioner.

In the 90s, it was the Celtic Tiger. Ireland, was now a ferocious money-making animal, capable of leading the way towards a bright and prosperous future. For the first time, Ireland was a honeypot that attracted people in need of work. The new millennium saw the notorious financial crash with its subsequent austerity measures.  Our ascension, and dramatic fall from prosperity was on a par with Icarus himself.

Now, when people think about Ireland, it’s Brexit.  Have you ever tried to explain the complexities of the UK’s decision to leave Europe?  If you thought explaining 800 years of history under British rule was too in-depth, too complicated for the beginner, then try explaining Brexit.

For two years running, I’ve been part of an esteemed panel put together to break down in easy to understand language the latest news on Brexit.  Such a challenge is, as you can imagine, fraught with great problems.  If you simplify for ease, you lose the more complex nuances of the situation, or if you complicate the subject to the point of abstraction, the audience is lost.

My Jewish friends say, ‘two Jews, three opinions.”  Everybody has their take on what Brexit means.

Indeed, the many faceted sides of the British divorce from Europe is much akin to a Beckett play.  You can say anything about it without being absolutely wrong or absolutely right. Everyone has an opinion, usually based on their own political bias. To quote Joyce’s Stephen inUlysses, Brexit is the ‘nightmare from which we are trying to awake.’

Most people would agree that the referendum to leave Europe was poorly orchestrated.   Voters were ill-informed as to what they were voting for and reacted to fear mongering. However, the deed is done, and now we are faced with the inevitable reality that such decisions to ‘uncouple’ do not happen quickly.

Separation affects more than one party.  There are financial repercussions, and repositioning of future relations between those parties involved. It is somewhat funny that the sticking point to separation, ironically enough, is Northern Ireland.

Since the peace agreement of 1998, the Republic of Ireland and Northern Ireland have enjoyed a fruitful relationship.  Cross-border security, trade, and movement of people has continued to unite the two separate parts of the country in ways that has been a beneficial to the island as a whole.  So much so, that any discussion of resurrecting a hard border would jeopardize the good relations between the two countries.

A hard border would be retrogressive, and would undo all the good work of the peace agreement.  So, with the date of separation, March 19, looming, there has been a lot of shuffling back and forth between the UK and Europe regarding the future Ireland.

No border would ensure the unchecked movement of people, something the UK wants to curb.  A checkpoint between Northern Ireland and Britain would mean treating British province differently to other parts of the UK, something the Unionists refuse to endorse.

So now, where are we in all of the endless discussions?  Again, I reiterate, it’s anyone guess. The recent tentative agreement is proving to be yet another false claim of progress.  For, when there is one step forward, two backward steps follow in succession.

In such a climate of uncertainty, old loyalties are bared.  Nationalists continue to question the legitimacy of the Northern Irish State, while Unionists hold fast to the ‘no surrender’ policy of earlier years.  The stalemate between the two communities that had softened after the Good Friday Agreement has become more pronounced as the finger-pointing continues to exacerbate fears on both sides.

Needless to say, even with such polarization there is always one constant, the Irish sense of humour.  Give us an enigma of colossal proportions and we will find a way of poking fun at it.  I think it’s to our credit that no matter how much life takes us seriously, we find a way to lighten its grip.

There is no way to describe the unflappable humour of the Irish.  Its sacrilegious, rich in wit, and devastating to those who would ruin a good joke with sobriety.  When Heaney, reacting to the English press and their jaundiced view of the Northern Irish violence, writes, ‘Yet I live here, I live here too, I sing’, he demonstrates the Irish love of life.

My Jewish friend also shared this sentiment about the Jews, ‘theytried to kill us, we survived, let’s eat.’  I love the humour; desperate times require comedy.

We cannot sustain or survive on a diet of parliamentary debates that end up in the same cul-de-sac.  Humour keeps us sane.  We need to reminded that life is for singing, laughing, and enjoying.

*Terry Boyle is a professor at Loyola University, Chicago.  He writes and reviews plays, while also teaching modern Irish and English drama.  Moving from Derry, N. Ireland to Chicago in 2004, he continues to enjoy is work with the Irish American community.  He can be reached at tboyle1@luc.edu 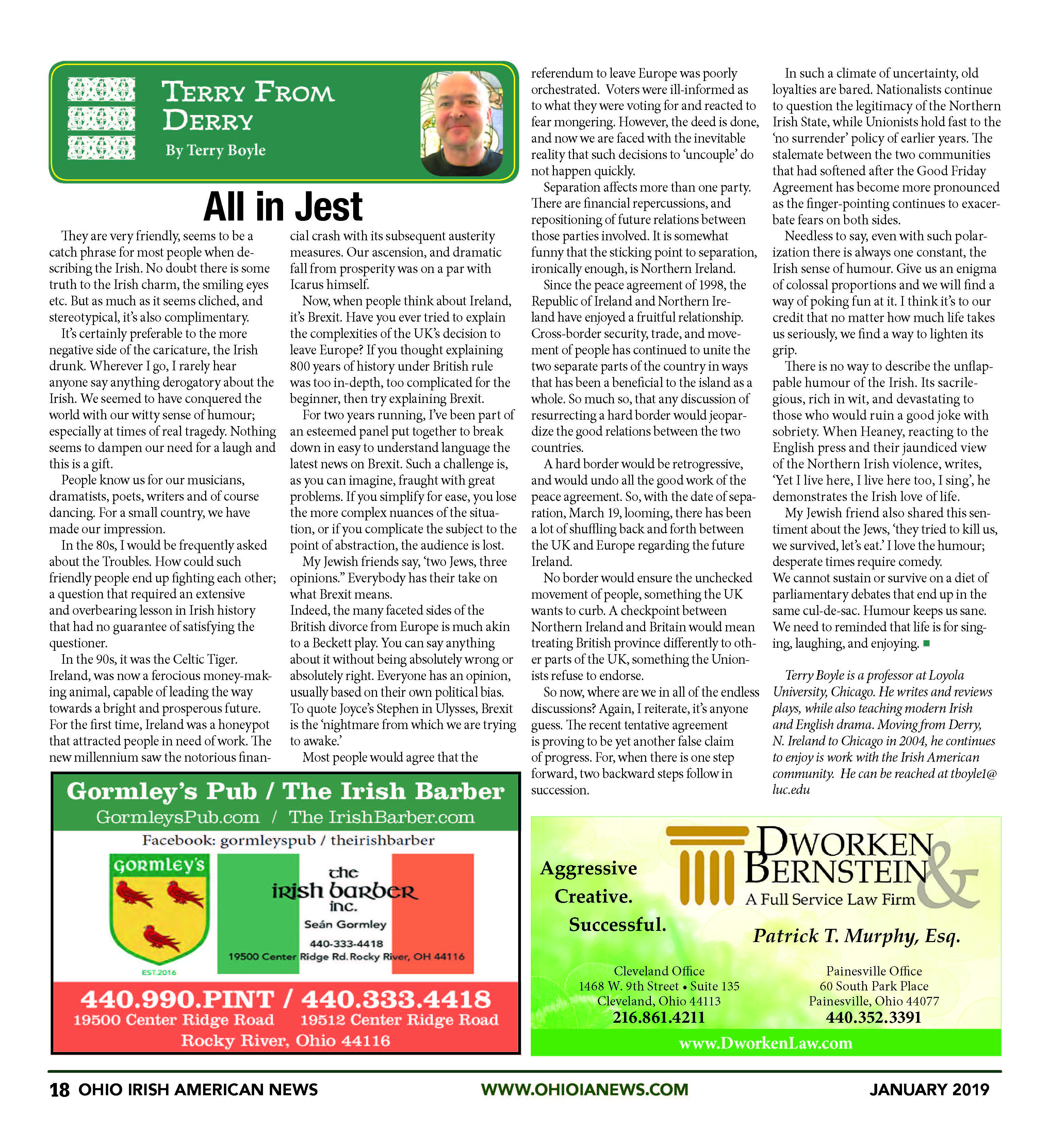 Terry from Derry: Taking the Secret Out of ‘Open Secret’: Here’s My Story

Terry from Derry: Hunkering Down