When Irish Eyes Are Smiling
by Maury Collins

A lady walked in to find her husband standing on the bathroom scale, holding his stomach in: “That won’t help” she said.
“Yes it will,” her husband responded, “that’s the only way I can see the numbers.”

The graveside service had just barely finished when there was tremendous bolt of lightning and a massive clap of thunder, followed by even more thunder rumbling in the distance. The little old man looked at the priest and calmly said, “Well, she’s there.”

My doctor charges forty dollars for a house call – more if he has to dial the number himself.

The Priest was writing the baptismal certificate and trying to remember the date, “Let me see, this is the thirtieth?’
“Indeed not,” said the indignant mother, “It’s only the eleventh”

O’Toole worked in the lumber yard for twenty years, and all that time he’d been stealing the wood and selling it. At last his conscience began to bother him and he went to confession to repent. “Father, it’s 15 years since my last confession, and I’ve been stealing wood from the lumber yard all those years.”
“I understand my son,” says the priest. “Can you make a Novena?”
O’Toole said, “Father, if you have the plans, I’ve got the lumber.”

Tucker wakes up one morning to find a bear on his roof. So he looks on the internet and sure enough, there’s an ad for Bear Repellent. He calls the number, and the bear repellent says he’ll be over in fifteen minutes. The bear repellent arrives, and gets out of his van. He’s got a ladder, a baseball bat, a shotgun and a mean old Doberman.  “What are you going to do,” Tucker asks?
“I’m going to put this ladder up against the roof, and then I’m going to go up there and knock the bear off the roof with this baseball bat. When the bear falls off, the Doberman is trained to grab his testicles and not let go. The bear will then be subdued enough for me to put him in the cage in the back of the van.”  He hands the shotgun to the Tucker.
Why did you give this shotgun to me?” asks Tucker.
“If the bear knocks me off the roof, shoot the dog.”

An old man is having a drink in a bar. Suddenly a gorgeous girl enters and sits down a few seats away. The girl is so attractive that he just can’t take his eyes off her. After a short while, the girl notices him staring, and approaches him.
Before the man has time to apologize, the girl looks him deep in the eyes and says to him in a sultry tone: “I’ll do anything you’d like. Anything you can imagine in your wildest dreams, it doesn’t matter how extreme or unusual it is, I’m game. I want $100, and there’s another condition”.
Completely stunned by the sudden turn of events, the man asks her what her condition is. “You have to tell me what you want me to do in just three words”
The man takes a moment to consider the offer from the beautiful woman. He then whips out his wallet and puts ten – $10 bills in her outstretched hand. He then looks her square in the eyes, and says slowly and clearly, “Paint my house.” 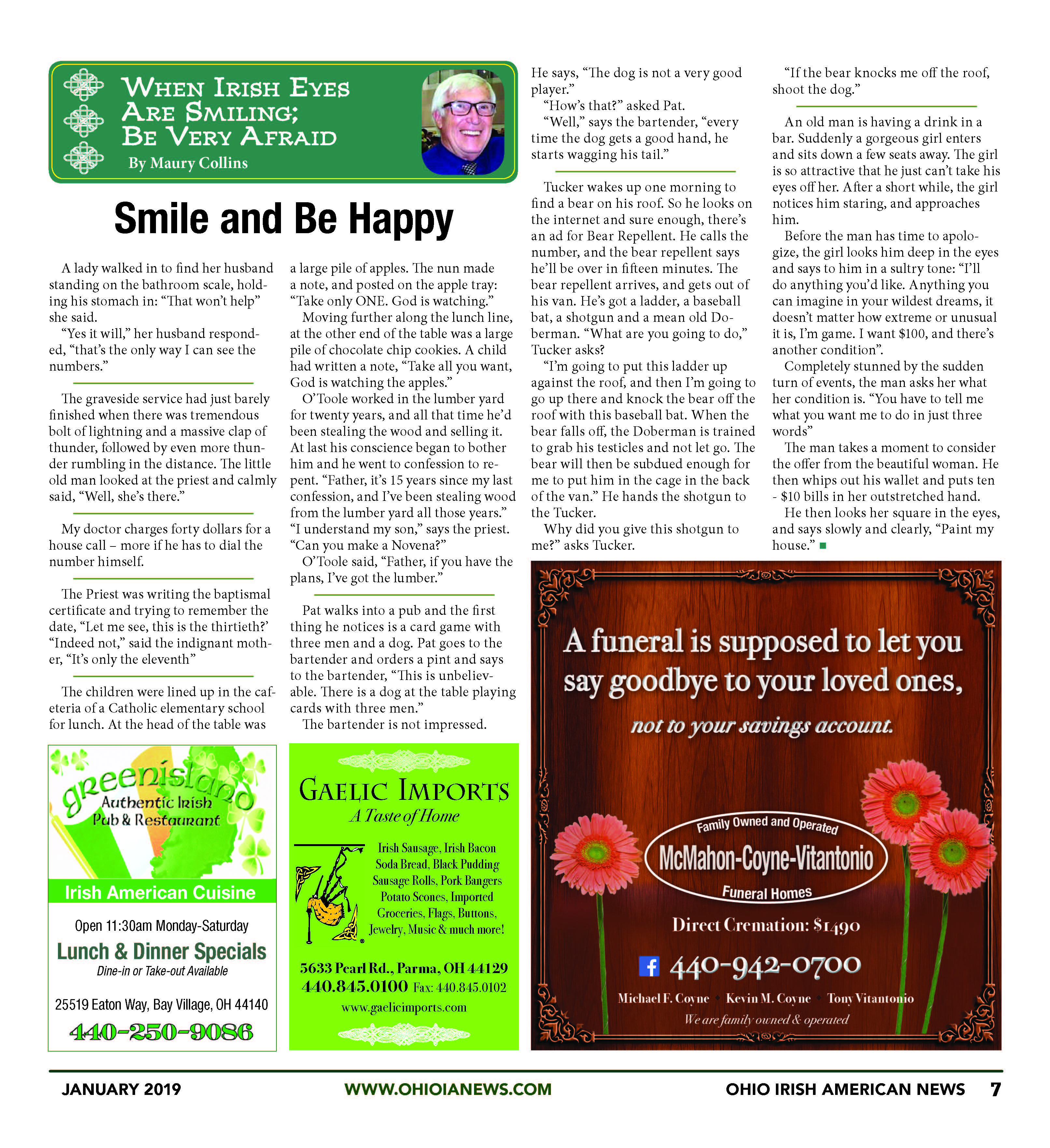 Out & About Ohio January Events Listing

Jokes: When Irish Eyes Are Smiling …