God understands the weary. Two days after Christmas, I got a text from Brendan Gorman that George Dunne had passed away.  I was so sure he was mistaken, George was only 52.

I have known George Dunne, Jr. for all of our lives.  Born six months apart, I have memories of George Jr. and I, John Jr., climbing over penalty boxes at Winterhurst and kicking a Gaelic football at Gunning, or just getting in trouble, while watching our dads,  George Sr. and John Sr. play broomball or Gaelic football; I don’t think we had entered grade school yet.

George got yelled at more often, or maybe I left the hearing aid at home. I remember how powerful George Sr was, built like a mac truck, and Sara racing onto the field at Gunning, whacking a Chicago player over the head with her purse repeatedly as he stupidly tried to fight George Sr. Always a losing proposition, for with the Dunne’s, loyalty trumps all, and taking on one, was taking on a whole army.

I remember George Sr. sitting in my house in Medina, talking about life, and that laugh popping out after the quick squint of the eyes, that were a clue he was teasing. George Jr. shared so many traits with his dad – but the loyalty is the one that I associate most.  I never doubted he was just a call away. That loyalty manifested itself in his support of most everything Irish; Aislinn, The IRA, Gaelic football, freedom for Ireland, music, his friends and family, and luckily, me.

Fr. Pat called George a peacemaker at the funeral. That got a chuckle. I suppose he was, later in life. But the indomitable spirit that fired through him in life, didn’t suffer fools or fake news.  George was the brother I never had, a friend who never wavered, and a constant staunch supporter, who refused to be any less than that, ever. 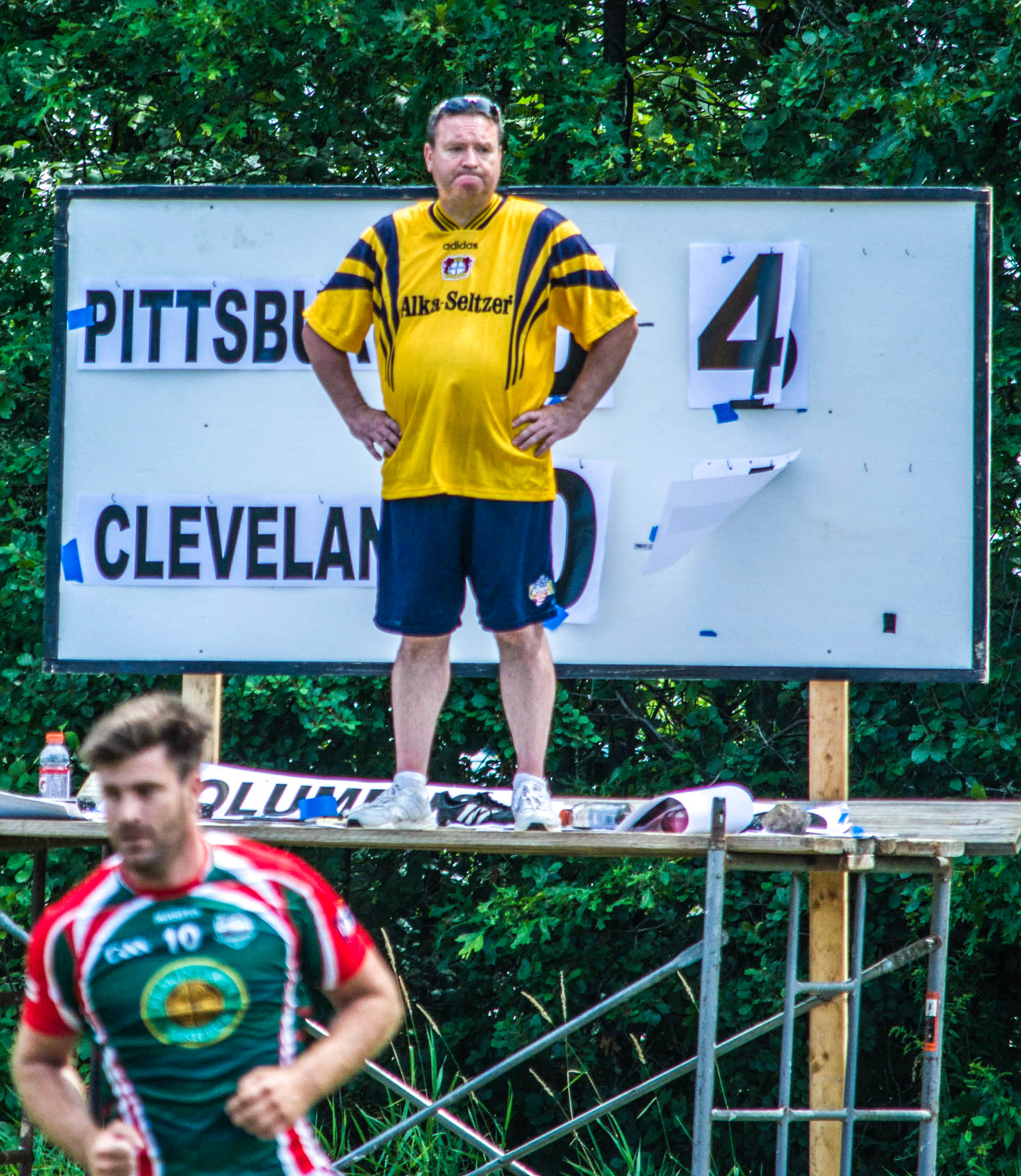 He always greeted with me with, “Johnny, How the hell are ya?”
And said goodbye with a handshake and, “Keep the Faith.”

As I held my place in the Honor Guard of former Saints Patrick’s & Jarlath’s players, and Georgie was carried out in the arms of his brothers, nephews and family, I thought of George Sr. waiting, sitting with legs stretched out and crossed, hands interlocked on his stomach, waiting to meet Georgie at The Gate. Jr. was going home, and waiting with a hug, a and a few warm pats on the back was dad …

“Ahh Georgie, you came too early Son.  It’s good to see you.”

Safe Home my friend.  Watch over us.  For always George, you are just a thought away.

(When the music stops, so does the dance)

*John is the Publisher and Editor of the OhioIANews.  A 1stGeneration Irishman, born in Cleveland, Ohio, he is the author of 4 books and volunteered at Cleveland Irish Cultural Festival for 36 years before retiring after his and the festival’s 36thyear, in 2018.

“Follow me where I go, what I do and who I know;

Congratulations to 2019 Walk of Life Award Winners Vera Casey, Charlene Crowley, Sean Hardy, Jim McMonagle and Chris Ronayne ~ our community is so indebted and grateful to you for all that you do.

Congratulations to OhioIANews Columnist Marilyn Madigan, elected to the 2019 Class of the Cleveland International Hall of Fame! 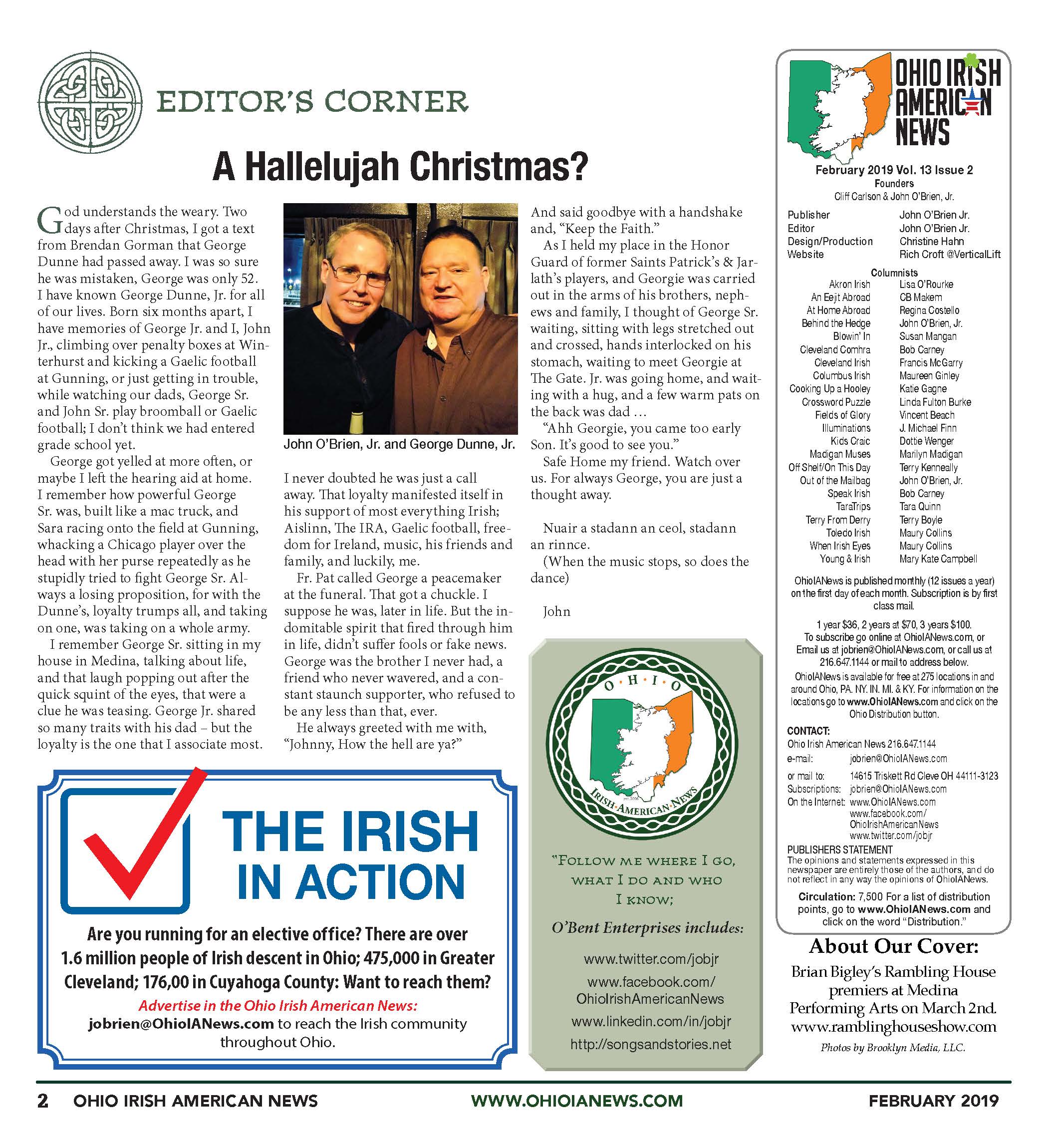