Akron Irish: In the DNA
by Lisa O’Rourke

From a distance, the landscape was pretty unremarkable; a solid gray winter day on a small farm of thirty-five acres, a white bungalow and some utility sheds. It could have been in just about any hard scrabble rural area anywhere.

As the camera zooms in, that sense of the unremarkable swings in the other direction. It is chaos, the cell phone footage is shaky and when it zeroes in on the center of the action, you see a middle-aged men being wrestled to the ground by more middle aged men, although the second group is dressed for action and don’t look like this is their first time at this type of thing.

The camera pivots to another man being pinned to the ground in the driveway. There is angry shouting. One man who is shouting, certainly one of the men filming the scene and clearly hoping to shame those other men out of their actions, says something to the effect of how they should be ashamed of themselves, that these men on the ground are their own people, and how could one Irishman put another out of his home and on the street right before Christmas?

One of those officers of the bank looks stonily at the cell phone camera and states that he is not Irish, he is British. It could have been a statement of pride or defiance. Maybe he meant that he was proud of his heritage too, that he would not do this to one of his own, or that he was angry and not Irish, but that comment stopped the collective breath of the confrontation; it seemed to change the energy, and not for the better.

What that man did with those words and that attitude was summon the ghosts of 1847 more surely than any Ouija board could accomplish. For those words were said in Strokestown, Co. Roscommon, a few miles from the Irish Famine Museum. It is not a place that forgets much.

Strokestown is in the Midwest of Ireland. It is a place that has been relatively untouched by prosperity or immigration. If you live there, it is because your people have lived there for generations. That is not just speculation but has been confirmed by some ancestry studies with geneticists finding some of the most unchanged DNA in Europe in that area.

Strokestown was not chosen to be the site of the Irish Famine Museum randomly. County Roscommon was hit hard by the Famine, and may have never fully recovered. Strokestown Park House was occupied during that time by the Mahon Family. Denis Mahon was a British landlord who distinguished himself by sending some of his tenant farmers to their deaths, making them emigrate on some of the most infamous coffin ships of their time.

He was repaid for his efforts by becoming the first landlord to be assassinated during a famine uprising. So, if you live there, odds are good that you are a product of generations that have lived there and have that history burned into your DNA.

People there have changed with the times, but still hold on to much of the rural traditional culture. While the area has been a lone holdout regarding some of the societal reforms like gay marriage, they are also people who cling ideas like helping each other, hospitality and treating your neighbors like family.

On December 11, 2018, black clad, quasi- military types descended on a house in Strokestown, Co. Roscommon with the sole purpose of removing the residents from their home and repossessing it for a Belgian bank, KBC.  It couldn’t have been much of a surprise, because there were plenty of bystanders wielding cell phone cameras in the yard. There is no question that the family, three middle-aged siblings, two brothers and a sister, owed the bank money. What has not been made clear is what the source of the difficulties was or what type of bank or loan was involved. What is clear is that what was captured on the phones was heartbreaking.

An elderly man was thrown to the ground and removed forcibly from his yard. Neighbors attempted to help him, but they were threatened and manhandled. The flinty looks of the men removing those hapless people forcibly and then that blunt comment on nationality, recalled the worst moments of famine, and the loss that still haunts residents, especially in these small rural areas that were so badly affected in the first place.

That comment also led immediately to the question, who are those guys? It turned out that they were former British military men, some stationed in the North. They came a hundred and fifty years later, to carry out evictions based on foreign orders, two weeks before Christmas. It was the handling of the thing that pushed so many buttons for local residents.

So much so, that less than a week after the well-publicized eviction, people acted. A band of people ranging from twenty to fifty in number, depending on reports, stormed the house now occupied by the men who carried out the eviction. The gang brought with them petrol bombs, bats and clubs. They burned out four transport vehicles, killed the two dogs that were set on them and carried out an eviction of their own.

The hired guns were run from the house and without the benefit of much on to keep them warm. They were warned not to return. There have also been pickets and boycotts of the bank, both in Roscommon and nationally, which seems fairly culpable in this event as well.

Recently there have been protests in other places, linked to the diminishing middle class. This one felt more authentic.
The reprisal, while not nice or legal, was not carried out by hooligans looking for a cause. It was done by neighbors who took it personally when they saw the harsh treatment of their neighbors. Someone said that they felt that if they allowed this to happen, “then who are we?”

This eviction was personal, small and specific. In a city, if this had happened, it would have seemed different. At times, when we don’t know our neighbors, we diminish their problems as acts of their own foolishness, as a way to manage our own anxiety.  We want to think that we are cleverer than our faceless peers because it makes the world a less scary place for us. It is at the expense of who we are sometimes.The overarching lesson of this story, as illustrated by those former military men, is that those who don’t remember history may be doomed to run the streets in their underpants.

Lisa O’Rourke is an educator from Akron. She has a BA in English and a Master’s in Reading/Elementary Education. Lisa is a student of everything Irish, primarily Gaeilge. She runs a Gaeilge study group at the AOH/Mark Heffernan Division. She is married to Dónal and has two sons, Danny and Liam. Lisa enjoys art, reading, music, and travel. She enjoys spending time with her dog, cats and fish. Lisa can be contacted at olisa07@icloud.com.

Please send any Akron events to my email! 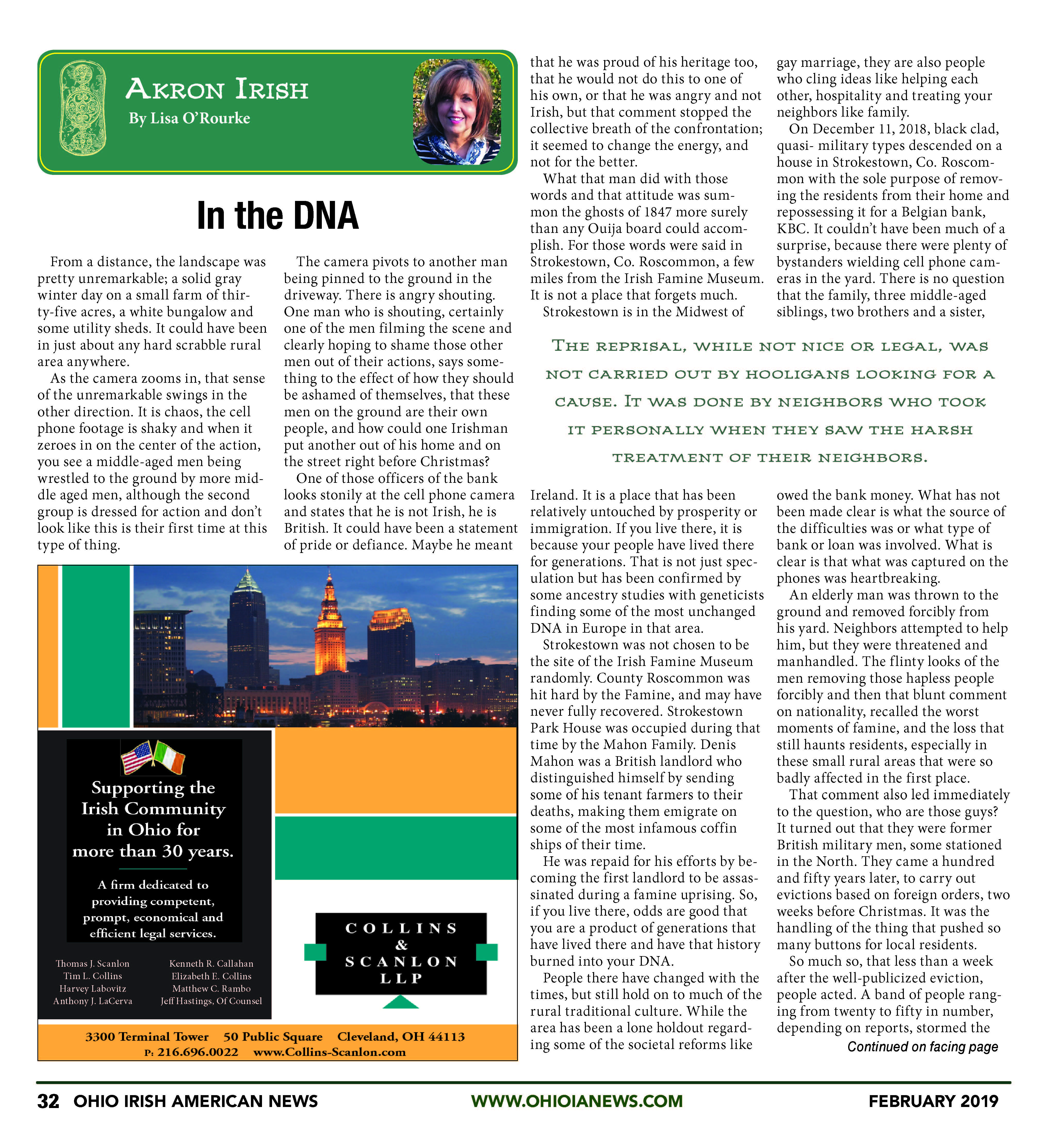