An Eejit Abroad
By CB Makem

I think there’s one thing on which we can all agree, and that’s that the Ohio Irish American News has been lacking a column on Transylvania for quite some time. I blame it on the Sports Department, but then again, you can pretty much always point the finger at them and most people would just agree and say, “Well, that’s no surprise.”

When our editor asked me why I wanted to focus on Transylvania for my premiere column, I asked, “Wasn’t Dracula set in that region of Romania?” And he conceded the point. Then I further inquired, “And wasn’t it written by Bram Stoker?” To which he replied, “It was.”

And then I nimbly argued, “And wasn’t Bram Stoker an Irish-American?” And he answered, “I’m pretty sure he was just Irish.” And I concluded the discussion with, “Well that counts.”

And so here we are. Ready to set things right. And no, I shan’t be mentioning Bram Stoker again, so if that’s what you’re looking for, you’re out of luck. You see, the other half and I jetted off for a three-month adventure to Romania, and though I have plenty to say about Ireland and America, it creates a bit of suspense, doesn’t it, to save those places for a later column.

We flew into Sibiu, a beautiful and historic city of just under 150,000, on our way to a town an hour west called Sebeș. Now Sebeș is the kind of place that when an immigration official asks how long you’re staying and you say “90 days,” and he asks where you’re staying, and you say “Sebeș,” he’ll repeat the town name as if he’d just watched a contestant on the Price is Right bid on the dishwasher over the second and always better showcase.

To make matters worse, Libby was flying on an American passport, and I—following her directly—was on an Irish one. Now he’s looking at the pair of us, purportedly from two different countries staying three months in a town that, for all I knew, was Romanian for stay away: botulism capital of the world. As you can guess, it didn’t go well.

He called over a supervisor who proceeded to rummage through every nook and cranny of our luggage, taking his sweet time as the airport was swiftly closing all around us. “What’s this?” the head cheese asked at one point. “That’s a letter from an 84-year-old woman in Texas. I was going to write her back.” I jest not, he proceeded to read the letter from stem to stern, a respectable feat, as it was exactly the kind of letter you’d expect from an 84-year old woman in Texas.

Then he ran across my notebook, which was emblazoned with a Star Fleet insignia and the words “Captain’s Log.” He was even more interested in this tidbit than the Lone Star State correspondence. “What’s this?” he asked, as if he’d finally found the conspiratorial crown jewel. “It’s a … um … notebook.” “Pretty fancy notebook,” said he condescendingly, as if I should be ashamed by my high fallutin’ galactic novelty. I shrugged, and though I wanted to assure him I wasn’t really a Star Fleet captain, I held my tongue, because he didn’t seem like the kind of person who found anything funny unless someone got hurt.

And then he hit upon my American passport. Holy cow, I thought we were going to be turned away, left to stew like a couple of replaceable ensigns in an empty airport until ejected on the next flight out in the morning. I was pretty sure an Irish citizen could visit other European countries freely, but I’ll be honest, I’m not an immigration attorney, and I don’t think this man would have listened to one anyway.

By the end of our ordeal, the entire customs and immigration detachment of about a dozen was watching the entertainment, all seeming to want to get home (the airport had been shuttered for 40 minutes) and I got the feeling our supervisor friend pulled this kind of stunt a lot.

A neighbor in Sebeș later informed me that that kind of behavior was not uncommon among some people with power, but he was the only overzealous authority we met in our travels.

The first agent, who was a very nice fellow, called us a cab—an awfully nice thing as we didn’t speak Romanian and the front of the airport had as much activity as a town at the end of a Clint Eastwood movie.

We stayed the night in Sibiu, which was named Europe’s cultural capital in 2007. The old town section, where the hotel was located, was named by Forbes as Europe’s 8thmost idyllic place to live in 2008. Its cobbled, and pointedly Germanic, 600-year old large square was filled with energy, and not a single person asking for trouble, exactly what we’d been hoping for.

Our stomachs were growling the next morning, but most restaurants don’t open before 9 or 10 a.m., so we loitered as best we could, stopping in to a charming basement book store with brick walled arches, an inviting coffee counter, a small English section and Sibiu postcards. We loaded up and strolled the cobbled streets and grand squares, awed by the beauty.

Wandering in to a place called Café Wien a little after 10, we seated ourselves in a cozy room and a kindly waiter brought us menus. I can tell you that you might as well ask for unicorn sausages as a full-Irish breakfast in Transylvania. You can choose omelets or cold meat and cheese, and if you’d like, they’ll provide bread, which apparently no one in the country has thought of combining with butter. Libby ordered the eggs and coffee. I chose the meat and a cup of tea. “What flavor tea would you like?” the young man asked in much better English than anyone on Keeping Up with the Kardashians. “I’ll take tea flavor, thank you very much,” I replied.

“If that’s the color they’re making it now.” 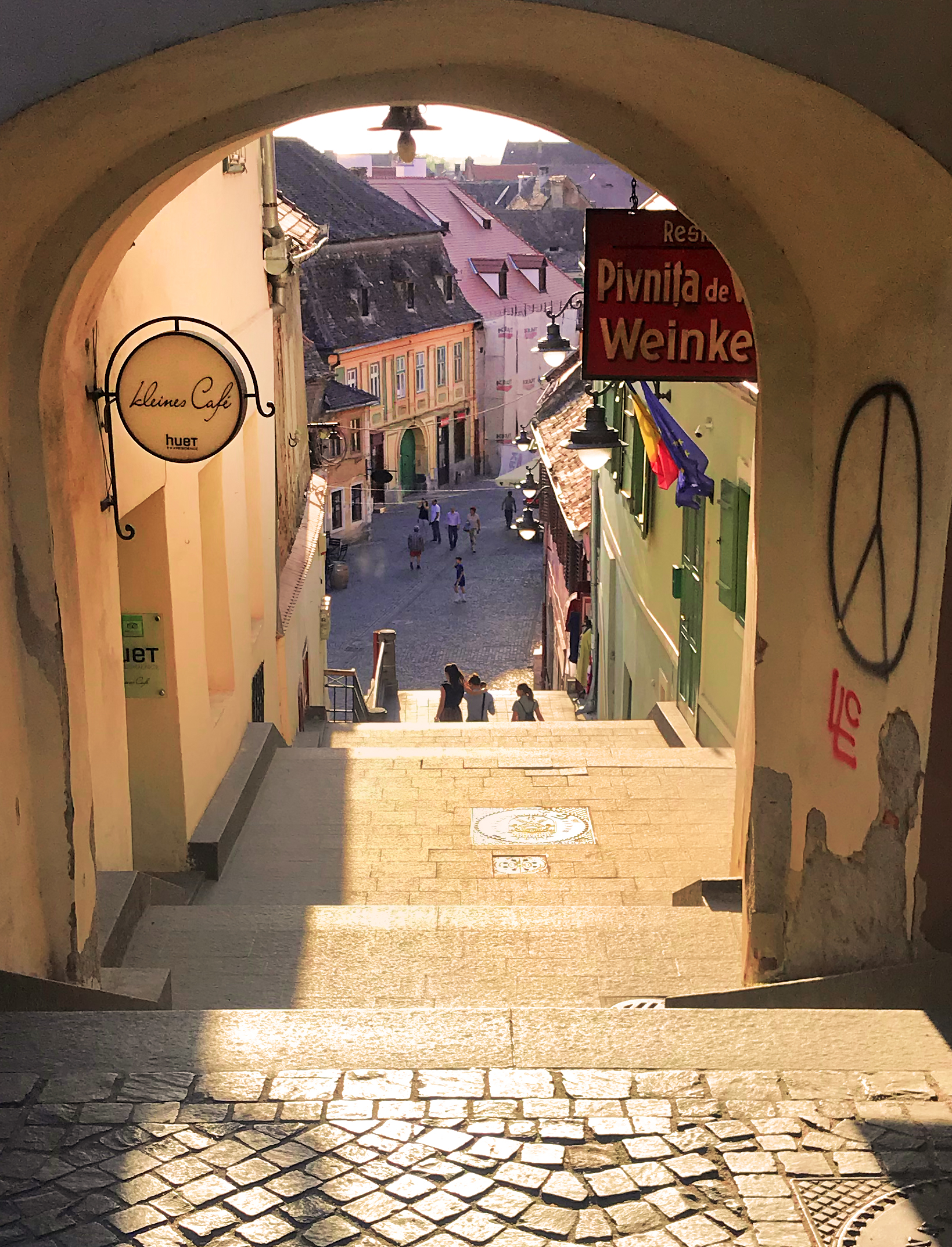 He showed genuine concern and asked if I was fe

eling alright. I assured him that I was, and he went off to retrieve a perfectly acceptable cuppa. My neighbor in Sebeș (remember I mentioned him earlier) told me that people in Romania only drink black tea when they’re ill.

Now John, the OhioIANews editor, asked me to limit myself to 1,100 words, so I’m sure he’ll be thrilled to see that I did a full page on Romania and didn’t even get my first breakfast yet. 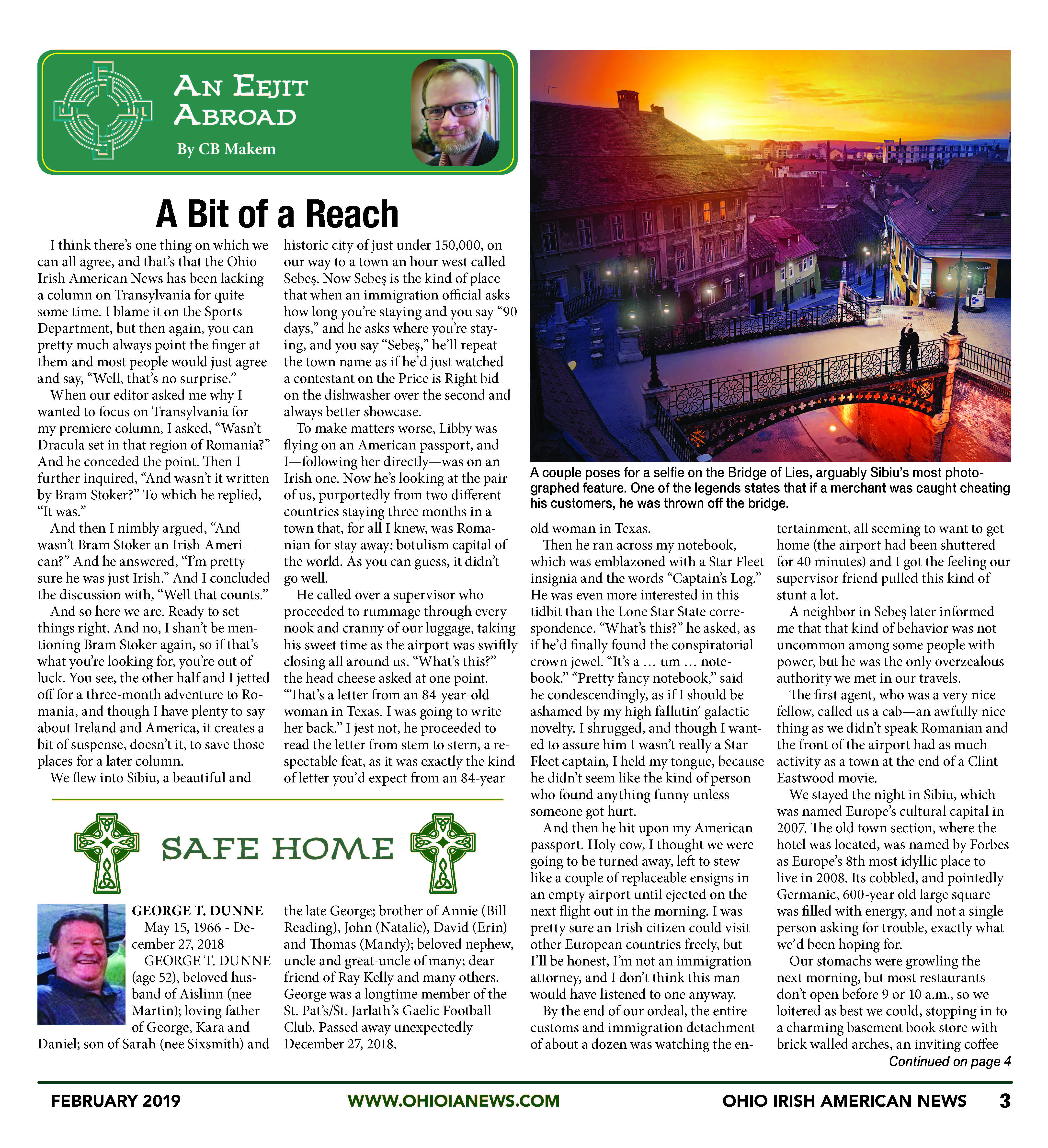 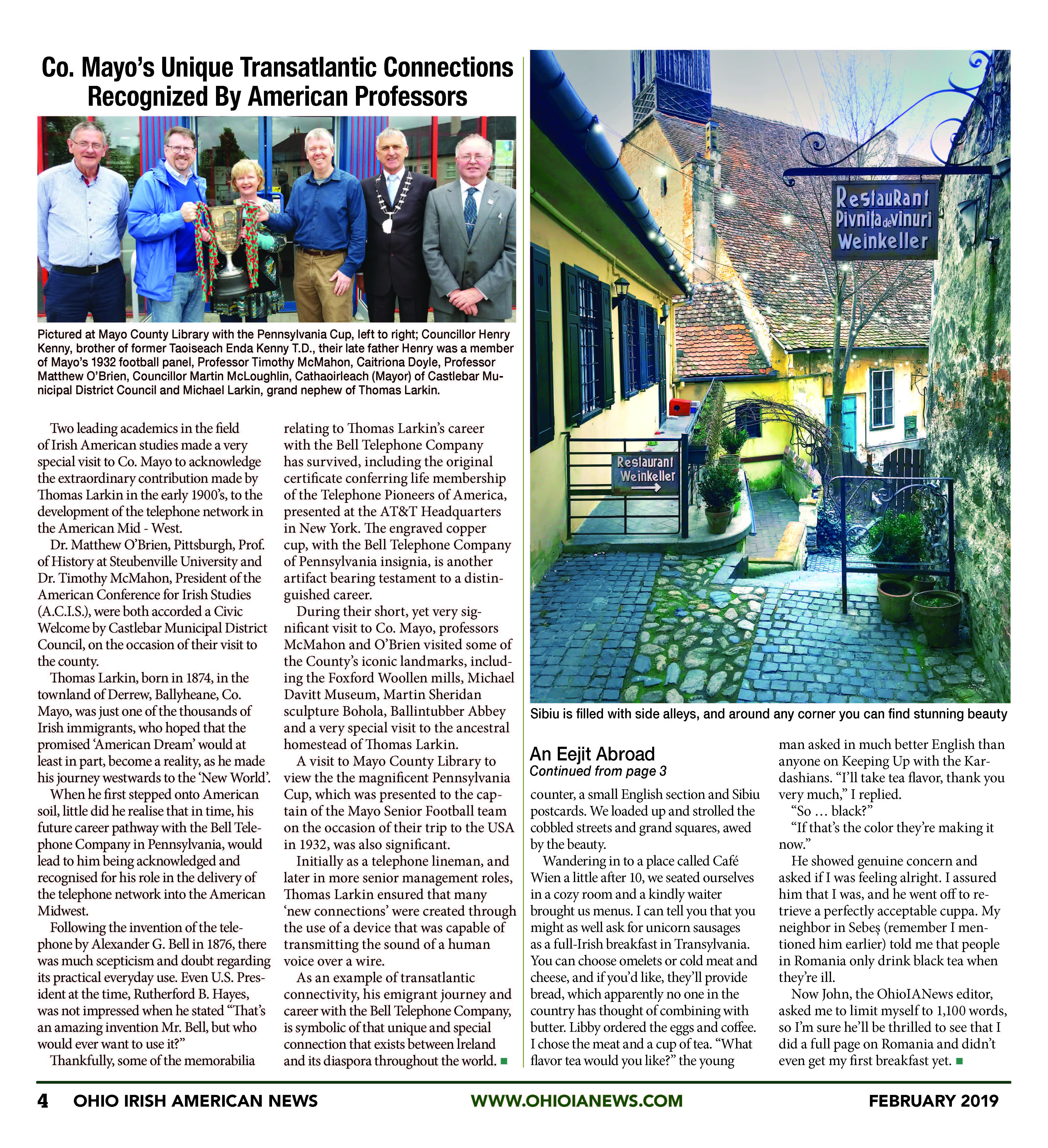 At Home Abroad: An American Tradition